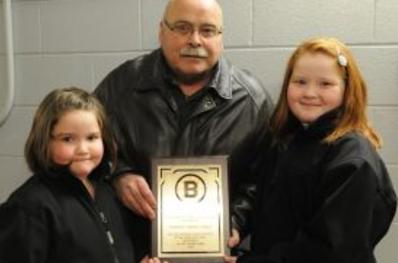 The 1946-47 Moncton  Hawks lost to the Hamilton Tigers in the Allan Cup Canadian Senior hockey semi-finals at Maple Leaf Gardens in Toronto. The Hawks included Windy Steele, Buck Whitlock,Bucko Trainor and Maurice "Mousie" Dowling.  A pretty good "who's who" of Island hockey in the post war 1940's. Dowllng led Moncton with 37 goals,  35 assists and 72 points as 27 year old.. 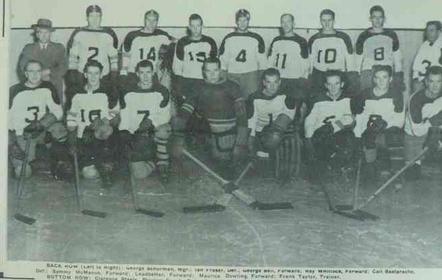 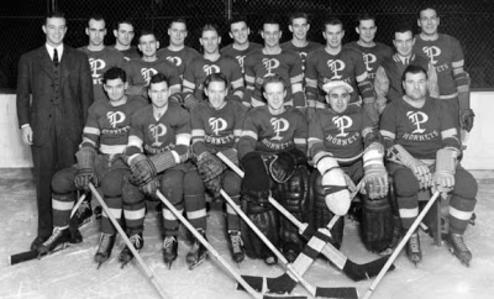 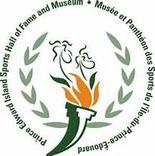 Many Canadian youngsters dream of being a hockey star at an early age. If you are born in the True North, you are bound to be brought up on hockey. For Clarence Steele of Summerside, PEI, born in 1919, hockey was a passion at an early age and he became one of the few to make it a career, landing in the upper minors just before World War II broke out.

Better known as “Windy” by the fans, Steele was an exceptional hockey player as a thirteen year old, playing for Summerside High School.  A year later he scored a goal in his first game for the Summerside Crystals in a victory over the Victoria Unions. He became a regular in the line-up for the Crystals at age fifteen and in 1933-34 he joined the Charlottetown Abbies.  That team would make Island history as the Abbies won the Maritime Junior Championship and went on to defeat the Quebec champs, the Montreal Cranes before bowing to the Toronto St. Michael’s  Juniors in the Eastern Canadian Championship. The Abbies defeated Montreal, 8-1 after tying, 4-4 in the opening game of the two-game total point series. St. Mike’s bounced Charlottetown, 12-2 and 7-3 to advance to the Memorial Cup final. The Majors beat Edmonton Athletics, two straight to win the national junior hockey title.

Then came the opportunity for Steele to enter professional hockey.


Steele joined the pro ranks in 1936-37 when he signed with the Baltimore Orioles where he joined another Islander, John Squarebriggs in the EHL. They would be team mates for the next two seasons. Steele enjoyed a banner rookie season with 17 goals in 34 points and was even more impressive his second year compiling 30 goals and 53 points in 50 games. Steele would wind up as one of the top players in the Eastern Hockey League short history. He was a second team all-star in Baltmore where he averaged 1.7 points a game. He was also fourth all-time points with 47 goals, 40 assists and 87 points. His contract was bought up by the Hershey Bears of the American Hockey League, the top farm club of the NHL’s Boston Bruins.  In 1938-39 the Summerside native scored 14 goals and added 10 assists for 24 points in 53 games with the Bears. He’d play with Hershey, the Providence Reds and the Pittsburgh Hornets of the AHL over the next three years, which marked the start of World War II. Steele’s point totals were better than the average player in the league.

He played on the “Spud Line” in Pittsburgh with Islanders Pete Kelly and Harry Currie and what’s even more startling is that he was only 22 years old.  What’s disappointing is the fact he was only 24 when he played his final season in the AHL. Steele joined the Canadian Army to fight in the War.  His AHL totals included 59 goals, 61 assists for a total of 120 points in 198 games. Windy played a year on defense with Providence and knocked down the famed Eddie Shore, seven times in one game in a contest against the Springfield Indians. Steele was modest when asked about the feat. He simply stated Shore was veteran in his final days on the ice and he was on his way up.

He died suddenly on July 12, 1969 at the age of 50.  In July, 1973 he was inducted into the PEI Sports Hall of Fame in his native Summerside. One of the city’s twin rinks was named in his honour.The Steele Arena.  Windy Steele mostly likely would have played in the NHL with the Boston Bruins, had it not been for his service to his country in the War. But the Bruins organization did not forget him. In January, 2012, the Bruins Alumni played a benefit game at Summerside’s Credit Union Place and special plaque was presented to Windy’s son, John Steele and great grand daughters, Cadi and Tori(see Summerside Journal-Pioneer photo). It recognized the stellar minor league career of one of the Island’s best young hockey prospects. Ever. 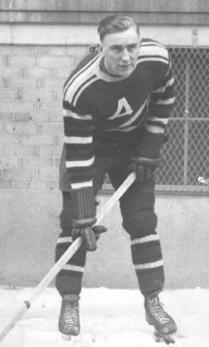