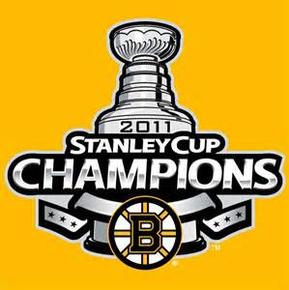 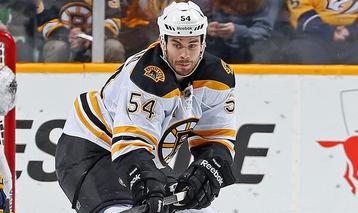 Adam McQuaid is good at what's called "fronting" in the NHL these days with a knack of protecting his goalie in front of the net and blocking or attempting to block a lot of shots. He says the game has changed as the clutch and grab technique is a thing of the past.

McQuaid is not an offensive minded defenseman but can lead the rush and has a strong shot from the blueline.  He would rather set up the Bruins forwards and stay back on defense.

In January, 2021 Adam  McQuaid announced his official retirement from the National Hockey League citing his doctor's advice and the need to be with his new family including son Roman. McQuaid said he left with "no regrets" but countless injuries finally steered him to making the decision. His last game was on March 28, 2019 with the Columbus Blue Jackets. He was diagnosed with a herniated disc in his neck from that game. A 12-year career saw him play with Boston, the NY Rangers and Columbus.

A Career Comes to an End 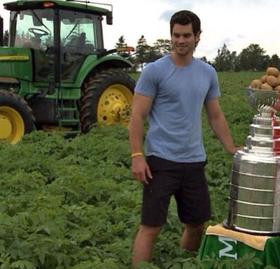 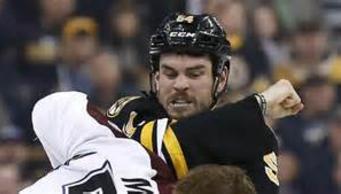 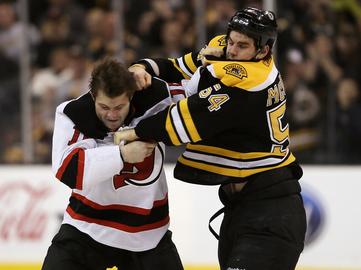 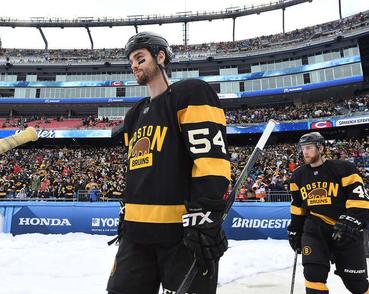 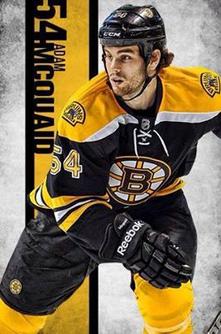 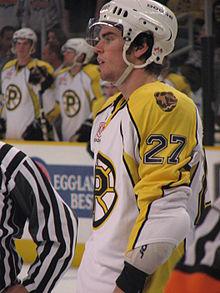 Adam McQuaid, who signed a four year contract with the Boston Bruins in 2015, is well known for his interest in the fans.  He’s been one of the main stays in the annual Charlottetown Boys & Girls Club Celebrity Golf Tournament held each July at the Belvedere Golf Club and meets with Island fans, many of them youngsters when they attend a game or practice in Boston.Quaider was greeted by thousands of fans when he brought the Stanley Cup home to PEI in 2011. He's also appeared in the annual Gold Cup Parade held each August in Charlottetown as part of Old Home Week. 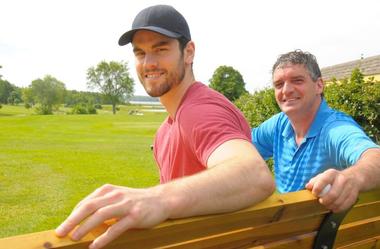 .Looks can be deceiving.  On the outside defenseman Adam McQuaid,a Cornwall, PEI native is a humble, smiling handsome dude who is great with the fans and always the gentleman off the ice. He’s also an imposing giant of a man who is a shrewd defender in front of the Boston Bruins net, one of the best fighters in the NHL and a guy who has survived countless injuries in his long career in Beantown. It’s led NBC analyst Pierre McGuire calling him “one tough hombre.” It’s hard to imagine the guy they call “Darth Quaider” ever losing a fight on the ice. He’s gone skate-to-skate with some of the best and it’s a rarity to see at the bottom of the heap looking up at an opponent. For the most part he’s skated away after a bout adjusting his elbow pads with a look satisfied look of victory on his face as he makes his way to the penalty box. The nickname “Darth Quaider” was given to him by team-mate Andrew Ferrence. At 6-5 and 209 lbs. he stands out in a crowd.  McQuaid is one of the big boys.

He was born on October 12, 1986.  His minor hockey career saw him move up to the Major Midget Cornwall Thunder.  He got a call up with the Summerside Western Capitals during the 2002-03 season.  He was also Captain of the 2003 PEI Canada Winter Games hockey team. That spring McQuaid was chosen in the second round of the OHL draft (43rd overall) by the Sudbury Wolves as a 17-year old overage player.  The next four seasons were in Northern Ontario beginning in 2003-04 and lasted through 2006-07.  His final season saw the Wolves win the Eastern Conference of the OHL for the first time in 31 years under Head Coach and former NHLer Mike Foligno (Detroit, Buffalo, Toronto, Florida in the 80’s). The Columbus Blue Jackets drafted the defenseman in the second round and 55th overall in the summer of 2005. The first round resulted one of the best drafts ever the NHL.  Sidney Crosby was first overall and taken by Pittsburgh.  Anaheim took Bobby Ryan second and goalie Carey Price was the fifth choice drafted by Montreal. McQuaid never played with Columbus. He continued to skate with Sudbury in Major Junior and was traded to Boston for a fifth round pick in 2006. Quaider joined the Providence Bruins of the AHL in 2007-08 and played there for most of the next three campaigns. His best year was 2008-09 where he played 78 games scoring 4 times and adding 11 assists for 15 points plus a career high of 141 minutes in penalties. Another tough hombre from PEI was one of his team-mates for a brief time named Nathan Saunders.  You get the idea that Adam McQuaid is not an offensive-minded defensemen and that is correct. But he can lead the rush and feed the puck to the Bruins multitude of talented forwards. He has had his share of important goals and assists none-the-less.

The next step was playing with the big team and his first NHL game with Boston on December 19, 2009.  McQuaid played in 19 games in 2009-10 and scored his first NHL goal on February 7, 2010 against Montreal and on goaltender Jaroslav Halak.  His #54 became a mainstay at the TD Garden. The following season would be a magical one for the rookie rearguard. It was also the start of series of injuries that would plague him during his career in the big leagues. It began with a freak injury where he tripped over a suitcase and suffered a concussion in 2010.  The new season would lead to a Stanley Cup ring and an unforgettable run toward the NHL championship.  McQuaid would play in 67 games gaining 3 goals and 12 assists for 15 points and a plus/minus record of plus 30 (he’s only had two minus seasons in his entire NHL career). The Bruins would go 16-9 on their way to the Cup, the sixth in their history. Boston overcame an early 2-0 deficit in the opening round losing both games at home to Montreal. The Bruins survived and forced it to a seventh game where they edged the Canadiens, 4-3 in overtime. Nathan Horton scored the winner at 5.43 of OT, set up by McQuaid.   Boston swept Philadelphia in the second round and outlasted Tampa Bay, 4-3 in the Eastern Conference final.  The Bruins blanked the Lightning 1-0 in the last. The only goal scored by Horton.

The B’s advanced to the Stanley Cup finals in a memorable series that went the distance. Boston won the deciding game with a 4-0 shutout in Game 7 on June 15, 2011. Patrice Bergeron and Brad Marchand scored twice each.  Goalie Tim Thomas was in the nets for the Bruins.  McQuaid had four assists in 23 playoff games. He brought the Stanley Cup home to Cornwall on Adam McQuaid Day, August 28, 2011. The Cup made its way to schools Quaider had attended and even a potato field and his father’s house. An estimated 15,000 people took in a parade down the TransCanada Highway to Cornwall’s town hall and the APM Centre where he played as a youngster. McQuaid had seen Islander Brad Richards parade the Cup through Murray Harbour in the summer of 2004 and dreamed about doing the same his hometown. That dream came true just seven years later.

Injuries have played a big part of the defenseman’s career. In 2012 he was given a vicious hit by Pittsburgh Penguin enforcer Matt Cooke.  Blood clots located near his collarbone led to a pair of emergency surgeries in October, 2012.   The following January on his return he suffered a knee injury.  He also missed 11 games with a shoulder injury.

Another scary injury occurred March 4, 2017 when he was nicked in the neck by the skate blade of David Backes of the New Jersey Devils in a 3-2 Bruins win.  McQuaid dropped his stick and shook off his glove and grabbed his throat but saw no blood. He kept playing without his stick and even attempted to block a shot before finally going off the ice to the dressing room for repairs. It took 20-25 stitches to close the gash which was so close to a very serious and even life threatening cut.  He missed practice the next day but planned on playing Ottawa only two days later. 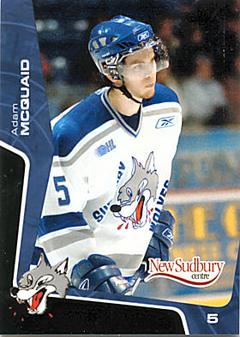 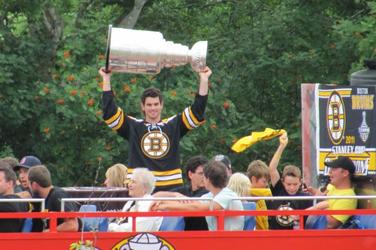 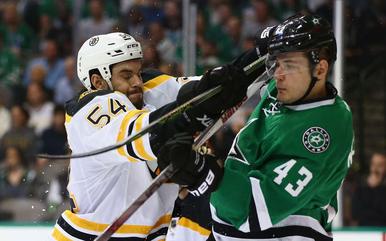 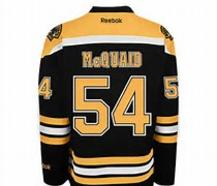 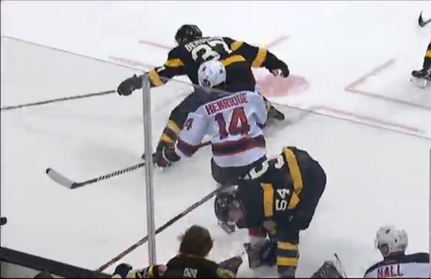 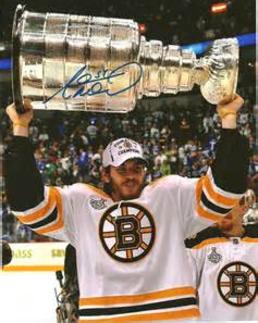