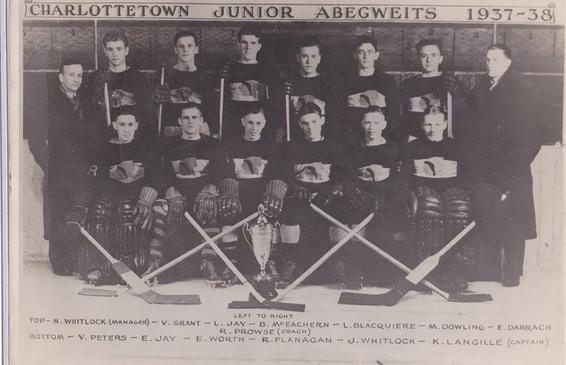 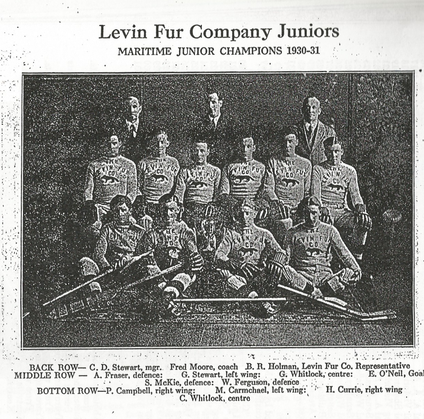 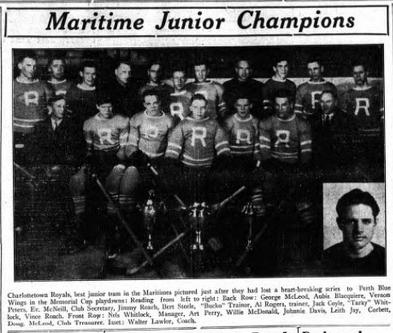 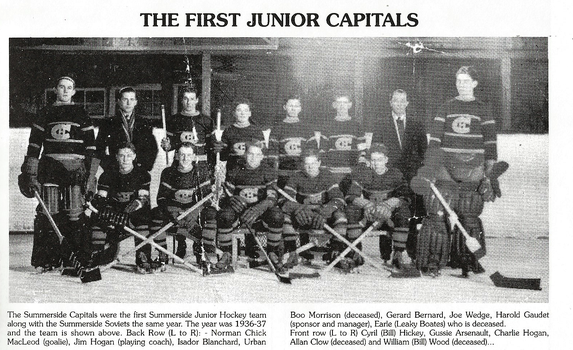 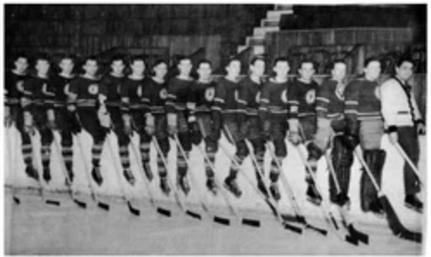 In 1939-40 the Charlottetown Royals were the only junior team on the Island who beat Saint  John in the Maritime semi-finals and ran over Truro, 22-5 in a two game total point set in the finals.

1942-43 would see the Sydney Bruins defeat the Royals, making their fifth straight trip to the Maritime finals, 11-7 in a total goals series. The Charlottetown Royals made it to five straight Maritime playoffs from 1939-1943.  That record would not be broken for 30 years until the Charlottetown juniors won six Island titles in a row from 1973 to 1978.

In 1944-45 the Freetown Roughriders won the Island but lost the semi-finals in a two game total point series to the Moncton Bruins, 25-6.  The first game was won by Moncton, 12-2 at the Bedeque Rink.

A newspaper advertisement for Starr Skates 1931 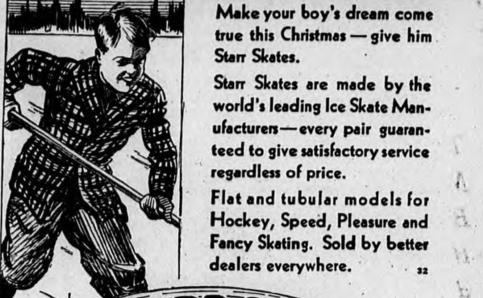 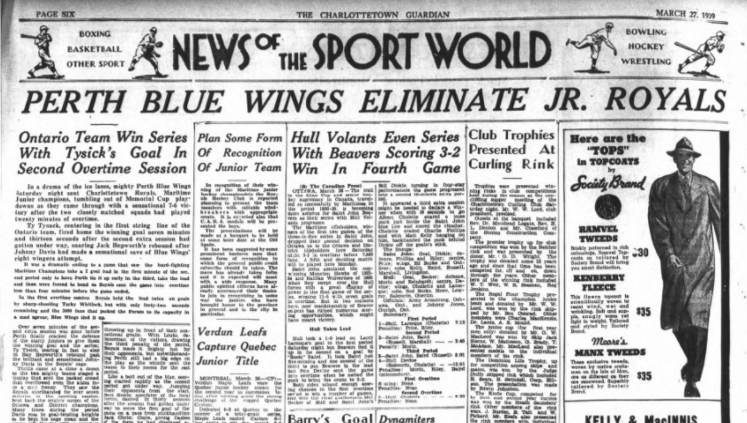 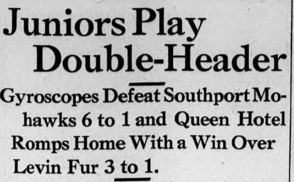 The post war years saw Island teams competing for provincial and junior titles through the late 40’s into the late 60’s with the Junior Islanders chasing Memorial Cup and Centennial Cup titles in 1969 and 1970.

It all began 40 years earlier with the rise of junior hockey on PEI.

The beginnings of modern junior hockey on the Island go back some 87 years.
Three junior teams were formed in 1930 in Charlottetown.
1930-31 Levin Fur Company Juniors or the Silver Foxes played at the spanking new Charlottetown Forum and won the Maritime championship.
The junior game was revisited by George H. Buntain who was a former senior player who felt younger players were not getting the encouragement necessary to speed up their hockey education. He played on the 1921-22 Abegweit  team that went 17-0 and won the Maritime Championship. He became a business man and saw the rise of junior hockey in Toronto and felt the need to get more young players enjoying the game at home. There was junior hockey around from the early 1900’s but it was not prominent on PEI.

Buntain consulted with his friends Fred Moore and Russ Chandler, both former team-mates and formed a league. Players and volunteers to organize the team were written in the Charlottetown Patriot newspaper and the response was overwhelming.
Three teams resulted that would play in 1930-31.  The Gyro Club  Gyroscopes, the Queen Hotel and the Levin Fur Company all decided to sponsor a club.  In 1931-32 the league expanded across the Hillsborough River to what is now Stratford with the Southport Mohawks  joining  the now four team league.
J.P. Simmonds, head of Central Creameries was named league President.

Coaches and managers were quickly named and youngsters were signed to form the teams which would be feeder clubs for the senior teams in future seasons.
Charlie Stewart became manager of the Levin Fur team and Fred Moore was named coach.  The team nicknamed the Silver Foxes won the Island title which was a first in junior hockey and won the first Maritime championship by blanking Moncton, 6-0 in the Moncton Stadium in the Best of Three final.
Some of the players on the team included centre George Whitlock, Harry Currie on right wing, Tiger MacKie on defense, left wing Murray Carmichael and Gordon Stewart, also on left wing.

The Silver Foxes returned as champs in 1931-32 defeating the Queen Hotel, 2-1 and 3-0 in the finals.  Opening night was held on December 19, 1931 at the Forum with a doubleheader.  They Gyroscopes beat the Southport Hawks, 6-1 and the Queen Hotel downed the Levin Fur Co. Silver Foxes, 3-1. Each team had ten players on the bench and the season lasted only about four months.

Gordon Stewart in the web series Island Voices talked about playing back in those days.  “We bought our own equipment back then.  A stick cost $1.00 to $1.50 (which would be about $21.00 today,” recalled the left winger. “Our protective equipment consisted of gloves, shin pads, and shoulder pads.  No helmets back then.”
With only ten players on the bench no team could afford injuries but if they happened the remainder had to take up the slack.

Charlottetown was home to some other outstanding junior teams in the Thirties. The Junior Royals were soon on the horizon and the junior brand of hockey had its beginning during the decade. The Royals won the Maritime Big Four championship in 1933-34 and played the Toronto St. Michaels Majors in the Memorial Cup semi-finals.  St. Mike’s with Bobby and Frank Bauer and a future Toronto Maple Leaf, Nick Metz won the Canadian Junior Championship over Edmonton.  Metz would play on four Maple Leaf Stanley Cup winners in the 1940’s.

Gordon Stewart played on that Royals squad and he admits he was in awe playing at Maple Leaf Gardens.  “There were 5,000 fans on hand for our practice when we first arrived. You just had to look up and see thousands of seats in the arena that went way up to the roof.”
On top of that 12,000 and 14,000 fans attended the games.  Put in perspective that was the entire population of Charlottetown in one building.
“Everyone on their team (St. Mike’s) made the pros,” Stewart remembered.  “Most of them played in the NHL.”

Another thing that factored into the series was the forward pass which had just become legal during the 1933-34 season.  Prior to the rule change the puck had to be passed laterally or behind on all plays on the attack. But now the puck could be passed ahead coming over your blue line.
“St. Mike’s was a lot better at it than we we’re,” said Stewart.  “It gave them an extra weapon they used to their advantage.”

In 1934-35 the Royals, Charlottetown Abbies and Summerside Crystals played as independents.  The Abbies beat  the Royals, three straight in the semi-finals and downed Summerside, 7-0 and 70-1 in the finals

1935-36 saw the Abbies, Royals and Charlottetown Rangers reach the playoffs.  Summerside and Kensington ice independent teams.  The Abbies beat the Rangers two straight in the City League semi-finals  but lost the finals in four games to the Royals who won the last contest, 4-1.  Summerside won a two game total point series, 4-3 over Kensington.   The Royals won the provincial final, 2-0 facing  Summerside and won by scores of 3-2 and 8-3.

Summerside had three junior teams in the 30’s, the Crystals,  the Capitals (named after the Capital Theatre) and the Soviets (named after a restaurant). Some of the players on those teams were Jim Hogan, Roy Crozier, Charlie Hogan, Allan Clow, Blackeye Clow and Walter Arsenault. The two clubs began playing in 1936-37.

In 1936-37 the Charlottetown Abbies lost the City League finals opener, 3-2 to the Rangers but won the next two games, 7-5 and 6-3.  The  Summerside Soviets  won the Town League in a sweep of the Crystals and downed the independent  Borden Nationals in the provincial  semi-finals.  The Abbies  won 7-1 and 4-3 in the finals facing Summerside but were stripped of the Island title because they used ineligible players.
The Charlottetown Rangers  downed the Soviets, 10-5 in a replay of the final.

1937-38 saw the Royals win the City League semi-final with a victory over St.Dunstan’s. The  Abbies won the final, 7-2 over the Royals and ran away with the provincial title game with a 23-5 rout of Borden

In 1938-39 the Royals were crowned champs, again. They beat the Summerside Capitals, 15-3 in a two game total point series to win the Island.
The Royals played in the Memorial Cup playoffs losing a memorable series to the Perth Blue Wings from Ontario.  Perth lost to the eventual Memorial Cup Champion Oshawa Generals that season.
That Charlottetown team had future stars Buck Whitlock and Bucko Trainor in the line-up on the team coached by Walter Lawlor. Others on the Royals included Bert Steele, Jack Coyle, Art Perry and Tarky Whitlock.

Perth won the opener, 6-2 but the Royals tied the series with a 7-4 victory in Game 2 of the Best of 3.
Whitlock led the Royals in an intense double overtime final facing the Blue Wings. He scored twice in the first overtime frame but Perth tied it up with 42 seconds left before 3,000 fans in the Forum.  In the end the Blue Wings won 7-6 in the second overtime.