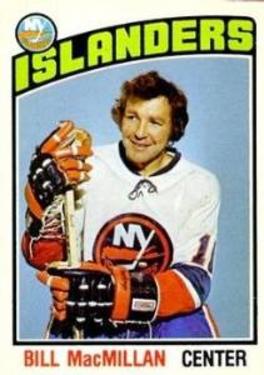 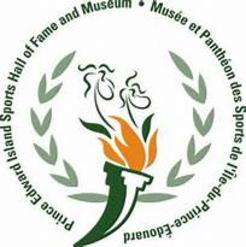 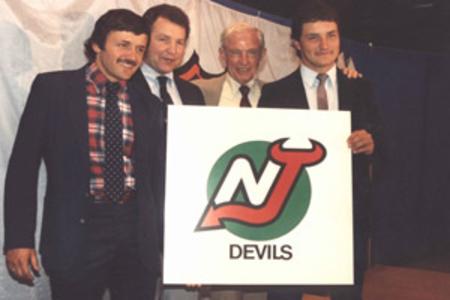 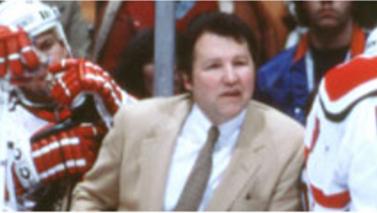 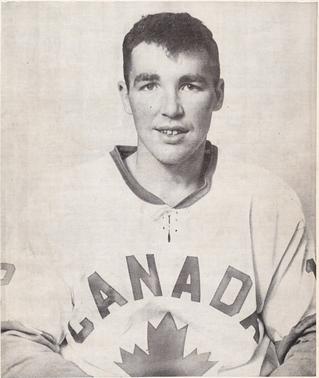 Few can say they played on Memorial Cup Champion, a regional university champion and later helped coach a Stanley Cup championship team and then returned back to the university ranks and coached another team to the Canadian national finals.  And let’s not forget being part of bronze medal team in the Olympics.

All those credentials belong to Bill MacMillan, born March 7, 1943 and raised in Charlottetown. Billy learned his early skills on backyard rink built by his father behind the family home on Alexander Drive in the Island capital. It’s on the backyard rink where the young MacMillan spent hours as he first learned to skate and practiced his stick handing skills. Soon he was playing minor hockey at the Charlottetown Forum where moved up the ranks from Paperweight to Pee Wee and Bantam in the early 1950’s. He then played for Queen Charlotte Junior High School on North River Road in the west end of Charlottetown under the guidance of Jack “Spy” Ready who was a pretty good hockey player himself and later became Mayor of Charlottetown (Spy also helped Errol Thompson get to the NHL in the early 70’s).  Bill helped Queen Charlotte to provincial titles in both hockey and rugby.  He also won a 100 yard dash championship.

His first Maritime hockey title came while a member of the 1958-59 Charlottetown Abbies Midget club which was coached by Orin Carver who had won a Memorial Cup with the Barrie Flyers earlier in the decade. He was recruited by Canadian hockey legend Father David Bauer who had him join St. Michael’s College in Toronto, a prestigious private boy’s school. MacMillan joined the St. Mike’s Majors who had lost their star Dave Keon who moved on to an NHL career with the Toronto Maple Leafs. MacMillan later became St. Michael’s captain and helped them to three Memorial Cup appearances. They won the Canadian championship in 1960-61. The #1 goaltender for St. Mike’s was Gerry Cheever who would make his mark in the NHL with the Boston Bruins.

MacMillan returned to the Island and joined the St. Dunstan’s University Saints under Coach Jack Kane.  He won an Atlantic University scoring championship, the MVP award and the 1964-65 Atlantic championship as a member of the Saints. He was soon reunited with his old St. Mike’s coach Father David Bauer who was head of the Canadian national team. MacMillan helped Canada to the bronze medal in the 1968 Olympic Winter Games in Grenoble, France.  MacMillan played with four World Championship tournaments with Canada. He scored the game winning goal in the 1967 Centennial World Invitational as Canada beat the USSR which was a rare instance back in the 1960’s.

Next stop was the NHL. Bill MacMillan signed with the Toronto Maple Leafs at age 27.  He had finally reached the big stage.

MacMillan’s debut came in 1970-71 under John McLellan who has succeeded Punch Imlach as Leafs coach just a season previous.

He enjoyed a good season as a rookie scoring a surprising 22 goals along with 19 assists for 41 points while playing in 70 games. He became the first native born Islander to scored 20 goals in a season playing right wing on a line with Dave Keon and Gary Monaghan. His new team mates included George Armstrong, Paul Henderson and Norm Ullman. Bernie Parent and Jacques Plante were the goalies.  The Leafs finished 37-33-8 (ties). He received less playing time the following season and in 1972 was taken in the NHL expansion draft by the Atlanta Flames. A season later he was traded to the New York Islanders for Arnie and where he would continue for several years as a player then coach.

The 30-year old MacMillan was one of the older players on the young Islanders who were building for the future under Head Coach Al Arbour. The team featured 32-year old veteran Ed Westfall and young 19-year old defenseman and budding superstar, defenseman Denis Potvin.

He played three seasons with the Islanders in Uniondale on Long Island at the Nassau County Coliseum before becoming a player/coach with the Fort Worth Texans of the CHL.  MacMillan won the Coach of the Year Award winning the Jake Milford Trophy (named after the former Island player and coach) in 1977-78 after playing in a dozen games with the club a year before. Another Islander, Garth MacGuigan was a member of the Texans who finished 44-29-3 (ties) and won the  CHL championship.

MacMillan was summoned by Arbour to become an assistant coach in 1979-80 as the New York Islanders begane their early 80’s dynasty and won the Stanley Cup.

Next came a head coaching job with the expansion Colorado Rockies in 1980-81 where he succeeded Don Cherry. The Rockies were 22-45-13 (ties) in 80 games.  The following year he was named General Manager of the team in Denver. Colorado moved to New Jersey where MacMillan would be reunited with brother Bobby and UPEI Panther grad Dave Cameron. The Devils were called a “Mickey Mouse organization” by Wayne Gretzky.  They finished 17-45-14 in 1982-83 and 17-52-7 in 1983-84.

MacMillan returned home to PEI after that season to run a family farm.  He also made a contribution to his community with some volunteer work.  He was quite involved in Camp Gencheff, a summer camp for special needs children and adults in Bellvue Cove not far from Charlottetown.

He was named “Islander of the Year” in 1990.  MacMillan also served as PEI Ambassador of Youth in 1985 during the International Year of Youth.  He was a store manager for the PEI Liquor Commission for many years and was involved in the Union of Public Service Employees on the Island.

His coaching career was not quite over. He was behind the bench as the UPEI Panthers won the AUAA title in 1990-91 in a season that started at the old Charlottetown Forum and ended at the new Civic Centre before a trip to Canadian Nationals in Toronto. He succeeded the legendary Vince Mulligan as coach and gave UPEI its fourth conference title in what was an amazing decade for the university team.

Bill MacMillan had only 184 minutes in penalties in 446 NHL games. He was known for showing respect for his team mates and opponents as well as the fans. A solid defensive forward, he was known as a tedious checker. He also had some big nights scoring three goals for the Leafs against Detroit on Christmas Day, 1971 and another hat trick on October 28, 1974.

Bill MacMillan was inducted into the PEI Sports Hall of Fame in June, 1985.

From a backyard rink in Charlottetown to a Memorial Cup, a bronze in the Olympics and a Stanley Cup.

Billy MacMillan made his mark. 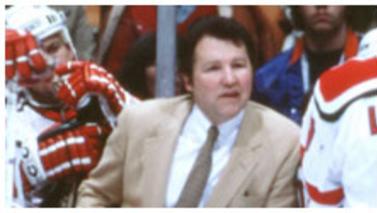 MacMillan (row 2, 2nd on the right) was a member of the Memorial Cup Champion St. Mike's Majors in 1961 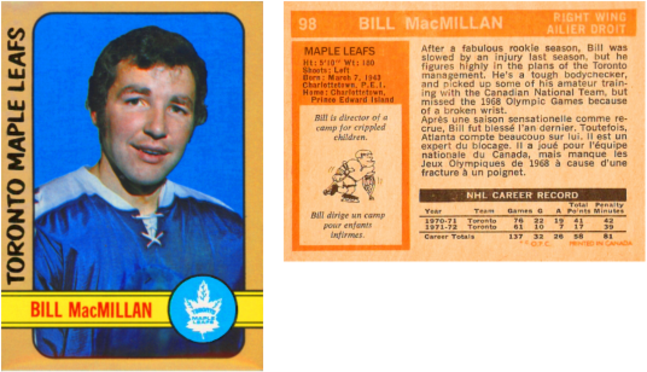 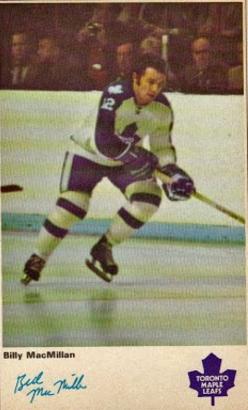 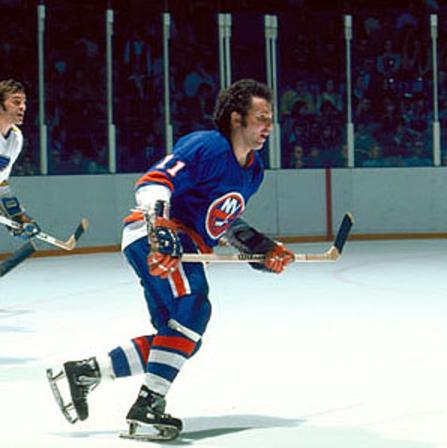 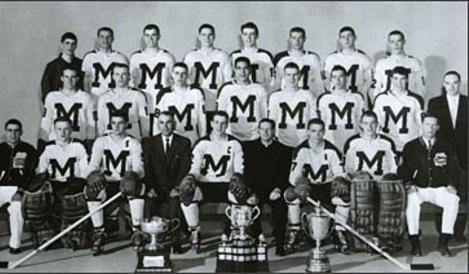 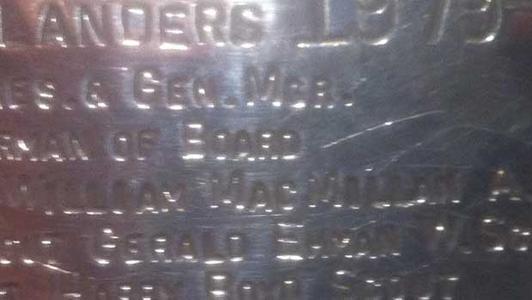 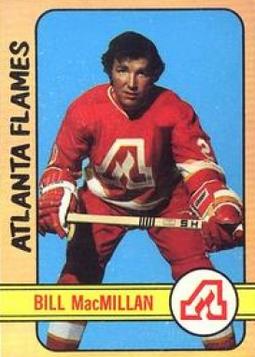 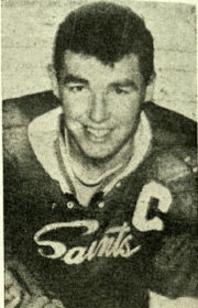 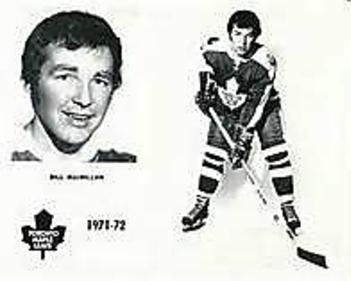 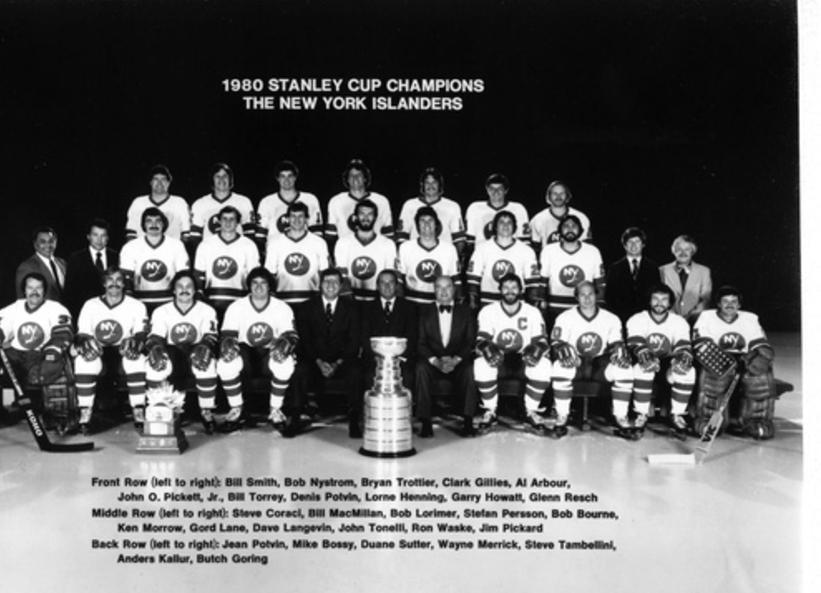 A member of the 1961 Memorial Cup Champion St. Mike’s  Majors, the 1965 St. Dunstan’s Saints Atlantic university champs, a bronze medal winner with Canada in the 1968 Winter Olympics, a fine NHL career with Toronto, NY Islanders, Atlanta Flames and an assistant coach with the NY Islanders Stanley Cup dynasty in the early 1980’s. MacMillan also coached UPEI to an AUAA Championship in 1991.  A truly remarkable career both as a player and coach. He was a head coach in Colorado and New Jersey in the NHL. 7 NHL seasons, 446 GP, 74 goals, 77 assists, 154 points. MacMillan played in the NHL between 1971 and 1977.