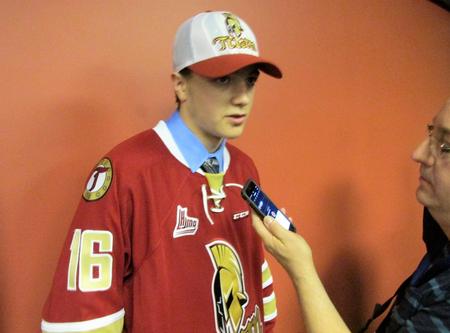 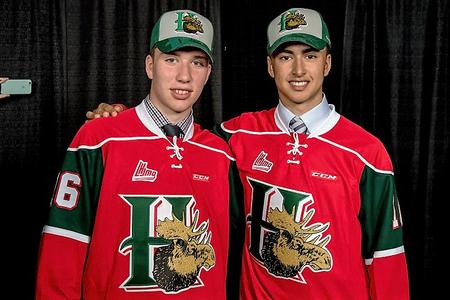 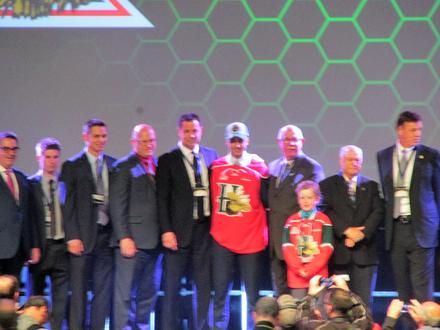 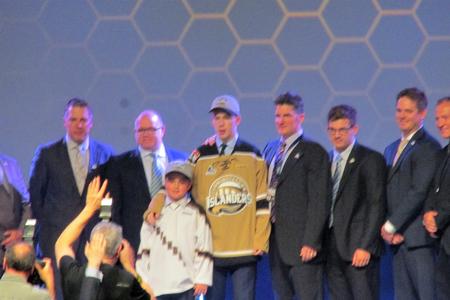 Marc-Olivier Alain the #1 pick of the Charlottetown Islanders

Charlottetown has held two Quebec Major Junior drafts of midget aged players. The first was in in June, 2006 where Yann Suave of  Chateauguay Quebec MAAA was selected as the first overall pick by the expansion Saint John Sea Dogs. The Quebec Draft has been going on since 1972 with the biggest name to go #1 as Sidney Crosby chosen by the Rimouski Oceanic in 2003. The only Islander to be selected #1 overall was Brandon Gormley, taken by Moncton in 2008.

The big winners in the 2016 Quebec Major Junior Hockey League Draft held on June 4, could be either the Halifax Mooseheads or the Baie-Comeau Drakkar, depending on how things work out in the future. The Drakkar spearheaded three trades in the first five picks and turned three sure first round picks into four. Halifax meantime got the first and second picks that were ranked 1-2 by Central Scouting.

The Charlottetown Islanders added a defenseman, goaltender, and forward with their first three choices at the 2016 Draft held at the Eastlink Centre in Charlottetown.

Halifax GM Cam Russell pulled a coup of sorts grabbing the first two choices in the draft after much debate over whom they would go after either top rated Gatineau Midget AAA forward Benoit-Olivier Groulx or hometown defenseman defenseman Jared McIsaac from Cole Harbour.  In the end Russell and the Mooseheads got their cake and ate it too. Groulx had 20 goals and 51 points for the Gatineau Intrepide in Quebec MAAA in 2015-16. He is the son of long time Gatineau Olympiques players and head coach Benoit Groulx who is now coaching the Syracuse Crunch in the AHL, the Tampa Bay Lightning’s top farm club. McIsaac is a high scoring defenseman on the Cole Harbour MAAA team. He had 14 goals and 36 points playing on the blueline in 2015-16. He and Groulx were team mates on Canada’s silver medal winning team in the Youth Olympics. McIsaac had expressed his non-desire in playing in Quebec thus the decision to make the trade for draft picks by the Drakkar.

Baie-Comeau like Halifax struggled during the past season but replenished its system adding speedy forward Gabriel Fortier of Lac St-Louis  as the fourth pick then adding defenseman Xavier Bouchard from Amos (chosen fifth),  forward Shawn Element from Trois-Rivieres (the 8th overall pick, another forward, Edouard St-Laurent from Levis in Quebec MAAA (who went as the pick #16).

Drummondville had the third selection and took goalie Olivier Rodrigue who played for Jonquiere.

The Charlottetown Islanders made some curious moves while answering some needs in Head Coach Jim Hulton’s first time around in the General Manager’s role.  They surprised by taking the 40th ranked player, 15-year old defenseman Marc-Olivier Alain from Quebec City who played for Semaire St-Francois Blizzard in Quebec MAAA. The righthanded shooting defenseman won’t turn 16 until July. He had no goals and 7 assists in 42 games in the past season and was a +1 on defense. He’s 5-11 and 156 lbs and growing.  Alain was the 18th pick overall in the first round.  Alain says he is very pleased to be with a contender like Charlottetown. His brother, Alexandre is a 19 year who was dealt from Gatineau to Blaineville on Friday. Hulton says although Alain was scouted as going in the 3rd round the Islanders scouts felt he was underrated and got him early.

The Islanders made a trade as they dealt defenseman Luc Deschenes to the Acadie-Bathurst Titan for defensemen Guillaume Brisebois and Jake Barter. There were thirteen trades on Friday prior to draft day. Earlier a deal for three draft picks including two this year was arranged with Halifax who received Bradley Kennedy.

Forward Nathaniel Doyon from St-Georges-de-Beauce, Quebec turned out to the Islanders second round pick (36th). He was ranked 37th prior to the draft. The right hand shooting 6-0, 177 lb. Doyon had 9 goals and 16 points in 45 games last season with the Levis Commandeurs in Quebec MAAA but had 2 goals and 2 assist in three playoff games.

The third pick by Charlottetown fitted a need for a back-up goalie to Matt Welsh who is likely to take over the top spot with Mason McDonald expected to turn pro in the Calgary Flames organization. The Islanders went for Halifax native Dakota Lund-Cornish who had a 3.15 against average for Halifax McDonalds in Nova Scotia MAAA. He posted a 1.83 average in the playoffs. The 6-3, 194 lb. goalie backstopped the Nova Scotia Bantam champs in 2013-14.

The Islanders next choice was 93rd in the draft taking defenseman Dominic Hachey from the Moncton Flyers.

The Acadie-Bathurst Titan had the sixth pick and took Summerside born defenseman Noah Dobson who played for EC Red Bull Salzburg in Austria. His family comes from Bathurst so he says it’s like going home.

Another Wild defenseman, Clark Webster was the 104th pick of the Moncton Wildcats. Chicoutimi took Kensington centre Frank Fortin from Cornwall, PEI as the 120th pick. The Moncton Wildcats selected goalie Tyler Caseley from Kensington, who played for the OHA Mavericks Maroon in MAAA.

Over 2,000 out of province visitors including players, parents and friends were on hand for the draft weekend and stayed at motels and hotels in the Charlottetown area.

Wayne Long, Charlottetown Events Development Officer and co-chairs of the host committee Lennie Kelly and John Abbott say it was a great success. 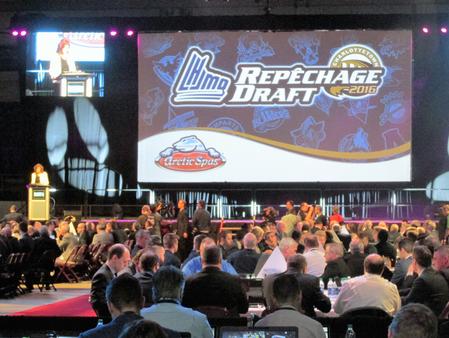 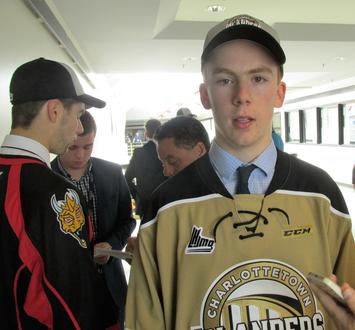 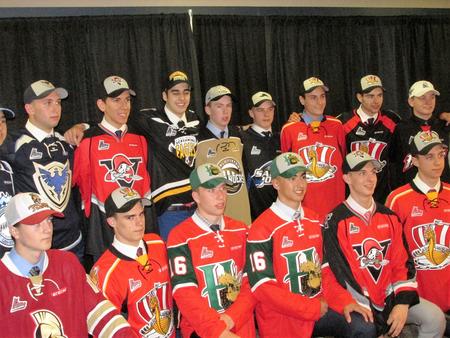