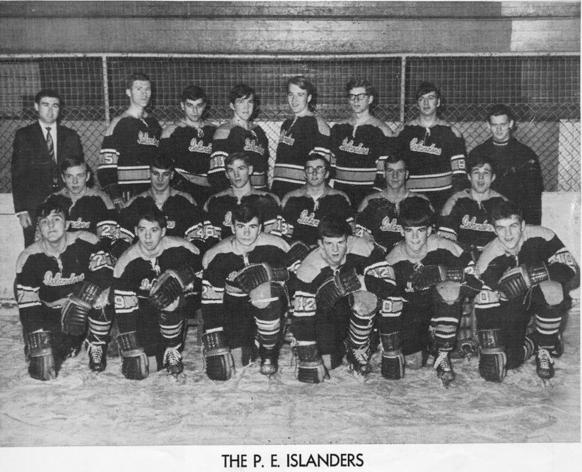 The Brawl - This grainy photo from April 13,1970 shows the donnybrook on the ice at the Forum. Note the Charlottetown Police officer trying to break it up. The Islanders defeated Quebec, 6-4 in Game 2. 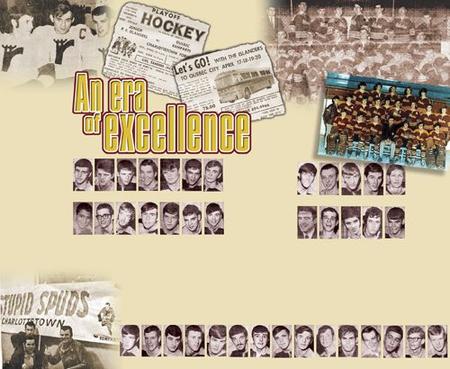 Alan MacAdam (left) watches Remparts goalie Gilles Meloche make a glove save while falling to the ice in Game 6 won by the Remparts, 5-2 and the series, 4-2

The Junior Islanders won the Dudley Hewitt Trophy as Eastern Canadian Jr. A Champs in 1970-71 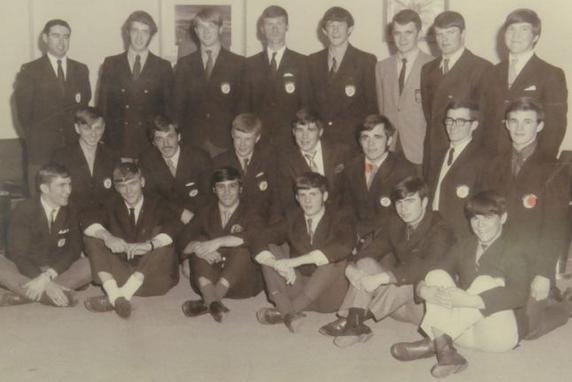 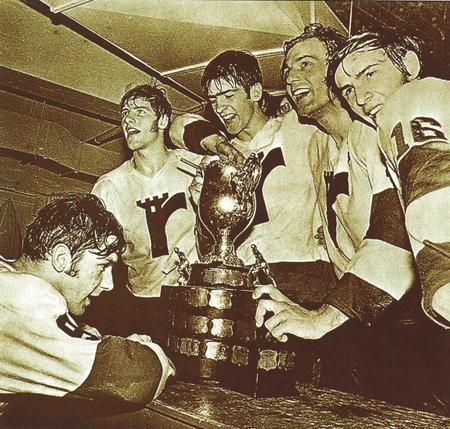 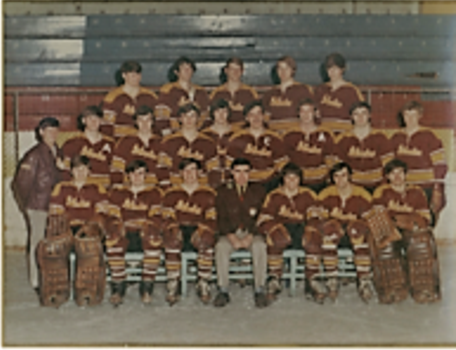 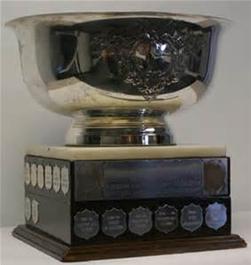 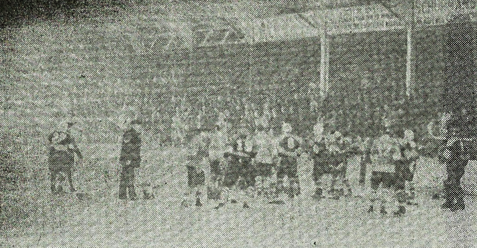 The original Maritime Junior Hockey League lasted just three seasons but produced some of the greatest memories in Atlantic hockey history. And likely Prince Edward Island’s greatest team ever – the 1969-70 Charlottetown Junior Islanders.  That team produced not only memories of a fantastic season – but also nine future professionals including three NHL stars and a WHA standout.  No other Island junior team has had that kind of success since that time. Al MacAdam, Bob MacMillan and Hilliard Graves all went on to long NHL careers and Kevin Devine was a WHA star in the 1970’s.  Bob MacGuigan, Angus Beck, Tim Steeves, Tom Steeves, and goalie Ray Gibbs went on to have minor pro careers.  That is nearly half the roster of the ’69-70 Islanders that turned professional.  MacAdam was drafted by the Philadelphia Flyers, MacMillan by the New York Rangers, and Devine by both the Toronto Maple Leafs and San Diego Mariners (WHA). The California Golden Seals selected Beck and Gibbs. Tim Steeves was a draft choice of the Vancouver Canucks.  Graves got his NHL start with California.   You can also add Peter Williams, who played on the 1970-71 Islanders who was drafted by the Maple Leafs.

The Halifax Junior Canadiens won the Maritime Junior championship in 1968-69 but lost to the Hull Beavers in the Memorial Cup eastern quarter-finals, 4-3 in the Best of 7.   In 1970 junior hockey was split into two categories, Tier I (Major Junior) and Tier II (Junior A). That change led to the demise of the Maritime League within two seasons with historic results for the Charlottetown franchise in the loop.

Next the Islanders defeated the Fredericton Chevies 3-1 in a Best of 5 series to win the Atlantic final.  That was followed by Charlottetown eliminating the Ottawa M&M Rangers in five games, 4-1 in Eastern Memorial Cup quarter-finals.  Ottawas’s line-up included future Montreal Canadiens great Larry Robinson. The Islanders won the opening games of the series, 7-5 and 3-2. Ottawa won its only contest, 4-3 in game three and then the Islanders finished things off with 5-3 and 2-1 victories.

The Eastern Canadian semi-finals pitted the Quebec Remparts starring Guy Lafleur, Jacques Richard and goalie Gilles Meloche – all future NHL stars. There may have been a collective “gulp” by the Islanders when looking at the Remparts potent line-up but having already beaten a good team like Ottawa, the Island players were ready for another battle.

On Sunday, April 12 the series began with an afternoon game and the Islanders shocking the Remparts, 3-1 before a packed, hockey fevered crowd of over 2,700 at the Forum.  Lafleur, who 103 goals and 67 assists in 56 games in the regular season, scored the only Quebec goal on Islanders goalie Ray Gibbs. Al MacAdam set up Dale Turner on what proved to be the game winner in the second period. Gibbs made 37 saves in the Islanders end.  Turner and Bobby MacGuigan were asked to shadow Lafleur by Coach Jack Hynes.   Tickets were at a premium going for $2.50 reserved and $2.00 rush.   The Islanders were up 1-0 on the eve of what would be the game of the century on PEI.

The Islanders won the game on the ice, 6-4 with Dave Murnaghan and Bobby MacMillan scoring twice before the game was called by Cape Breton referee Jack Johnson at 14.57 of the third period. It was more than hockey, it was war as major brawl broke out.  Both benches emptied with 5.03 left in regulation time. The bench-clearing brawl ensued. Fights actually broke out early in the first period as Gordie Gallant tangled with the Remparts Rejean Giroux and Islanders Captain Hilliard Graves dropped Quebec’s Bill Landers with a hard right. The bench-clearing brouhaha resulted from the Remparts Roland Goyette cross checking MacGuigan and then hitting him again. Landers took a run MacGuigan and the benches emptied.

The game was over but the hard feelings continued. Remparts star Andre Savard was arrested after being ejected. Savard is alleged to have directed foul language at Charlottetown City police officer and was taken off to jail for a few hours.  Savard would later go to Provincial Court and was fined $20 for disorderly conduct.  Pius Callaghan, President of the Maritime Jr. Hockey League, stated, “It was the poorest display of sportsmanship I have ever witnessed.”   The Remparts protested the game.

The Quebec Justice Minister Remi Paul, called on PEI’s attorney general, Elmer Blanchard, to begin a full investigation into allegations of police brutality toward the Remparts players. Later in early May, Blanchard reported that the RCMP investigation into police brutality found no evidence to support the charge. The CAHA ruled against the Remparts protest. But the governing body of hockey did suspend Remparts coach Maurice Filion two games for his conduct in game two, and Islanders coach Jack Hynes one game for failure to keep his players on the bench when the brawl started.

Fights broke out before and after the game and even in the stands. Some fans pelted the ice with coins, eggs, apples and even some chairs that were directed at Quebec players.  Islanders star Bobby MacMillan says in those days brawls were all too common. He says the Forum brawl was nothing compared to the 400 fans who jumped on the ice in Sydney in a game against Cape Breton.

Quebec’s protest was over a lack of adequate police protection and later police brutality. A Quebec newspaper reported Savard, a 17-year old, was punched in the stomach by a Charlottetown police officer outside the Forum as he was being handcuffed and taken away while another officer held his neck.  Quebec fans would offer some payback of their own as the series shifted back to the Colisee. They brought potatoes and eggs to the next game.  The Remparts would not lose in the series, again.

14,665 fans were on hand to watch the Remparts cut the series margin to 2-1.  Quebec prevailed, 6-2 as Andre Savard, freed from jail in Charlottetown, scored twice. It was another rough game with 34 penalties handed out. Islanders goalie Gibbs faced 46 Remparts shots as Quebec shot back.

Guy Lafleur and Jacques Richard scored twice each in a 4-1 win over Charlottetown which evened the series, 2-2.  Quebec scored three times in the third period to secure the win.

The Remparts decided to return to Charlottetown to complete the series after a team meeting. Quebec won the game, 6-2 in front of another crowd of 2,700 at the Forum which snapped Charlottetown’s 39 game unbeaten streak on home ice.  Jacques Richard scored three times in the final contest which began as another rough affair but calmed down as the Islanders had to play catch up on the verge of elimination. There were 22 penalties in the game, a hard hitting affair. Quebec built up a 3-2 lead and scored twice in the final period, outshooting the Islanders, 44-38.  The Remparts would move on to the  Memorial Cup eastern final but would three straight to the Montreal Jr. Canadiens who had Richard Martin, Gil Perreault, Ian Turnbull and Jocelyn Gouvremont in their line-up. Montreal won the Memorial Cup  sweeping  the Weyburn Red Wings of Saskatchewan, four straight.

One of the Remparts players, Michel Briere, a top draft pick of the Pittsburgh Penguins died in a tragic car accident before making his pro debut.

The Island media covered the eastern semi-finals with Loman MacAulay calling the games on CFCY Radio.  Bill Ledwell and Lauchie Chisholm wrote newspaper stories on the epic series for The Guardian and The Patriot newspapers.  The Islanders got another shot the following season at the newly launched Centennial Cup.

Charlottetown was minus Hilliard Graves, Bobby MacMillan and Ray Gibbs as the new season began but had the nucleus of the Atlantic championship team back including Al MacAdam, Tim and Tom Steeves and Angus Beck. Newcomers were Peter Williams, Max Roy and goalies Steve Van Diest and Alan Hume.

The Islanders would compete in the first Centennial Cup Jr. post season winning the East quarter-final in a four game sweep of the Moncton Hawks.  Jack Hynes troops then won the East semi-final, 4-1 over the Thunder Bay Marrs.   The Islanders then faced the Detroit Junior Red Wings, the Southern Ontario Jr. A champs, with a line-up that included Mark and Marty Howe, Gordie’s kids. The Islanders won the East final 4-2 in a six game series and the Dudley Hewitt Cup.

Gordie Howe to the Rescue

An interesting footnote out of that series that involved Mr. Hockey.   Goops Wooldridge who was the trainer for the Islanders recalls some of the defensemen on the Islanders were not happy with how their skates were sharpened by the Detroit equipment staff as the series switched to the Motor City. Goops says they called the Jr.  Red Wings office and asked for someone to come down and do a better job.  The Wings  were owned by Gordie's wife Colleen who answered the request.  "She summoned Gordie and he came down and re-sharpened the skates."

Gordie apparently sharpened his own skates to get the blades the feel he wanted,

The Islanders players were both amazed and thankful for #9's help,

Charlottetown advanced to the national final in the Centennial Cup but lost the series, 4-2 to the West champion Red Deer Rustlers.   Red Deer won the opener,6-3 with Al MacAdam scoring all three Islanders goals. The Rustlers scored three in a row to take the game, just the second loss in 23 playoff games for the Atlantic champs. Charlottetown GM Boyd White says they were simply out hustled and out checked by the Western champs at the Forum. The second game was even more decisive as Red Deer won, 7-3. Bobby MacGuigan, Angus Beck and Alex Dampier scored for the Islanders.  The Rustlers scored four straight goals after leading, 2-1. Game 3 saw the Islanders prevail, 6-4 after trailing 3-2. Kevin Devine scored twice, MacAdam,Peter Williams,  D'Arcy Murphy and Angus Beck also connected. Murphy with the game winner. Tim Steeves battled Mickey Unger of the Rustlers in the main event with Steeves the clear winner.

Red Deer took a 3-1 series lead with another win in Game 4 as the Islanders led 3-1 but allowed the Rustlers to score three times in 45 seconds in the second period. The Islanders bounced back with a 7-2 effort in Game 5 as Murphy and Don Jones scored twice each. as they fired 43 shots and had five breakaways on Red Deer goalie Dale Henwood.  He was pulled and replaced by future NHL goalie John Davidson with the score 6-2.  The Rustlers capped the series in Game 6 despite being outshot, 43-25 by the Islanders. Henwood was a standout in the contest as Brian Ogilvie scored the winner in the third period.

The Junior Islanders franchise would fold in the  early 70's with  many of the players turning pro.  It would be another eight years before another Island team would get as far.

Charlottetown did defeat the Moncton Beavers in 1971-72 but lost to Guelph in the Eastern finals, 4-0.The Guelph CMC's then swept Red Deer in four straight games to the win the Centennial Cup. Guelph CMC's forward Paul Fendley died days after game four of the championship series after hitting his head on the ice during game four. He was the CMC's leading scorer.

The Quebec Remparts lost the Eastern final to Montreal in the spring of 1970 but won the Memorial Cup, 2-0 over the Edmonton Oil Kings in 1971 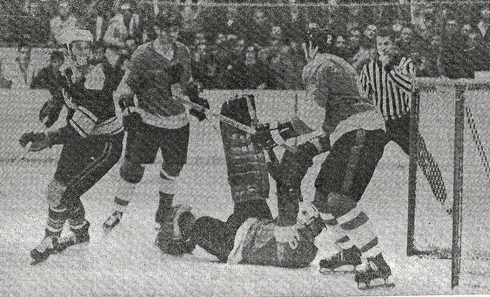 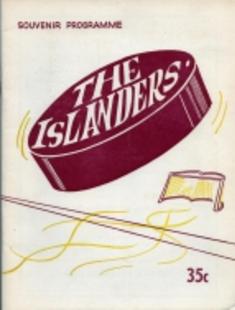