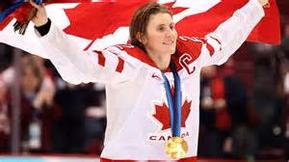 Canada’s smallest province did not win a medal in Quebec City in the very first Canada Games but proved very competitive in many events including  hockey.  PEI sent a contingent of 156 partcipant to the Games headed by Dr. David Boswell, the first Chef-de-Mission. The hockey team was made up of university players. The Island was represented by the St. Dunstan’s Saints who had a formidable team in the AUAA conference.  Injuries played a key role for PEI in the opening games of the competition. Joe Cheverie and Wayne MacDougall were both hurt as Quebec beat PEI, 6-4. Cheverie was put out with a neck injury while MacDougall went down with a shoulder injury as he chased the puck on an icing call. Manitoba got by the Island squad, 6-4 with Mike Kelly scoring twice for the Saints with singles to Vince Mulligan and Paul MacWilliams.  PEI did blank the Yukon, 8-0.  The University of Alberta Golden Bears won the gold medal game over British Columbia, 4-1 while Ontario took the bronze.

Prince Edward Island has had fourth and fifth place finishes in Canada Games men’s hockey.  Perhaps the most disappointing was sixth place in 1991 in the Winter Games hosted  in Charlottetown. Several NHL stars emerged from that tournament including Paul Kariya of Team B.C. and Chris Pronger of Ontario. Pronger played on the gold medal wining Ontario squad and had 4 goals and 4 assists in seven games.  Kariya played on a disappointing B.C. team that finished tenth.  Kariya had 4 goals and 9 points in five games. The Jack Hynes coached Islanders included a few pro stars of the future as well. Among the players—Jason MacDonald, David Ling, Brodie Coffin, Todd MacDonald, Stu Dunn, Billy McGuigan and Marcel Pineau. PEI played in rough and tough but penalties hurt and the team was out of the medal hunt. PEI defeated British Columbia, 4-2 but consecutive losses to Quebec and Saskatchewan pushed the team into sixth place.  The Saskatchewan loss was particularly ugly as a wild third period brawl resulted in ten players being ejected.  PEI’s Jason MacDonald created some controversy as he shadowed Alexandre Daigle on Team Quebec. Daigle was a marked man as he came into the Games touted as a future super star. Daigle was the first choice of the Ottawa Senators in the 1993 NHL entry draft but never lived up to the hype. He played in 616 NHL games and scored 129 goals and had 186 points in stops in Ottawa, Philadelphia, Tampa Bay, New York (with the Rangers), Pittsburgh and Minnesota (with the Wild where he finished his NHL career in 2006).  He spent his final four years playing in Europe. Daigle did appear in training camp in Charlottetown with the Senators in 1994.  MacDonald was drafted in the sixth round in 1992 by Detroit and played in four NHL games with the New York Rangers in 2003-04.  Most of his career was spent in the AHL in Adirondack, Wilkes-Barre/Scranton as single seasons with the Fredericton Canadiens and Saint John Flames.

Another emerging star played in the female hockey division. Hayley Wickenheiser would become a dominant star with the women’s national team and had 3 goals, 3 assists and 6 points in six games. She also scored the gold medal winning goal not even a teenager yet. Wickenheiser was just 12 years old on Team Alberta. Another upcoming women's hockey star, Cassie Campbell played for Team Ontario. Campbell with a number of relatives cheering on from the Kensington, PEI area.

No Cameron, No Medal

The 1979 Island men’s hockey team coached by Everett Stewart was fourth overall.  The Canada Winter Games were hosted by Brandon.  Wayne MacDougall, manager of the team, had played in the first two sets of Canada Games in Quebec City and Halifax.   The ’79 team was made up of some outstanding junior aged players and a few college stars including soon to be NHL pro David Cameron. Unfortunately, Cameron suffered an injury that kept him out of the Games. He might have been the difference, if healthy.  PEI lost to Ontario, 4-3 in the bronze medal contest.  Injuries during the tournament to forwards Shane Turner and Harold Hay also meant more pressure on the bench players. Coach Stewart was impressed with how his troops managed to overcome disparity and pushed themselves to the medal round. He particularily pleased with the play of Derek Cook, Gordie Campbell, Jeff Bell and Billy Clements and defenseman Paul Strang.  “He was one of my best defensemen in the end.” Stewart proclaimed.

Fifth Place On the Rock

The men’s hockey team was fifth in 1999 in Corner Brook, Newfoundland-Labrador.  Ron Hennessey was head coach of the Island team that included future pro goaltender Drew MacIntyre plus other stars like Thatcher Bell, Clement Arsenault, and Cory Roberts. Bell was the flag bearer for Team PEI in the opening  ceremonies and just a year later he was a member of the 1999-2000 Rimouski Oceanic Memorial Cup champions.

2009  marked a big year on Prince Edward Island as the province hosted the Canada Summer Games. The Host Society set a lofty goal to attract 6,000 volunteers.

You don’t have to look any further than to George Trainor for the definition of volunteer.  Trainor served as manager for the 1991 and 1995 Canada Winter Games men’s hockey team. He brought with him a lifetime of knowledge in the game of hockey as a junior and university  player.  Later, George became general manager of the Sherwood-Parkdale Metros, a team that was  built into a Centennial Cup contender in the late 1970’s. The Metros won the Island Jr. “A” and Maritime and Eastern Canadian titles in 1979 and 1980. George was GM of the 1979-80  team. Both Metro teams made it to the Centennial Cup finals in both years.

Perhaps George Trainor’s biggest challenge was to assemble a men’s hockey team for the 1991 Canada Winter Games. He was chosen as manager of the team in 1988.  Former Junior Islanders coach Jack Hynes was named head coach and Mike Ready as his assistant.  The next task was forming the team, knowing full well that it would a major focus of the Games as the host team and many pro and amateur scouts would be on hand. Mike Ready says the ’91 PEI Canada Games team was virtually a who’s who of Island hockey. Future pros included David Ling, Jason MacDonald, Billy McGuigan and goalie Todd MacDonald.   Other stars included  goalie Stu Dunn plus forwards Marcel Pineau and Steve Vos.

George and the coaching the staff put in many  days and months before finalizing their roster.  The 1991 Canada Games hockey tournament would be won by Ontario and featured NHL stars like Paul Kariya, Chris Pronger, Mike Peca and Alexandre Daigle.
PEI’s greatest moment was doubling Kariya and Team B.C., 4-2 before 15-hundred fans in the Tignish Centennial Arena to improve the Island to a 2-1 record and a first place standing early in the tourney. B.C. protested the game based on penalties assessed to Jason MacDonald. David Ling scored twice.  PEI finished sixth overall and just missed the medal round.  Manager George Trainor was extremely proud of the way his team played saying they never put their heads down and alwaysworked hard no matter what the score.

Every hockey game featuring Team PEI was a sellout across the Island during the ’91 Games.  Hundreds of fans had to be turned away from the new Civic Centre in Charlottetown as PEI played Quebec. A capacity crowd of over 3,200 took in the contest won by Quebec, 13-5. The sixth place finish was the best for PEI since taking fourth place in the 1979 Games.

George Trainor also managed the 1995 PEI men’s hockey team in Grande Prairie, Alberta.  He later would serve as an executive member including President of the PEI Hockey Association and as a Charlottetown City Councillor. His love of hockey started as an outstanding amateur, then university star and later as a general manager, manager and executive.  George Trainor certainly left his mark on Prince Edward Island hockey.  He gave back as much as he received from the game as a volunteer and a lot more. His passing came very suddenly and brought much sadness to the hockey community.

The George Trainor Holiday Classic hosted by the minor hockey associations in Charlottetown and Sherwood is an annual tribute to the man and the game. 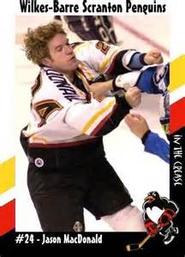 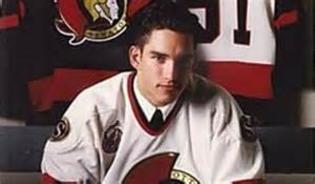 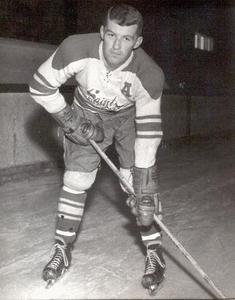 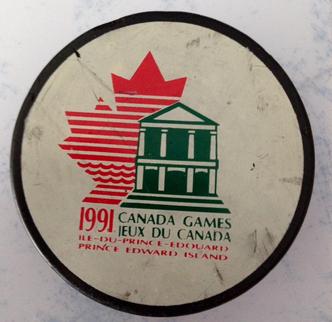 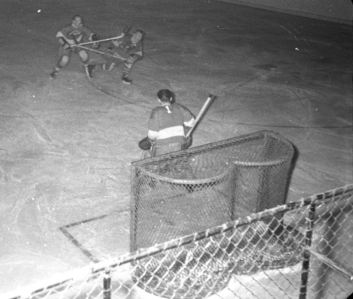 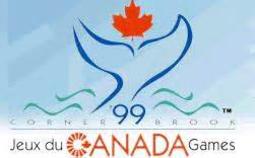