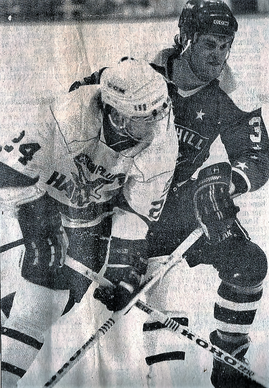 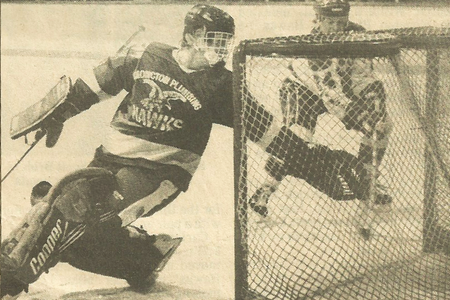 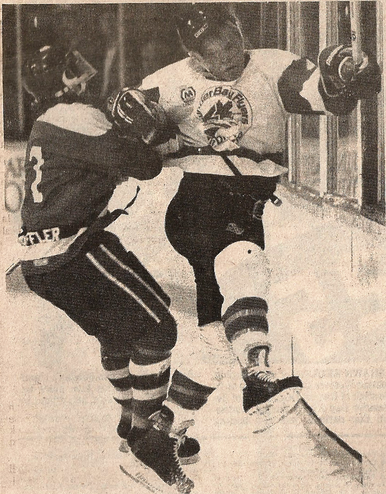 Caps Ken Murchison scores on Moncton goalie Darin Baker as Summerside wins the Atlantic Championship, 8-5 in the 5th game of the finals 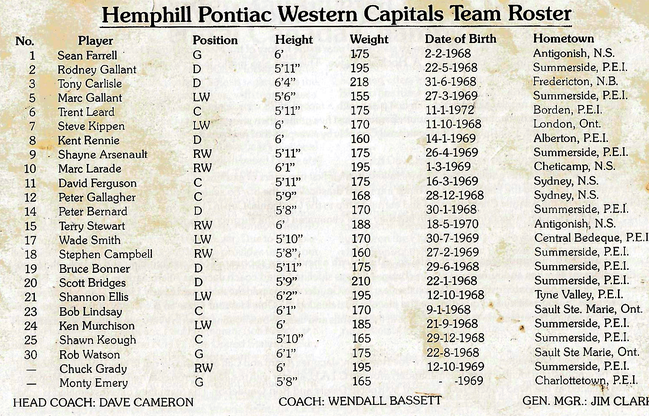 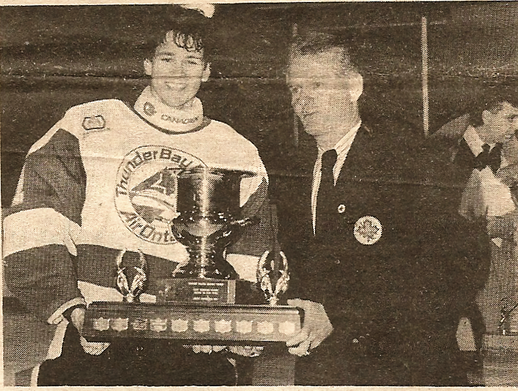 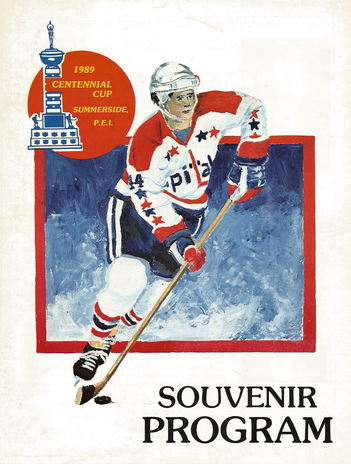 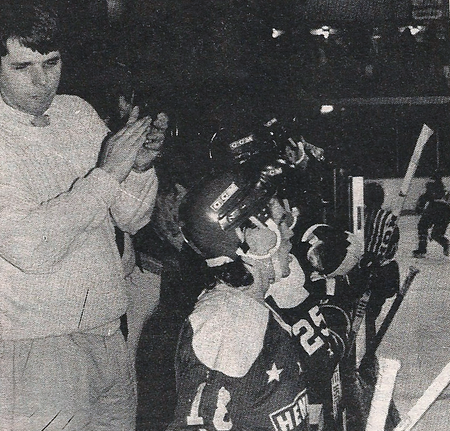 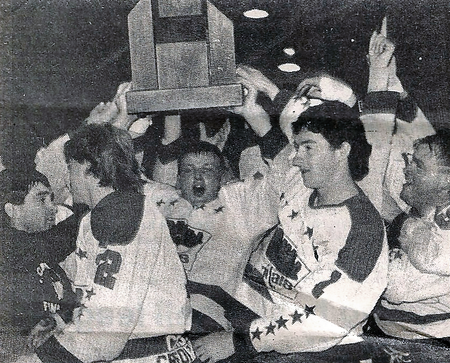 It took the Summerside Western Capitals just three seasons to capture their first Island Junior Hockey Championship after entering the league in the 1981-82 season, replacing the Crystals franchise that folded after the 1979-80 season. The idea of replacing the Crystals actually was the brainchild of an Island hockey fan who came back home from the western Canada and missed the local game during the winter of 1980-81.

Businessman Rick Ozon, who had just moved back from Calgary, detailed his plans for the rejuvenation of junior hockey in Summerside in a meeting on board the ferry the M.V. Abegweit in November, 1980 that led to the birth of the new team.  Ozon, travelling back from Halifax,  and  former Island Jr. “A” League president Clair Sudbury discussed the idea on a trip across Northumberland Strait.  The creation of the new franchise happened quickly. In January, 1981 a news conference was held at the Brothers Two Restaurant to where Prince County Sports Inc. was announced going to ice a new junior hockey team in the city. Bryan Chappell was named President, Bloyce MacLellan was Vice-President and Ozon the Secretary-Treasurer.  Sudsbury would be an advisor. Other executive members were also named. The team also went public and gained 70 shareholders from around Prince County at $100 a share. Some team promotions followed including an equipment fund that was sponsored through McDonald’s and Shoppers Drug Mart.

Summerside is known as Prince Edward Island’s “western capital” being the hub of Prince County.  A name the team contest was held and the winning entry was the “Western Capitals”.  The first ever junior team in Summerside was the Capitals in 1936-37 so the nickname was a natural.  The Caps adopted the same uniform colours and similar logo as the Washington Capitals (red, white and blue) as the franchise began.  The first home game was on October 18, 1981. The Capitals  played in old Cahill Stadium until the Eastlink Arena in the new Credit Union Place opened in March, 2007.

Doug MacLean was the Caps first head coach and guided them to Island Junior crown in 1983-84 with players like Darrell Ashley, Gordie Montgomery, Charlie Cameron (captain) and goalie Alan Andrews.  MacLean, the former UPEI Panther, would use the Capitals as his stepping stone toward a successful career as a coach, general manager and executive in the NHL.  MacLean played major junior with the Montreal Jr. Canadiens in the OHA in 1971-72 and the Montreal Red White and Blue in 1972-73 prior to joining UPEI. Following one year as head coach with the University of New Brunswick, MacLean was named an assistant coach with the St. Louis Blues in 1987-88 and later moved on to Washington, Detroit, and Florida (where he guided the 1995-96 Panthers to the Stanley Cup finals). His next stop was the expansion Columbus Blue Jackets, where he got behind the bench for two campaigns in 2002-03 and 2003-04. MacLean as also served as general manager and president.  Jim Clark, who worked with MacLean as general manager with the Summerside Caps, was rewarded for his loyalty by working with him in Columbus.

With MacLean’s departure, the Western Capitals turned to former NHL player Dave Cameron, from Kinkora, to guide the team. He too would go on to become an NHL head coach with the Ottawa Senators.   You are beginning to see a pattern here.  In the 90’s Gerard Gallant took over as head coach and guided the team to the Royal Bank Cup in 1997 and went to his own NHL coaching career which followed some outstanding years as a player with the Detroit Red Wings. The Caps had two other coaches for one season each during the early years – Clark and another former National League star, Errol Thompson.  Other familiar faces on the Capitals were trainer Kenny Simmons and his famous red sweater, team president Bloyce MacLellan and vice-president, John Brown,.

Between 1983-84 and 1988-89, the Caps won four Island championships, bowing to the Halifax Lions in five games in their first try to the Atlantic playoffs, the second time around they fell in five games to the Moncton Hawks, and in 1987-88, a tough seven game loss to Halifax. During the six year run, the Capitals finished first three times (1984-88-89), second twice (1985-86), and third (1987) in the Island Junior League standings.

In 1989, Summerside would have its most successful season rounding out the decade of the 1980’s, coming within a game winning of the Centennial Cup.

The last year of the 1980’s was not a good one in Summerside with the imminent closing of the Royal Canadian Canadian Air Force Base in the city’s north end in Slemon Park.  Hundreds of jobs were being lost as the City faced a huge crisis.   Hockey gave people who lived in Summerside and surrounding areas an outlet.

The Capitals provided their fans with something to cheer about and in a big way in 1988-89.

Summerside finished in first place in the Island Junior League standings with 33 wins, 7 losses and 4 ties in 44 games, scoring 297 goals and allowing just 161 against. Rodney MacArthur of the Charlottetown Best Seller Abbies won the league scoring race with 55 goals and 97 points. MacArthur, a 20 year old, was the league MVP and a first team all-star. Shayne Arsneault led the Caps with 28 goals, 33 assists for 61 points and just a point up on David Ferguson who had 28 goals and 32 assists. Trent Leard, Steve Kippen and Ken Murchison each had over 50 points.  Murchison’s mother, Judy was team President.  Rob Watson and Sean Farrell combined for a 3.67 goals against average and were the top goaltending tandem in the loop that also included Sherwood-Parkdale, Montague and Saint John.   Hemphill Pontiac, Buick, GMC was the major sponsor of the team for many years along with other community minded businesses.  Together with their business sponsors and volunteers, the Capitals lured the first of three Centennial Cup/Royal Bank Cup tournaments to Summerside in 1989.

Dave Cameron had Wendell Bassett and Grant Sonier (former Caps player and future Charlottetown Islanders GM) at his side as assistant coaches.  Cameron worked well with the players as a good teaching coach.  He told his troops to always respect their opponent and to show that when they were interviewed by the media. Cameron would have the players form a semi-circle at centre ice when he was addressing them during practice. That way he could see each individual player and know they were listening.

Summerside swept the semi-finals and the league finals in four games over the Abbies.  They went on to beat the Moncton Hawks in five games in the Atlantic finals to claim their first Callaghan Cup Atlantic championship.  The Western Capitals and the Hawks both made it the Centennial Cup tournament along with the Vernon Lakes of British Columbia and the Thunder Bay Flyers from Ontario.  The tourney began on Friday, May 5th.

The 1989 Centennial Cup tournament arrived in Summerside on Saturday, May 6th as the Central champion Thunder Bay Flyers ran away with an 8-2 victory facing the West champs, the Vernon Lakers, 8-2. Greg Hankkio, a left winger, scored the winner early in the second period as the Flyers built up 5-0 lead before the B.C. team got a goal.

The next day on a Sunday, the hosts and Atlantic champion Western Capitals managed to hold off Thunder Bay, 5-4.  Peter Gallagher scored the game winner at 10.40 in the second period, which made the score, 5-2. Thunder Bay made a game of it scoring midway through the second and another goal halfway through the final period. Garry Wenzel had two of the Thunder Bay goals. The Atlantic reps, the Moncton Hawks dropped Vernon, 5-2 in the night game. Tom Gemmell led Moncton with two goals.

Moncton got a little revenge doubling Summerside, 6-3 in a Monday game. Centre Martin Lacroix scored twice and set up the fifth Hawks score.  But three games in three games in just as many nights was too much for the weary Hawks, 6-2 at the hands of Thunder Bay in a Tuesday game.  Wenzel had a goal and assist in the fifth game of the tournament. Gallagher had two goals for the Caps who led briefly, 2-0.The Western Capitals handed the Vernon Lakers their third straight loss in a must win situation on Wednesday, May 10th but it took two overtime periods. The Caps won the game 5-4. Ken Murchison got Summerside rolling with a power play goal late in the first period. Shayne Arsenault had a big night with a goal and assist. The Lakers tied the game, 2-2 but David Ferguson put the Caps ahead to stay with eight minutes left in the second period.

Thunder Bay got a bye to the final game with a better goals for and against record in the round robin, even though the Flyers tied Moncton and Summerside with a 2-1 record. Vernon went 0-3.

There was no time for the Capitals to enjoy their double overtime victory over Vernon.  The stage was set for the semi-final game the Centennial Cup tournament on Thursday, May 11th. Summerside would meet Moncton for a seventh time in the post season.  This one would be an epic battle that saw three overtime periods, a tournament record.  The Hawks came out flying scoring twice on five shots on Caps goalie Rob Watson who was replaced halfway through the period by Sean Farrell. Moncton led 2-1 after one. Murchison scored the first Summerside goal. Farrell named the game’s first star, made 18 straight saves including 15 in the scoreless second period.  Right wing Terry Stewart of the Caps tapped in his own rebound to  tie the score, 2-2 at 11.06 of the third as he beat Moncton goalie Darin Baker. The goalies were the difference through a 10-minute overtime and two more 20- minute overtime periods. Farrell made 17 saves in 45 minutes of overtime.

Bob Lindsay’s power play goal at 14.51 of the third overtime decided the contest. The winner was assisted on by Murchison and game after Moncton’s Martin Lacroix was given a five minute major for cross checking the Caps Shawn Keough into the boards.

The Caps came back and won the contest, 3-2 much to the delight of their weary fans.

On Saturday, May 13th, the Western Capitals became only the third Island team to reach a Centennial Cup final.  The Caps had the day off Friday but were to face a Thunder Bay team that had not played since Tuesday and was well rested.

Cahill Stadium was packed with 2,008 fans on hand for the night game to decide the Canadian Jr. “A” championship.  Summerside had already defeated Thunder Bay earlier in the tournament but it was expected to be a tight finale.

The Flyers were led by centre Greg Johnson, who led the round robin with 3 goals, 6 assists and 9 points. Johnson would attend the University of North Dakota the following season and later would play for Canada’s National Team in 1993 and 1994. Johnson would go to a fine NHL career including seven years with Nashville after stops in Detroit, Pittsburgh and Chicago. He had 145 goals and 309 points in 785 NHL games.

The Flyers led 1-0 on a goal by right wing Bruce Ramsay at 7.14 in  the first. Greg Hankkio scored twice and Todd Howarth rounded out the scoring as Thunder Bay outshot Summerside, 44-20 including 23 shots in the final period. Tony Carlisle had the lone Summerside goal as he beat Todd Henderson in the Flyers net with about four minutes left.

Thunder Bay won the Centennial Cup, 4-1 over a very tired Summerside Western Capitals squad.  Henderson was name the MVP of the tournament with a pair of wins and 3.00 goals against average.  Murchison of the Caps made tourney All-star team as a forward and Rodney Gallant on defense.

Summerside would go on to host two more national junior tournaments and make the final game in both of those championships.  A better outcome would follow in 1997. 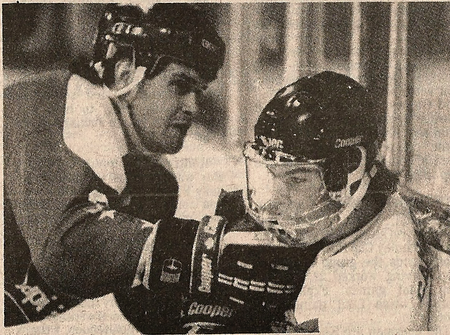 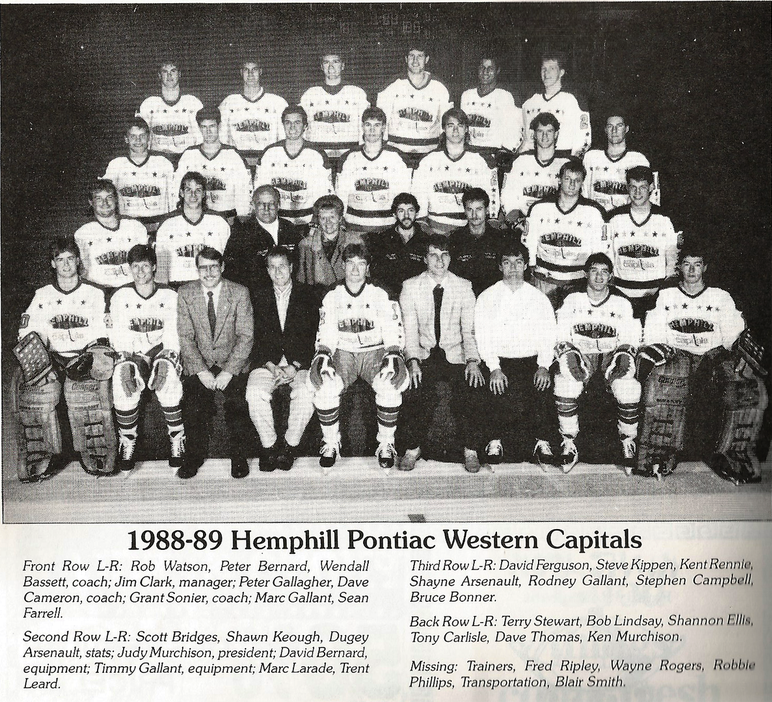