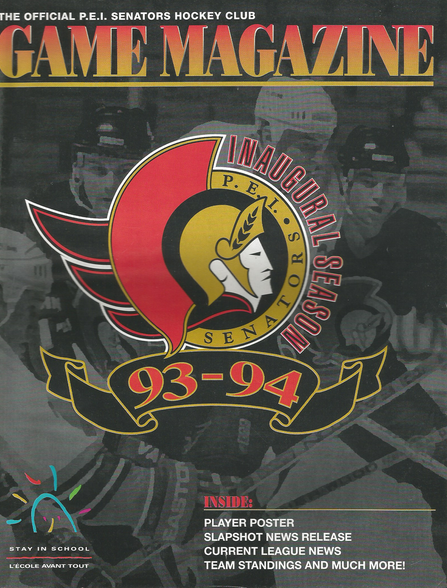 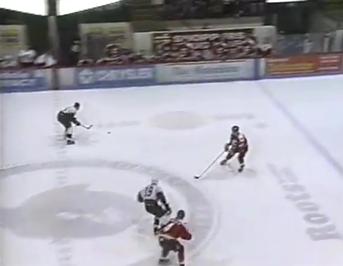 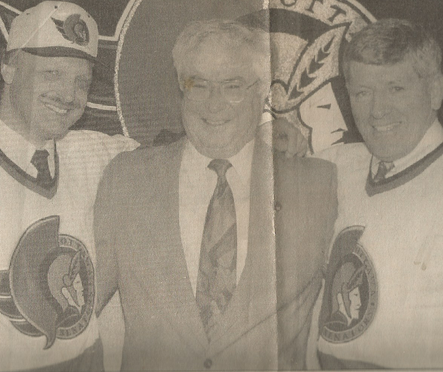 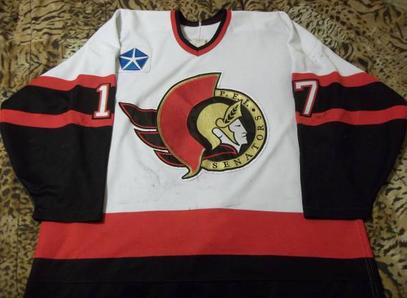 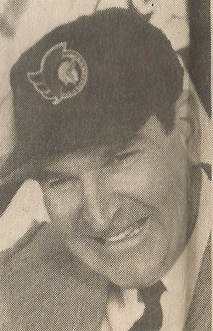 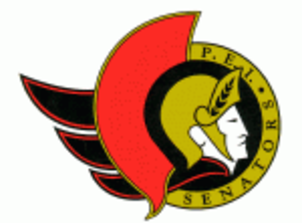 Senators action at the Civic Centre

Island fans supported the PEI Senators for three seasons with good attendance most nights - but not the 3,000 average Ottawa desired 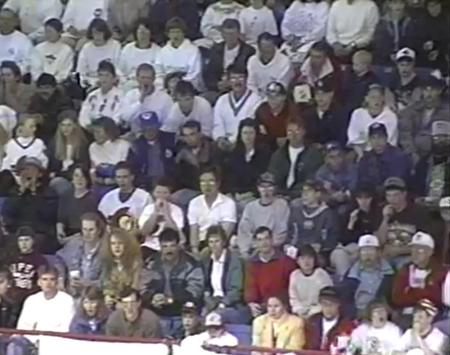 ​The PEI Senators professional hockey franchise was born with a simple press release on Thursday, April 15, 1993 to announce the NHL expansion club was moving its American Hockey League affiliate to the Charlottetown Civic Centre for the 1993-94 season. The team would last three seasons in Charlottetown before disbanding but the Island was about to get its first taste of pro hockey since the early 1950’s.

Ottawa Senators President Randy Sexton announced a deal had been reached in principal to enter a five year agreement with the PEI Senators Hockey Club, Inc. pending approval by the American Hockey League Board of Governors and legal documentation. League approval  came in June. Ottawa had purchased the AHL club outright from U.S. businessman Peter Shipment in February and speculation began immediately on the relocation.

There was a distinct Island flavour behind the bench as Don MacAdam of Morell retained the same job in he had in New Haven, Connecticut, as head coach and Shamrock, PEI native Mike Kelly as his assistant coach. MacAdam was also named Assistant General Manager. The next job was to undergo an ambitious season ticket sale plus renovations to seating at the three-year old Civic Centre and upgrade it to AHL standards. It was expected to be an easy sell – reaching to Islanders from Tignish to Souris. The parent club had a target set of 3,000 season ticket sales. The season ticket drive began with over 535 fans putting down a $50 deposit on their season tickets in just a 48 hour period. Focus Marketing acted as interim business managers for the club which hired CPHI to conduct a marketing strategy. By March 12th with 1,000 season tickets were sold. The asking price was $518 per season ticket. Speculation on the Senators moving their top farm club to Charlottetown began on February 5th at the NHL All-Star Game in Montreal.  Ottawa’s Director of Player Personnel, former Canadien and NHL star John Ferguson leaked the word during meetings at the All-Star Game on condition he would not be identified. Ferguson came down to PEI in March and took a two-day tour of the province promoting ticket sales. A fierce snow storm didn’t slow down the ticket sale caravan travelled across the Island to Summerside and other locales. Ferguson was greeted by fans everywhere. Another 200 season tickets were sold. Team President Moore was concerned the lofty goal of 3,000 season tickets would not be achieved. Rod Bryden, CEO for the Ottawa Senators softened the stand and stated if the club was reasonably sure 3,000 tickets could be sold for each game, the team would be in Charlottetown.

Charlottetown Mayor Ian “Tex” MacDonald was elated with the news that a prime tenant had been found for the City run Civic Centre.  He said, “This is a red-letter day”. The Mayor could hardly believe the news.  He also stressed bringing the AHL to Charlottetown would be a province-wide effort (thus the PEI Senators nickname). The Senators would join other Atlantic cities in the AHL including Moncton, Saint John, Fredericton, Sydney and St. John’s.

There was already a word of caution about Ottawa moving its farm club to Charlottetown on the same day the move to PEI was announced.

Brian MacKenna, Ottawa’s Director of Hockey Operations, commented, “There is a feeling from other AHL teams that, within the next decade, you’ll need arenas in the 4,000 to 5,000 or 6,000 range to be able to be competitive.”  The Charlottetown Civic Centre capacity was 3,700.

​The Philadelphia Flyers held their first week of training camp for the 1992-93 NHL season in O’Leary in the western end of PEI.  There would be practice and scrimmages at the new O’Leary Recreation Centre and plenty of activities like golf for the players and management at Mill River and an intra-squad game at the Charlottetown Civic Centre.  It was the first NHL camp for rookie phenom Eric Lindros. Islanders from all over came up to see the Flyers and more so to get a glimpse of Lindros. They also got a taste for pro hockey.

The pursuit of an American Hockey League franchise actually predated the Flyers camp. Dr. Ian Moore would take in a few AHL games during the the winter in Moncton. He ran the idea of adding an Island team to the Atlantic Division to former coach Jack Hynes, the General Manager of the Charlottetown Driving Park in 1989.  Hynes said Shane Turner, a former top amateur and minor pro player in the New York Islanders organization and Mike O’Brien, a chartered accountant and one time star player with the St. Dunstan’s Saints were interested, especially with a new arena being built in Charlottetown for the 1991 Canada Games. The first serious attempt to land a franchise came a few months later with the Montreal Canadiens looking to move their Sherbrooke AHL franchise. The Island group also spoke to the Hartford Whalers and New York Islanders. Charlottetown City Council weighed the options but did not support a move to bring pro hockey to the Island capital. It should be noted that the council was embroiled in an often heated discussion over where the new arena to replace the aging Charlottetown Forum would be built which was more of a priority at the time.   Dr. Moore said the fact finding mission led to some positive findings on what went wrong. “We were even more stimulated to go after a team.”

Ian Moore was persistent. He and the Island pro hockey group discussed a move of the Toronto Maple Leafs AHL farm club from Newmarket, Ontario to Charlottetown.  Floyd Smith, General Manager of the Leafs and Bob Stellick, Director of Operations paid two trips to PEI in January and April, 1991.  St. John’s, N-L also showed interest and landed the franchise on May 3rd, 1991.

“St. John’s had great support from their mayor and our City fathers didn’t seem to have the same enthusiasm we lost the bid,” said Moore, who also listened to the Boston Bruins Ed Anderson, who had a keen interest in moving the team’s Maine Mariners franchise to Charlottetown. “He was serious and came to Charlottetown about 6-8 times in March and May in ’91 and was very interested in having their AHL farm club come here”.  Unfortunately the plan fell through when Portland caught word of the deal and the backlash led to Boston rethinking the PEI move.  Also, a visit by the Bruins GM Harry Sinden and Coach Mike Milbury to Charlottetown was a pretty quiet affair and dampened the Bruins pursuit.  A preliminary lease agreement was even on the table. Eventually, Boston moved the franchise to Providence, Rhode Island.

But this is hockey not baseball.

The Ottawa Senators were looking for a new home for their own farm club and had interest in both Charlottetown and St. John’s.  With the Leafs moving to their farm club to Newfoundland and Boston opting out any deal with Charlottetown, Ottawa decided to step in.  John  Graham, an agent for the Senators met with Dr. Moore. The asking price for an expansion in the American League was $1 million. That proved to be too much for the Island pro hockey group and the Senators went to New Haven.

A new city council was elected in November, 1992 and Tex MacDonald, a solid supporter of bringing pro hockey to Charlottetown, was elected mayor.  MacDonald was an excellent athlete himself (former softball  star and football coach) and it was no secret pro hockey was on his agenda. As luck would have it the Senators were having trouble with their New Haven farm club and Mayor MacDonald contacted John Bryden of the Ottawa ownership group. The talks picked up again with Bryden doing a lot of work to set financial projections. The puck was bouncing the way of Dr. Moore and his Island partners.

And another lucky break occurred when St. John’s municipal workers went on strike which meant no maintenance work would be done in the Baby Leafs home Mile One Arena. The Leafs had to play their “home” games in other arenas for the last three months of the 1992-93 season. Three of those games were arranged for the Charlottetown Civic Centre in March they played to sell-out crowds of over 3,000.  One of those games was played on Thursday, March 18, 1993 with the Hamilton Canucks visiting the St. John’s Maple Leafs. Island raised star Rick Vaive in the twilight of his career, played his first and only pro game on PEI for the Canucks wearing his familiar #22. The Leafs added Charlottetown’s Todd McCabe on an amateur tryout (ATO) and had a line-up that included future NHL star Yanic Perreault and Coach Marc Crawford with his assistant on the bench, Joel Quenneville. Al Craig, a former CFCY sports director and play-by-play voice (1975-78) provided another Island twist to the story as he travelled with the Canucks to Charlottetown. Earlier, the Moncton Hawks played back-to-back games in the Civic Centre before crowds of 3,294 and 3,194.  Both contests were Leaf wins by scores of 4-3 and 5-1.

Meantime, the New Haven Senators were dead last in the AHL standings and were averaging just over 1,800 fans a game.   Ottawa was quick in deciding to move the team providing 3,000 season tickets could be sold on the Island. A few months later the PEI Senators were born.

The happiest man had to be Doc Moore.  “It’s nice to have professional hockey come to PEI, “he said. “We are going to see a lot of great hockey players”.  Kudos to the popular veterinarian and horseman for his nearly five year relentless pursuit of landing a pro team for the Island.

A new day was unfolding in PEI’s hockey history. League approval came followed by a formal announcement in the way of a press release, receception and party on June 17, 1993  entitled “Senators Celebrate P.E.I.” and the introduction of the Ottawa brass, the coaching staff, defenseman Kent Paynter, centre Jake Grimes and Ottawa’s 2nd round pick in 1992, left winger Chad Penney at the Civic Centre.

John Ferguson, down from Ottawa for the announcement, stated “The PEI Senators will be a young, aggressive team. We wanted our AHL affiliate to be in Canada and PEI offers the great kind of lifestyle we wanted our prospects to develop. I am confident the people of the Island will be proud of their Senators.”

For the next three years Prince Edward Island was on the professional ice hockey map. 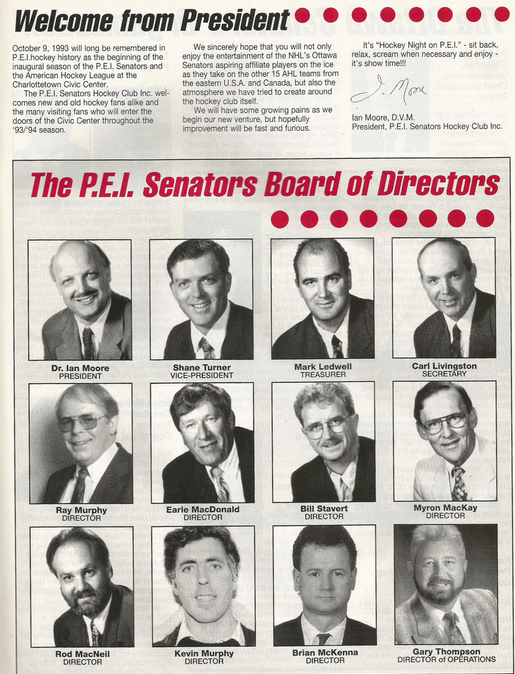