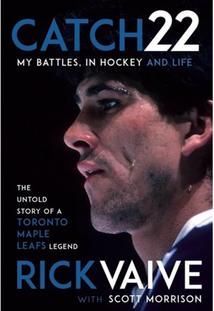 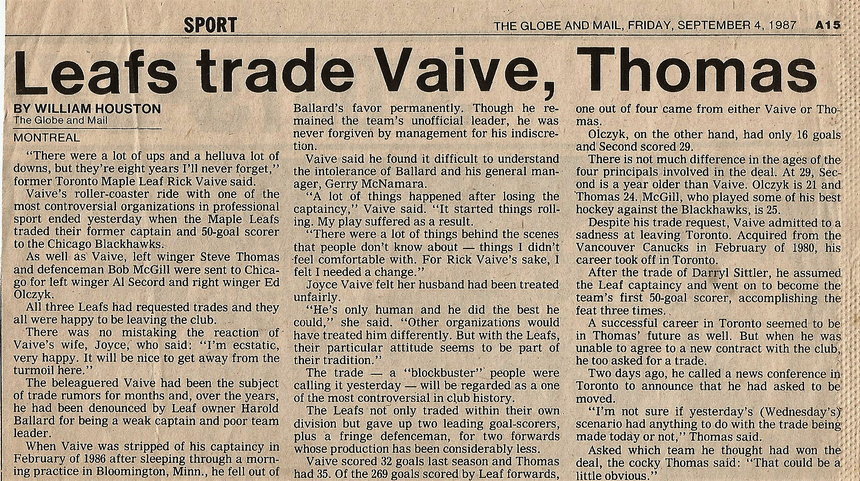 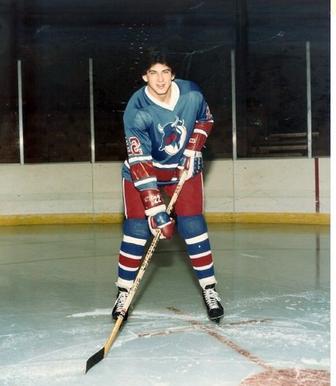 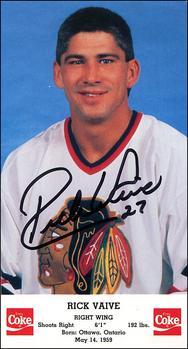 For more on Rick Vaive's first 50 goal season with the Leafs go to:

Rick Vaive, born in Ottawa, spent some time in Amherst, Nova Scotia and became a solid hockey prospect in his teen years in Charlottetown, PEI. He became one of the biggest names in hockey in early 1980's in the biggest market in the country. That was after moving with his family to the Maritimes at age 11 in 1970.
By his early 20’s Vaive was a member of the Toronto Maple Leafs and their first 50 goal scorer.

His junior career took off in the mid 1970's, first with the PEI champion Charlottetown Charlottetown Generals where he scored 42 goals and had 79 points in just 34 games in 1975-76 and helped the team in the Centennial Cup playoff run. Two of his brothers also played for the Charlottetown Juniors in later years (Stevie and Ron Vaive). His parents, Claude and Mary were very involved in minor hockey for years in Charlottetown.
The next season he was with the Sherbrooke Beavers in Quebec Major Junior where he grew a reputation of being a goal scorer, a game breaker and a guy with some toughness.
Vaive was name Quebec Major Junior Rookie of the Year in 1976-77, scoring 51 goals and had 110 points in 68 games.
A year after that it was 76 goals and 155 points, again in 68 games.

He played for Canada in the World Junior Hockey Championship in 1978 (one of his line mates was Wayne Gretzky) and later won a bronze with Canada in the World Championship in 1982 and a silver in 1985.
Vaive was rated as the No. 13 prospect for the NHL draft in 1979 but he chose to sign with the Birmingham Bulls of the World Hockey Association as an underage free agent, signing in July, 1978.
As a member of the Baby Bulls Vaive played on a line that included Michel Goulet where he scored 26 goals and 59 points in 75 games and led the league with 248 minutes in penalties.  He was one of six underage players on the team.  One of his team mates was Team Canada ’72 hero Paul Henderson.

When the WHA was absorbed by the NHL, Vaive was selected by the Vancouver Canucks as the 5th overall choice in the 1979 entry draft.

The right handed shooting winger scored 13 goals in 47 games with the Canucks in 1979-80 before going in a blockbuster trade to Toronto in February, 1980. Vaive and Bill Derlago were dealt to Toronto on February 18 for Tiger Williams and Jerry Butler. Derlago became his closest friend and was even the best man at his wedding as he married Joyce Stewart (sister of NHL player Bob Stewart).

Injuries played a part in Rick Vaive not playing in a full season during his Leaf years that lasted until a trade in 1987-88 to the Chicago Blackhawks.  He missed part of the ‘83-84 season with an ankle injury then a hand and wrist injury the following season.He played in three all-star games in 1982, 83 and 84 and tied an NHL record with 3 assists in the ‘84 All-Star Game.

Vaive was named Leaf Captain in 1982 but lost his captaincy when he slept in and missed a 7.15 a.m. practice in Minnesota in February, 1986.
Like many stars,he got in owner Harold Ballard’s doghouse on occasion. Ballard was famous for meddling in matters both in the dressing room and on the ice.

Vaive spent one more season in Toronto before the trade to Chicago.
He scored 299 goals as a member of the Leafs during eight seasons in Toronto. He also led the Leafs in scoring in 1981-82 (89 points), 1983-84 (93 points) and 1984-85 (68 points). The Leafs made the playoffs five times during his eight years with the team. He was also successful in making a number of shrewd business moves and endorsements while wife Joyce became a teacher in Toronto. Both were involved in charity work.

Vaive  played on Toronto’s off-season charity softball team and organized the Rick Vaive Charity Golf Classic at the Belvedere Golf Club in Charlottetown each summer in the early to mid-1980’s. Funding raised in the celebrity tournament (including Wayne Gretzky in 1986) went toward cerebral palsy.  Some controversy occurred in 1987 when Prince Edward Island Premier Joe Ghiz’s wife Rose Ellen was refused entry in the all-male tournament.

One of the celebrities at the tournament in 1986 was fiery new Leaf head coach John Brophy who was an instant hit with the local media. Brophy had been assistant coach to Dan Maloney the previous two seasons and was glad to inherit Vaive as the team leader. Both of them east coast raised (Brophy from Antigonish, Nova Scotia) and they had crossed paths before in Birimingham where Broph was head coach in Vaive’s first pro season.

Vaive, nicknamed “Squid” played under several coaches in his first few years in the NHL.  He started with Harry Neale in Vancouver then the legend Punch Imlach in Toronto followed by Mike Nykoluk  (under whom Vaive flourished at the peak of his career with the Maple Leafs), then Dan Maloney and finally Brophy.  In the 1981-82 season Toronto super star Darryl Sittler was traded to Philadelphia which ended an era. The Leafs became Vaive’s team as he was named Captain. Toronto had other big name stars like Borje Salming, Lanny McDonald and John Anderson in the early 80’s.

Time finally out on Rick Vaive in Toronto in early September, 1987 when he was traded along with left winger Steve Thomas and defenseman Bob McGill to Chicago for left wing Al Secord and right wing Ed Olyczyk. 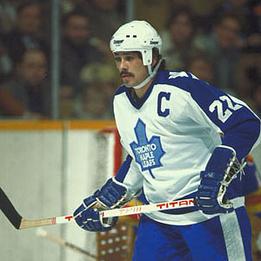 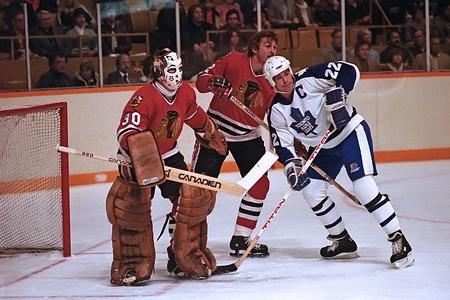 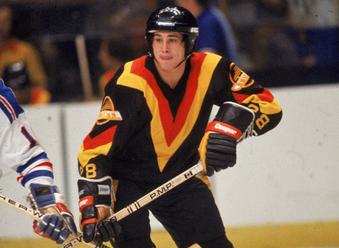 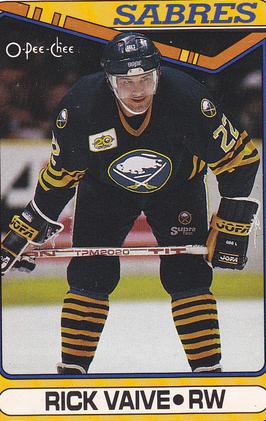 1987 wasn’t exactly a great year for Vaive.  His goal production had slipped three straight seasons (35, 33, and 32) but he was still productive getting over 60 points per year.  But he had not been in the good books with team owner Ballard or General Manager Gerry McNamara since the sleeping-in incident.
Hand and wrist injuries in 1985-86 limited him to 61 games.  He also suffered a pinched nerve in neck which occurred in October, 1986.

Vaive spent parts of two seasons Chicago (scoring 43 goals in 1987-88) but was dealt to the Buffalo Sabres after 30 games in1988-89 for Adam Creighton. He spent the next four years in Buffalo scoring 29 times in 1989-90.  Injuries began to mount that began with being speared by Chris Chelios and Steve Martinson during a game vs. the New York Rangers in January, 1989.  A pinched nerve in the neck and a groin pull also limited his time (Vaive wore a horse collar after the neck injury).  Then to further reduce his playing time, a pinched knee cartilage  required surgery in the training camp in September, 1990  and he missed part of the 1990-91 season with a bruised left shoulder when checked by Bob Sweeney during a game a month later on his return.

He also was one of a number of players who suffered from “gunk” which was a rash picked up on the hands from wearing hockey gloves at the time that would get wet with sweat and  grow bacteria in the form of a fungus  that led to a rash on the back of hands and wrists. (Tom Reid, a player with the Minnesota North Stars in the 1970’s had to retire from hockey because of the red rash that affected his skin believed to have come from the dyes in his equipment.)

Vaive played his final NHL season in 1991-92 at age 33. He split the year between the Sabres and Rochester Americans in the AHL.

Ironically, he was back in the Vancouver Canucks organization in 1992-93 with the Hamilton Canucks of the AHL where he was an assistant player-coach after signing as an unrestricted free agent in September.  Vaive played his only professional game in his hometown in Charlottetown late that winter.  The baby Canucks played the St. John’s Maple Leafs in the Charlottetown Civic Centre (St. John’s was forced to play its home games on the road due to a civic strike that year).

He became the first head coach of the South Carolina Stingrays in the ECHL  in 1993-94 and continued on for five seasons winning the league championship in 1996-97 (with a 45-15-10 regular season record). He was also named director of hockey operations for the team in 1996-97.

In 1998-99 he was named head coach of the AHL’s Saint John Flames and stayed there the next two years making the playoffs in each season.  Then it was a year with the Mississauga Ice Dogs in the OHL which was disappointing (3-56-7).

Vaive came out of retirement to play for the Dundas Real McCoys in the OHA Sr. League at age 42 in 2002-03.

He has been active as a member of the NHL Oldtimers charity hockey team and has appeared in several NHL alumni games. He even tried his hadn as a hockey analyst on The Score (now Sportsnet 360) from 2001 to 2003.

Rick Vaive was inducted into the PEI Sports Hall of Fame in 2000.

The goal total is the most for any PEI born or raised player. He used a Titan hockey stick most of his career which triggered a lot goals.

He still holds the record for most goals in a season by a Leaf with 54 and most career goals by a right wing with 299.

His three 50 goal seasons are still a Toronto player record.

And there is no doubt he is the best goal scorer to ever come from PEI.

There is also no doubt he was one of the most physically punished players in the league. It stemmed from being a goal scoring threat but he never backed down from the odd scrap. Often he was a marked man out on the ice and took a beating on the boards from opponent’s checks plus a lot of what would be called “dirty” stuff.

Rick and Joyce’s son Justin Vaive is a minor league pro left winger who was born in July, 1989 in Buffalo. He was drafted by the Anaheim Ducks in 2007 and was with the Rochester Americans in 2016-17.  The name Vaive carries on.