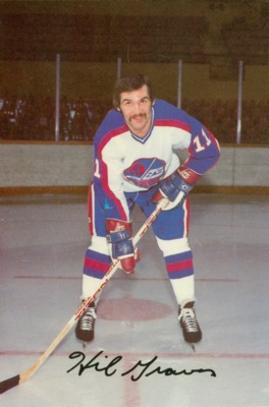 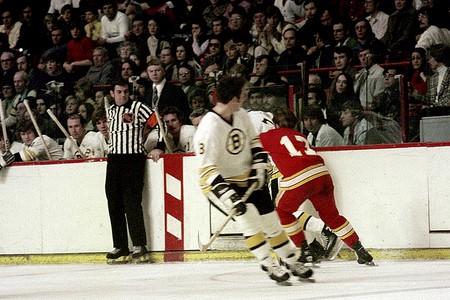 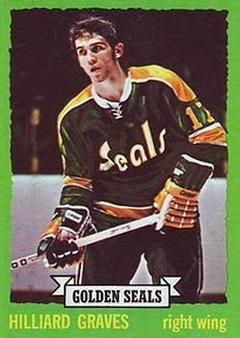 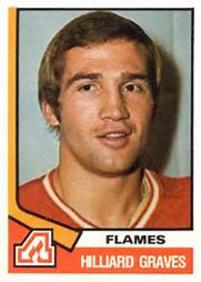 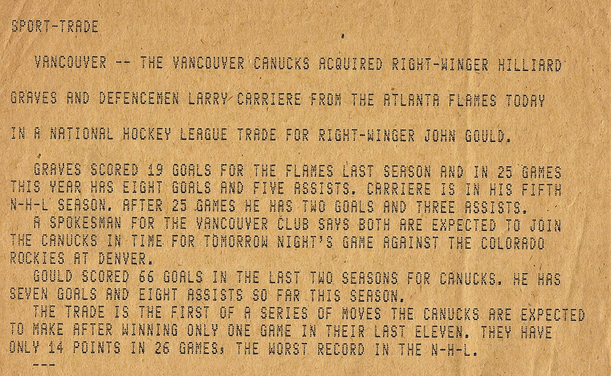 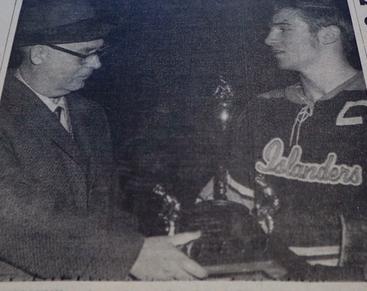 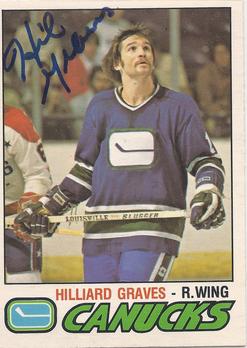 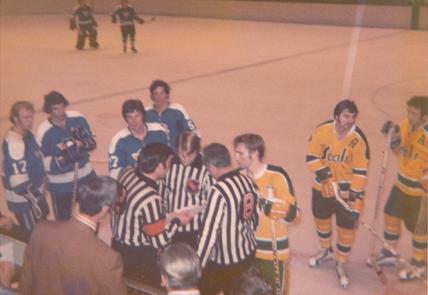 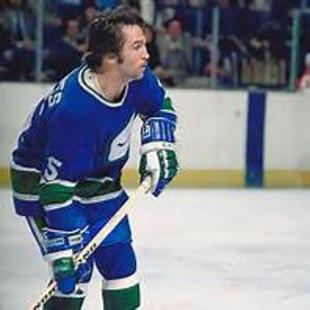 It was announced in Charlottetown and the first NHL trade to be announced outside an NHL city since the 1950's. 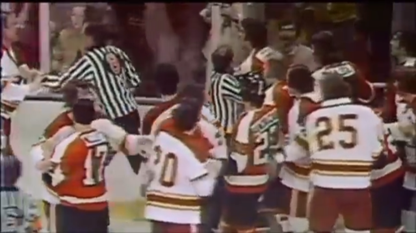 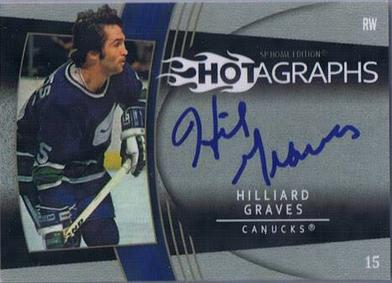 The trademark that is best remembered by NHL opponents who played against Hilliard Graves, described as a reckless body checker and sometimes a pest on the ice. He could also scrap and never backed down if he was provoked. He was also a goal scorer.

In his amateur days Graves was Captain of PEI’s infamous junior team in the late 1960’s and early ‘70’s.

The former Charlottetown Junior Islander was born in Saint John, New Brunswick on October 18, 1950. He grew up in Dartmouth, Nova Scotia and caught the eye of Islanders scouts for his skating ability, energy and creativity with the puck. Under Head Coach Jack Hynes, Hill now a 19 year old, helped the Islanders to greatness with 16 goals and 42 points in his first season in the Maritime Jr. Hockey League and an impressive 32 goals and 97 points in just 38 games in 1969-70. They ran away with first place with a 38-6-2 record and defeated the Cape Breton Metros for the MJAHL championship. That same spring the Islanders lost a tough series to Guy Lafleur and the Quebec Remparts in an infamous series in the Eastern Canadian semi-finals. Graves’ team-mates including future NHLers Al MacAdam and Bobby MacMillan.

Despite his playoff prowess Graves went undrafted but did sign as a free agent with the California Seals in October, 1970.  The Seals were coached by Fred Glover who played with Detroit and Chicago in the 1950’s and were not a very good team or franchise for that matter.  Graves  played in just 14 games with the big club and spent most of the season with the Providence Reds in the AHL.  He also spent a full season in Baltimore in the AHL before joining the Seals for 1972-73 and had a break out season with 27 goals and 52 points in 75 games.   His rookie year would be his best season until another 21 goal year with Vancouver in 1977-78 playing in 80 games with the Canucks.

Graves, a right winger, finished third in the Calder Trophy (NHL rookie of the year) voting in 1973 finishing behind Steve Vickers and Bill Barber.

Team-mate Reggie Leach was impressed, “He could skate like the wind and was one of the toughest little players I’ve seen.”  Graves was 5-11 and weighed about 170 pounds.

The sophomore jinx hit Hilliard the following season as a battle asthma which took most of the year for doctors to properly diagnose and medicate. He was traded in the summer of 1974 to Atlanta for forward John Stewart and would manage 37 goals and 91 points in 172 games with the Flames. He set a team record for right wings with 30 assists in 1975-76.

On December 2, 1976 another trade came which sent him to the Vancouver Canucks. The deal was actually announced before it became official via a radio report in Charlottetown to the Canadian Press (the first trade announced out of non-NHL city since the 1950’s).  CFCY sports reporter Dave Holland received a phone call from Graves’ harness racing stable at the Charlottetown Driving Park from one of his staff Buddy Myers early that morning.  Myers, who had spoken to Hilliard, had all the details on the trade (see the CP press release). Graves had  keen interest in harness racing by this time as an owner and also as a driver.

Graves spent the next three seasons in Vancouver along with a couple of stretches with the New Brunswick Hawks in the AHL.  He was left unprotected in the 1979 NHL expansion draft after the merger with four WHA teams and was selected by the Winnipeg Jets where he played in 15 games before heading back to Moncton and the Hawks and briefly with the Tulsa Oilers in the minors.

He retired after 1980 having played in 556 NHL games, scoring 118 goals, 163 assists for 281 points. 14 of his goals were game winners. He had 209 minutes in penalties.  In his rookie year he was 7th in shooting percentage in the NHL.  He only got to the playoffs once in his big league career with the Flames in 1976 and they were swept three straight in a short series.

“It was depressing, always being on a loser because I considered myself a better-than-average player,” he said at the end of his career.

Hill vs. The Hammer

Back to the hip checks, which was a Graves specialty….he was the scourge of some teams because they thought on some occasions he was trying to hurt someone. He was accused of injuring a few opposint players. He also was heralded as being the best hip checker in the league (the hip check is perfectly legal and the standard way to hit an opponent using the body). In 1976 the NHL coaches voted him the best body-checker in the league. Larry Robinson and Denis Potvin were the runners-up.

“I could really hip-check and the fans loved it. I never got a whole lot of penalties.”

The Broad Street Bullies of the ‘70’s, the Philadelphia Flyers were one team that targeted Graves.  Dave “The Hammer” Schultz was one guy who ended up feuding with him after Schultz was given a taste of his hip check and couldn’t quite forget it.  The Flyers legendary tough guy had frequent fights with Graves who held his own most nights against Schultz.  He earned the respect of the league.  California coach Fred Glover believed Graves could beat up The Hammer on any given night and would frequently start Graves against Shultz.  There fights galore and often the Seals needed a police escort to get out of the building in Philly. In late January, 1974, before the final meeting of the season with the Flyers, Graves said to expect a war.

“I’m not afraid of him.” Graves said of Schultz. “I beat him twice before and I’m ready to do it again if I have to.”  A season-high, 10,776 showed up at the Oakland Coliseum for the game with the Flyers.  Usual crowds were only about 7,000. Philadelphia won, 5-0.

He also had an encounter off the ice at a bar in Chicago called the Rusty Scupper with all-time great Bobby Orr. This was after the Canucks had played the Blackhawks. Orr was down with one of his many knee injuries and had joined some of the Vancouver players including Graves at the bar. Orr made a remark about some of the Canucks players not putting out much of an effort on the ice and ended up with a scuffle with Graves. Later Orr apologized for instigating the incident.

Graves, as mentioned, has also been involved for years in harness racing in the Maritimes. After retiring from the NHL he returned to Dartmouth to manage Amca Food Brokers. His second professional sports career came as an owner of harness horses and as a driver.  He also started an interest in tennis.  He was named the Driver of the Year for 2013 at Truro Raceway in Nova Scotia.

Many say he was one of the most underrated players in the NHL in the 1970’s.

Hilliard Graves is member of the Nova Scotia Sports Hall of Fame. 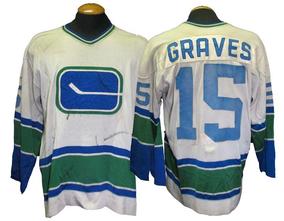