After scoring 46 goals in only 20 games over three seasons with the Summerside Crystals senior hockey team, Charlie Cahill (pronounced Cal) caught the eye of the Boston Bruins who signed him to a professional contract for the 1925-26 season.  What likely added to the Bruins decision to ink the Summerside native was him playing on the Crystals of 1924-25, who dethroned the powerful Charlottetown Abegweits as Island Senior champions.
Charles "Moose" Cahill was born in January 4, 1904. He joined the Summerside hockey club in 1922-23 as nineteen year old.
The Crystals (named after the team sponsor, Crystal Dairy) were dominant in winning 7-2 over the Abbies in the final game in the playoffs on January 31, 1925. Two star members of the Charlottetown club were by then, long gone. John "Wacky" MacEachern and Roy Prowse had been scouted and added to the Boston Bruins negotiating list from the previous season. Neither would make the NHL club.  But Cahill did.  He joined the Bruins in training camp in the fall of 1925 and would play in 31 games after signing a contract on December 1st. The 21 year old, 5-10, 180 lb. right winger earned an assist during the season, becoming the first Islander to pick up a point in the National Hockey League.  Among his team mates were defensemen Sprague Cleghorn and Lionel Hitchman, both stars in the 1920's. The Bruins finished 17-15-4 that season but missed the playoffs. Cahill played in only one game with the Bruins in 1926-27 before being shipped out to the New Haven Eagles of the Can-Am League. He was sold to the Eagles on January 31, 1927. He played four more seasons in the minor leagues, finishing with the Buffalo Bisons and Philadelpia in 1930-31 hampered by a leg injury
He returned to the Crystals senior team, making a comeback in 1935 that lasted until 1939. He also refereed local games and had a keen interest in harness racing. He was inducted into the PEI Sports Hall of Fame in July, 1970.
Cahill  died on June 5, 1954. That was the same year Summerside's new arena opened and named in his memor.. Cahill Stadium became a landmark in the community for the next 50 years.
Charilie Cahill is pictured in the back row, second from the right, in this 1925-26 Boston Bruins team photo.

Boston Bruins 1925-26. Charlie Cahill is second from the right on the top row 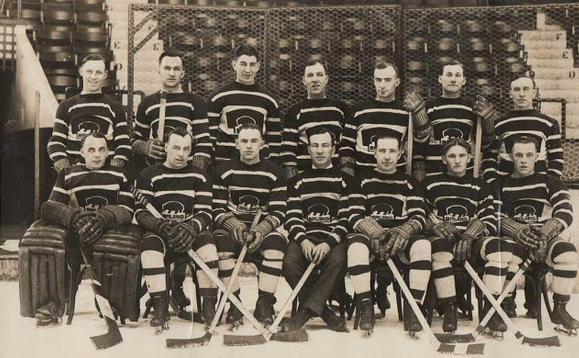 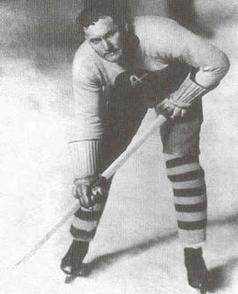