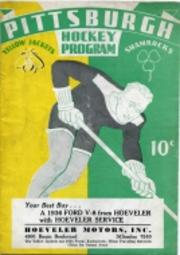 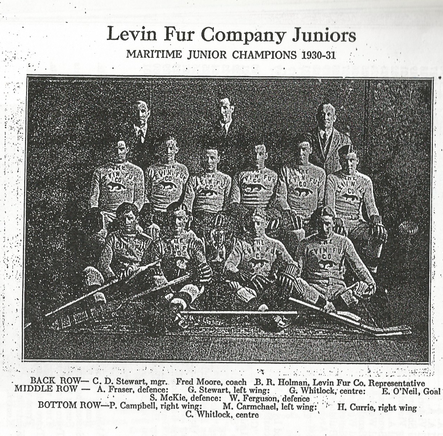 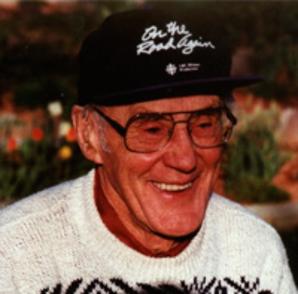 Eric Irvine “Tiger” MacKie was born in 1914 in Stanley Bridge, PEI and was on skates by the age of four. His first hockey team was the Stanley Bridge Trailrangers and his first skates were “Automobile Skates” which was the brand name. The future professional player says they were a “very fast skate”. He would have many pairs of skates over the years playing until the age of 80.

MacKie also played for North Wiltshire in an outdoor rink behind the United Church in Hunter River in his teen years.  He remembers one cold winter’s day he hit both goal posts and a cross bar in one game.  No luck on that particular day but there would be better days ahead.  The young defenseman would go to play for the 1930-31 Maritime Junior Hockey Champions from Charlottetown and on to the professional ranks in the mid-Thirties.

His grandson Richard Little would also become a star player with the UPEI Panthers in the mid-1980’s who won the Atlantic University Championship.

MacKie’s hockey career came along at the right time.  When interviewed on the audio series “Island Voices” in 1994 he claimed to be one of the first players on the ice at the new Charlottetown Forum which opened at the start of the 1930’s and was built at a cost of $174,000.   MacKie was a member of the Silver Foxes Junior hockey team sponsored by the Levin Fur Company that would beat Moncton, 6-0 in the final of a best of three series in the spring of 1931 and claim the regional junior title. Fed Moore coached the squad that season.

MacKie was a big kid, six feet tall and 186 pounds. He played on the Southport Mohawks the following season and then a high school team before turning pro.   He recalls one stormy winter evening where he begged his mother to let him cross the Charlottetown Harbour despite the temperature around 16 below so he could take in an hour and a half practice with his team at the Forum. It was too dangerous to take a horse across the frozen Harbour so he decided to ski instead. “I wanted to take in the practice badly and just skied across the ice. I hid my skis under the wharf and walked uptown to practice,” he recalled.  “I had my stick and skates over my shoulder and was glad to get there.”  After practice MacKie went to Milton’s Old Spain restaurant on Kent Street and enjoyed a hot chicken sandwich, ice cream and two glasses of milk which cost $1.30.  He was elated he managed to get the team practice in and glided on his skis back home to Southport (now Stratford).

Tiger MacKie grew up watching the great Abbies Junior teams of the early to mid-Twenties. He said Sugar Gordon, who was small in stature, was the fastest skater he ever saw.  “He just floated on the ice.” Another favourite was Pete Kelly, who was would score the game winning goal as the Detroit Red Wings won the Stanley Cup over the Toronto Maple Leafs in 1936.

MacKie played in Calgary with the Tigers in the 1932-33 season. He had 9 goals and 11 points and a career high 42 minutes in penalties.

Boston Bruins great Art Ross was coach and general manager of the NHL team from 1924 to 1945. He was impressed with what he saw in MacKie and invited him to training camp in the fall of 1935.  A signing offer of $5,000 was given to him a few months before. He didn’t say anything about the offer until he got to camp.  He wound up in Baltimore with the Orioles in the Eastern League where joined fellow Islander Johnny Squarebriggs who he called a fine team-mate with “a beautiful personality”.

Baltimore brought in a new coach and MacKie and Islander Pud Whitlock were among the players let go after just a few weeks.

His next stop was the Pittsburgh Yellow Jackets in the 1935-36 season in the Eastern League after the short stint with the Orioles. MacKie played on defense but was known for his grit and determination and was soon moved to a line with another Maritimer, Gordie Drillon and Harvey MacClelland. Drillon, who would later play for the Toronto Maple Leafs, had 22 goals and 34 points in 40 games that season. MacKie was paid $40 a week but received $5 bonus money per week during a seventeen game stint playing on the Drillon line. He also managed to save $800 that winter which was big money in that economically depressed decade.  MacKie was a hard hitting left winger who managed to protect the star players on the line.  Drillon went on to a great career in Toronto and won the NHL scoring title with 52 points in 1937-38.

Tiger MacKie played with Windsor Chrysler in the Michigan-Ontario Hockey League the next two seasons. He was one of the few players to wear a helmet every game back in those days. The leather helmet was given to him by Art Ross while in Boston. He says it saved his life in a game in Detroit while with Windsor. He lost his balance and struck the back of his head hard on the ice.  MacKie says the blow would probably have killed him save the helmet.

MacKie moved back to the Maritimes and played with the Glace Bay Miners where he said he could earn more money each rather than playing in the minor pros in the U-S. He made $75 as his pay for a week of hockey in Glace Bay or $25 more than what he would have got in the minor professional ranks.

MacKie settled with his family in Port Hawkesbury, Nova Scotia and continued to play oldtimers hockey until he was 80.  A broken nose during one of the games and heart trouble put him on the sidelines. He passed away eighteen months later following his final game. Why play until you’re 80 he was asked?  “It’s a game that is never over until it is over.”