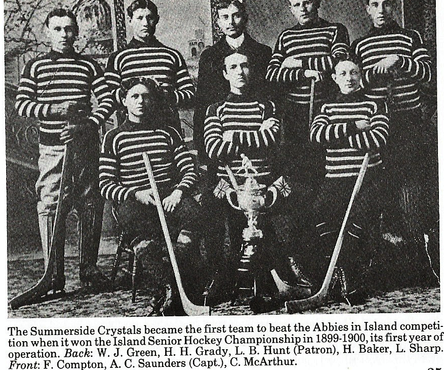 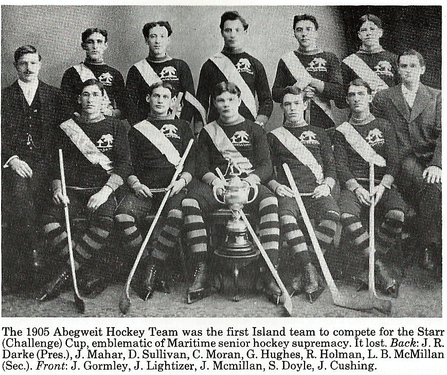 The game of hockey began to flourish on the Island in the 1890’s.  It grew in popularity especially in Charlottetown, the Island capital and Summerside. Three teams dominated PEI Senior Hockey between 1897 and 1925, the Charlottetown Abegweits, Charlottetown Vics and the Summerside Crystals. The Abbies won eleven provincial championships including the first in 1896-97 during those early years. The Victorias or Vics won six times and the Crystals captured the provincial championship five times. No championship was decided in 1905 due to controversy over the playoffs.  World War I disrupted the senior league between 1914 and 1918.  There was no senior championship again until 1920-21.

The Charlottetown Vics won three straight Maritime titles between 1911 and 1913 taking the Starr Trophy as regional champs.  The Abegweits won the Starr Trophy in 1922 and 1923.  The natural rivalry between Charlottetown and Summerside was spawned in late March, 1897 when the Abbies edged the Summerside, 4-3 and were declared the first Island champs. PEI Hall of Famer Lou MacMillan played on that Charlottetown team. He came over from the fledging Victorias formed in 1895.  Other early stars on the Abbies included Toby MacMillan, Gordon Hughes and team captain Lorne “Whitey” Unsworth who was lauded for his stamina and leadership abilities that would be evident in many Island hockey stars in the years that followed.

Professional hockey began in 1911 as Moncton, New Glasgow and Halifax formed teams in a new league that attracted players away from the amateur ranks.  Then World War I broke out and organized hockey was put on hold.  If you study the team pictures from those days you will notice only seven men per team. In other words they played all 60 minutes.  Hockey grew as a popular winter sport in its first twenty years on the Island. Special trains carried fans all across the province from Souris to Tignish as they jammed into rinks and arenas. All of the players became instant heroes and were cheered on by the hundreds who turned out to see them play.  Future stars like Jack “Sugar” Gordon, Ches Campbell and Bill Gillespie were established during the War years.

The Abegweits won four consecutive Island senior titles in 1921-22-23-24 and captured the Starr Trophy as Maritime champs in 1922 and 1923.  The first hockey dynasty on PEI was born.  They won thirty games in a row at one point.  The stars on those teams included Fred Kelly, John “Wacky” MacEachern, Harry Morgan, Ches Campbell and “Sugar” Gordon.  Rosters had grown to twelve players by then. In the fall of 1923 the Maritime champs played the Toronto Granites, who were bound for the 1924 Winter Olympics and lost by a score of 4-1 in a match played in Saint John, New Brunswick. “Wacky” MacEachern and Roy Prowse were recruited by the Boston Bruins in the NHL.  In the spring of 1925 the Abbies bid for a fifth straight win in the Island finals came to an end as the Summerside Crystals ended their run. The new champs included future Boston Bruin Charlie Cahill.  Summerside lost to Truro in the Maritime finals.

The Abegweits of 1921-22-23 are generally considered to be the greatest amateur team to come out of the Maritimes, up to 1973 when the team named to the PEI Sports Hall of Fame, fifty years later. 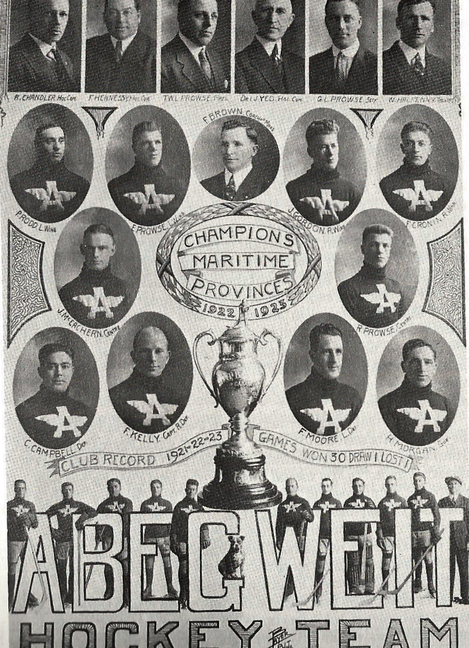 You can learn more about hockey in the 1890's to 1920's by reading Abegweit Dynasty (The Prince Edward Island Museum & Heritage Foundation) and More Than Just a Game (The Acorn Press, Charlottetown) both written by H. Charles Ballem 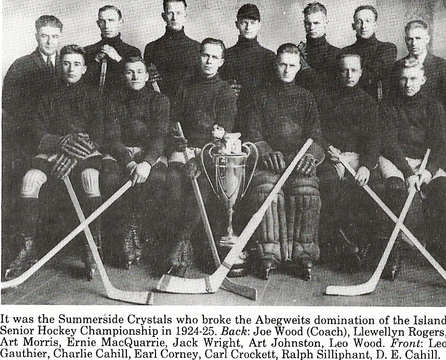