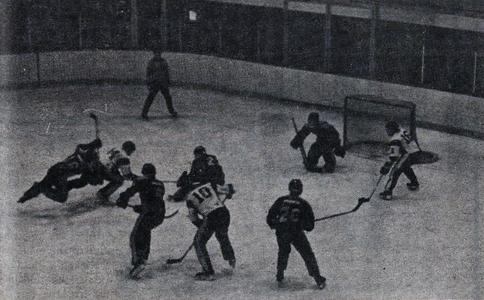 Celebration time, 1985! The Panthers capture their first AUAA title at the Forum. Player Doug Currie (top) is all smiles 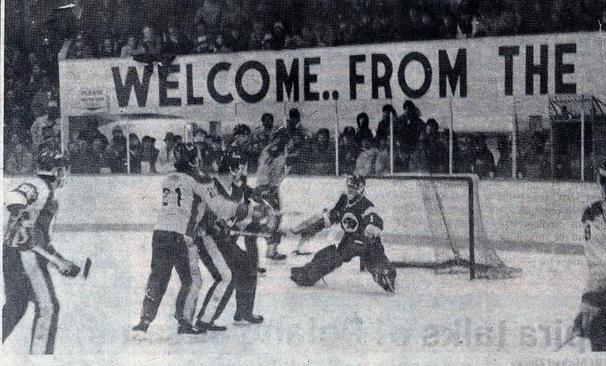 During a seven year period between 1985 and 1991 the University of Prince Edward Island boasted four Atlantic University Athletic Association men’s hockey championships making the Panthers one of the most successful teams in modern history.  The Panthers under Head Coach Vince Mulligan won the AUAA in 1985, 1987 and 1988. They repeated three seasons later with former NHL star Bill MacMillan coaching the team in 1991. The Panthers were made up of talented junior grads from the Island and some well picked recruits during that time.

UPEI had some lean years prior to their charge toward success in the mid-1980’s.  The Panthers made their debut in 1969-70 after the merger of St. Dunstan’s University and Prince of Wales College.  Jack Kane was the coach of a group of players that lost only once on home ice but won only a single road game. Kane continued to coach the Panthers over the next several seasons with varying degrees of success. Future NHL star Alan MacAdam was the team’s rookie of the year and MVP in 1971-72.  Vince Mulligan had his first stint as coach of the men’s program the following season led by Bill Weatherbie who was the MVP in 1972-73 and top scorer in 1973-74.  Steve Van Diest, who was a netminder for the Charlottetown Junior Islanders, was an All-Conference goalie for two straight years.  Kane returned in 1974-75. The Panthers finished 7-11.  Don Brown was MVP for UPEI for years running.   UPEI played all its home games at the University Rink which was usually filled to the rafters. Super fan Mike Kennedy could be seen  at every game perched in front of a steel drum in the south end of the rink. His thumping inspired the big crowds that took in the games in the close, friendly confines of the old rink.   The Panthers moved to the larger confines of the Charlottetown Forum in 1975-76. Kennedy brought his steel drum to the new digs for UPEI.  That season there were high expectations for the improved Panthers which did not pan out. They finished 7-16. Lennie Kelly was the team MVP and leading scorer and the outstanding rookie was Wilf MacDonald. It was Kane’s last season as head coach.

Jack Hynes, who less than a decade earlier coached the Charlottetown Junior Islanders to a near Centennial Cup, was named the new coach for 1976-77 and guided the team to a 12-7-1 record but was swept in the playoffs, 6-3 and 4-3 by St. F.X.  Wilf MacDonald and Val Mitchell were named to the All-Conference team. Mitchell led UPEI with 16 goals, 38 assists and 54 points. Future NHL player Dave Cameron had 11 goals, 14 assists and 25 points. Doug MacLean, who made his mark in the NHL as an executive, coach and Sportsnet analyst, had a pair of goals and assist. A year previous the right winger had 9 goals, 12 assists and 21 points.

The 1977-78 season saw MacDonald and Cameron named to the AUAA All-Conference team. Hynes was named Coach of the Year for guiding UPEI to a third place finish.

MacDonald was the Conference MVP in 1978-79 as the Panthers had a third straight winning season. Cameron led the team in scoring but a late season injury forced him to the sidelines.   In 1979-80 Shane Turner was the Panthers MVP and Rory Beck led the team in scoring.  The Panthers under Jack Hynes made the playoffs in 1980-81 but were eliminated in the quarter-finals by the powerful Dalhousie Tigers. Norman Beck set a Panther record that still stands with 31 goals, 32 assists for 63 points in 31 games.

In 1981-82 the start of a huge arch rivalry began to burn as the Moncton Blue Eagles defeated the Panthers for the AUAA championship. It was UPEI’s first appearance in the conference final since 1971-72.  Gary Trainor, Mike Ready, Norman Beck, Brian Ostroski and goalie Avelino Gomez were named AUAA All-Stars. Gomez was the son of famous Toronto horse jockey, Avelino Gomez, Senior.  Another family tie – Trevor Crawford was the team MVP.  His son Corey became  a Stanley Cup winning goalie with the Chicago Black Hawks.  Beck set a Panther record with 9 points in one game that season, a record that still stands, today.

In 1982-83 the Panthers were led by some new faces including leading scorer Ron Carragher and a future PEI Provincial Court Judge, Jeff Lantz on defense.  The 1983-84 season saw a change in coaches with Hynes not returning and Vince Mulligan behind the bench again for the first time in a decade.  UPEI finished third and lost out to Moncton in the AUAA semi-finals. Freshman Greg Gravel powered the team winning the conference MVP award after being the AUAA in scoring. He was also Rookie of the Year. Gravel was also named a CIAU All-Canadian. Gravel, from Kapuskasing, Ontario was a 5-9, 185 pound centre who played for the Oshawa Generals and Windsor Spitfires in the OHL. He was drafted by Pittsburgh in 1982 but chose a university education instead. Gomez was also named to the Conference All-Stars.  Getting knocked out by the Blue Eagles in the playoffs meant some unfinished business for Vincie Mulligan’s Panthers.  The Panthers would make some history the following season.

This year was going to be different. Vince Mulligan had a line-up that featured a mix of former PEI junior stars and recruits like goalie Tony Haladuick who would MVP honours on the team.  The Panthers practiced at the UPEI rink and played their home games in front of big crowds at the Forum.  The forwards were star players like Greg Gravel, Randy Muttart, Ron Carragher and Albert Roche and brother Gordie. All proven goal scorers and playmakers.  The defense was anchored by Darwin McCutcheon and Rob Moffatt.  Dave Reid was a suitable backup in the nets for Haladuick.

Arch rival Moncton would win seven AUAA titles in eleven seasons that included six in the 80’s (1980-81-82-83-86-89) and the 1990 title.  The Aigles Bleus matched the Panthers with three strong forward lines in 1984-85. Claude Vilgrain, a future NHL player (Vancouver, New Jersey, Philadelphia) was the Blue Eagles star right winger.  The native of Port-Au-Prince, Haiti won the scoring championship over Gravel with 35 goals, 28 assists and 63 points in 24 games. Goalie Dave Quigley back stopped Moncton in the nets.  Jean Perron coached the team.   He became the head coach of the Montreal Canadiens for three seasons the following year and then coached the Quebec Nordiques in the NHL.

UPEI had a #1 ranking in the CIAU and set a record with 14 straight victories. The Panthers put away the Dalhousie Tigers in the conference semi-finals and then faced the Moncton in the finals, a best of three series which began in the J. Louis Levesque Arena at the University of Moncton. Randy Muttart scored a late goal as the Panthers won on the road.

UPEI and Moncton went to overtime in the deciding game at the Forum on a Saturday afternoon with the old rink filled to the brim. Haladuick made a key save on a Vilgrain breakaway which forced overtime. Workhorse Bob MacDonald beat Quigley in the extra period and the Forum exploded with excitement.  Over 20 years after St. Dunstan’s won the last Atlantic University title for PEI, the Panthers celebrated.

Panthers coach Vince Mulligan outsmarted a soon-to-be NHL coach in this series. Mulligan, a likeable players coach, did not take the credit.  He said his players did the job. But you have to believe the former St. Dunstan’s star was beaming inside with the effort.

UPEI travelled to Ottawa to play the Gee-Gees in the national playoffs but lost the series.

Gravel, Haladuick, Moffat and McCutcheon all made the AUAA All-Stars. McCutcheon was also named a CIAU All-Canadian. Moffat was named the Panthers Rookie of the Year. Gravel was also the UPEI Male Athlete of the Year for 1984-85.

In 1985-86 the Panthers welcomed rookie Dave Shellington, who would play a big role in future championship runs. Albert Roche tied a team record (set by Bill Doherty in 1973-74 and tied by Trevor Crawford and Shane Turner) with five goals in a game.  The Panthers were in a rebuilding process and did not defend their AUAA title.

The Panthers won a second AUAA crown in three years. Ron Carragher, Steve Fulton, and Kevin Skilliter were named to the conference All-Star team. Carragher was team MVP and UPEI Male Athlete of the Year.  Craig Jenkins, who would  play with Carragher on the Charlottetown Armour Fence Islanders Allan Cup champs in 1991, was the Panthers Rookie of the Year.

UPEI lost to the University of Saskatchewan Huskies in the national playoffs, dashing the hopes of another shot at the national title.

The Panthers were near unbeatable finishing with a 22-2-2 record and defeating Mount Allison, Acadia and Moncton in the playoffs to win a second straight AUAA championship.  That put UPEI in the CIAU Nationals at Varsity Stadium in Toronto, hosted by the University of Toronto Varsity Blues.  The Panthers lost 3-1 to the Western Mustangs.

Vince Mulligan was named AUAA Coach of the Year.  Gravel, Shellington, Skilliter, Fulton and Haladuick were AUAA All-Stars. Fulton was an All-Canadian and Haladuick was UPEI’s MVP and co-winner of the university’s Male Athlete of the Year Award.

Vince Mulligan took a year’s leave of absence as coach which caused some controversy after his success with the team over five years. It appears the Athletic Department was looking for a new direction.  Former NHL star and St. Dunstan’s grad Bill MacMillan took over as coach.  The Panthers were in a heavy rebuild but finished third behind St. Thomas and Moncton.  The Tommies, coached by Island native and former Panther Al MacAdam, put UPEI out in the quarter-finals.  Dave Shellington led the Panthers in scoring and was team MVP. He and Bob Giffin were AUAA All-Stars. Giffin was also named an All-Canadian.  Dave “Tucker” Flanagan was the Panthers Rookie of the Year.

Bill MacMillan was named the full time coach with Vince Mulligan stepping down permanently.  MacMillan carried strong credentials as an assistant coach with the New York Islanders who were a Stanley Cup dynasty in the early 80’s. MacMillan was also a General Manager with the New Jersey Devils. The Panthers finished second behind Moncton and surprised UNB and Acadia in the playoffs before bowing to the Blue Eagles who went on to win the CIAU national title.

It was back to glory and the CIAU Nationals for UPEI this season. The Panthers moved from the old Forum to the brand new Charlottetown Civic Centre during the playoffs.  They played their final game ever at the Forum as they met Acadia.  The next home game was at the Civic Centre. Dave Flanagan scored the last official goal at the Forum and the first in the new arena on Kensington Road

Goalie Jamie Blanchard played a big role in helping UPEI facing Dalhousie in the finals. UPEI lost in the nationals in Toronto.

Richard Little and Derek Clancy were AUAA All-Stars and All-Canadians.  Rob Giffen was named to the national tournament All-Star team.  Little was the Panthers MVP.

The trip to the CIAU nationals would be the last for UPEI through 2016.  However, four AUAA championships in seven seasons was nothing short of spectacular for the boys from the University Ave. campus.

UPEI goalie Tony Haladuick makes a save facing the University of Moncton Blue Eagles (Aigles Bleus) in a 1985 AUAA championship game. Note the Cooperall pants on the players, The one piece pants/knee pads were popular in the mid-80's 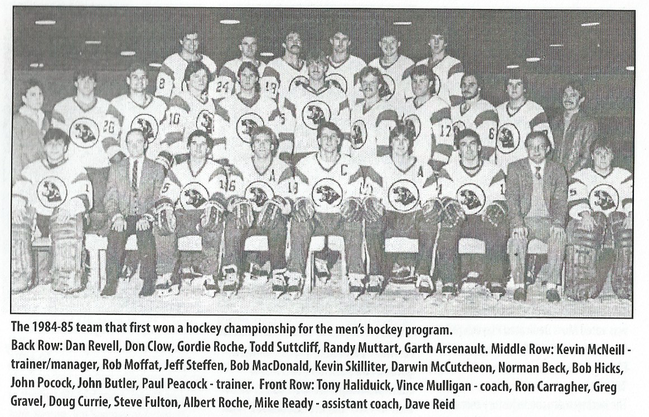 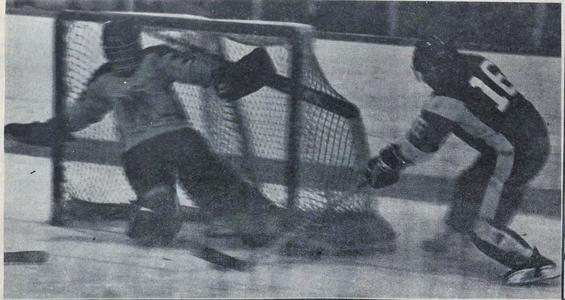 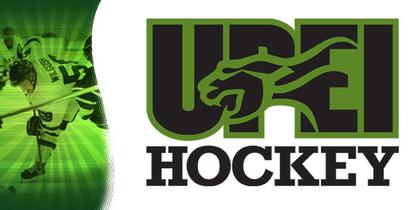 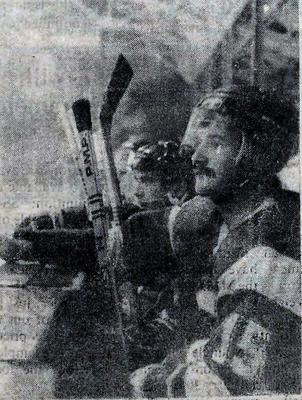 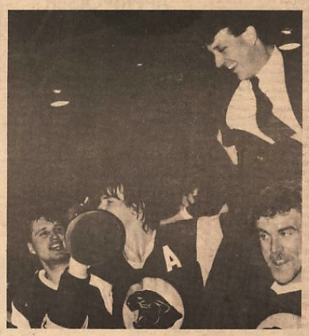 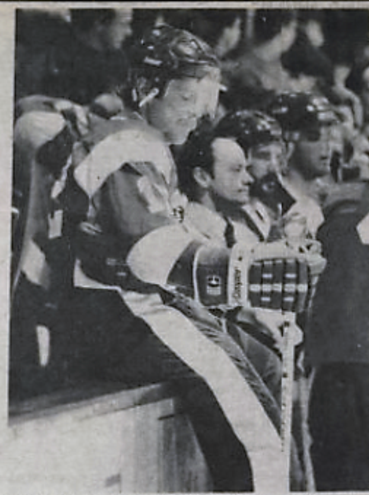 The series loss to Ottawa was hard to absorb for Panthers player Norman Beck & Coach Vince Mulligan in the 1984 national playoffs. The Gee-Gees won, 2-1 and 3-2. 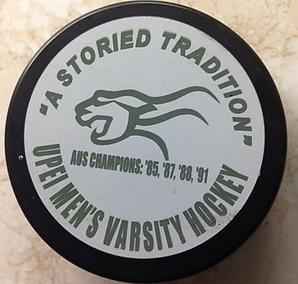 UPEI at Moncton Blue Eagles, 1985.  #14 Randy Muttart tries to squeeze through the defense. #16 Greg Gravel at the side of the net.