Only a handful of UPEI Panther grads have made into the National Hockey League.

If you go back to St. Dunstan’s University days, there was Billy MacMillan who would 26 years after graduation and an NHL career rejoin the university as a head a coach.

Alan MacAdam went from a starry junior career into a solid AUAA player with the Panthers in the early 70’s and then his big-league career took off in Philadelphia and then California with the Seals.

David Cameron followed in the late 70’s and went on for a career with Colorado and New Jersey followed by coaching in the junior and pro ranks all the way back to the NHL.

Doug MacLean played for UPEI in the 70’s as well and his NHL career was in coaching, a trip to the Stanley Cup final with Florida and a chance to build an expansion franchise from the ground up before moving on to an influential TV analyst career.

And then there is Joel Ward, who unlike the other four is not Island born but certainly is recognized as a product of PEI for his days at the university with his goal from the outset to play in the NHL.

Joel was born on December 2, 1980 in North York, Ontario, a Toronto suburb to Cecilia and Randall Ward.   Both Mom and Dad were huge hockey fans of the Toronto Maple Leafs.  Randall took young Joel to his first game at Maple Leaf Gardens at an early age and like father, the son became a big fan as well. It was Dad who took to watch the Leafs contending teams of the early 1990’s including the ’93 team that had Doug Gilmour and reached the semi-finals before losing to Wayne Gretzky and the LA Kings. Dad inspired young Joel to be a player on Mom to be a fan.

Both his parents emigrated to Canada from Barbados. His mother was a nurse and his dad an auto mechanic.  Joel graduated from Sir Wilfred Laurier Collegiate Institute. He played with North York minor hockey teams in his youth.

Randall passed away when Joel was only 14 in 1994. Mom Cecilia took over to nurture and guide the teenage Joel through his formidable years and watched him grow into a fine hockey player and young man.

Joel was good enough to be drafted in the 15th round of the OHL draft and went on to play four seasons with the Owen Sound Platers beginning in 1997-98. His last season was his best in 2000-01 with 26 goals and 62 points in 67 games.  Ward was picked up by the Long Island Beach Dogs and got into eight playoff games that spring in the ECHL.

When he was 18 and eligible, his mom suggested they go to the 1999 NHL draft in Boston despite thinking he would have chance of being selected. Ward did it because his father would have wanted him to be there.  After over 270 picks his name was not called and he and mom left.

The University of Prince Edward Island showed interest in the Toronto native and he arrived on the campus in Charlottetown that fall.  As an unsigned free agent he had earned a professional tryout with the Wings during training camp in 2001-02 and fought for a spot on the roster before joining UPEI after being recruited.

After losing 18 of 26 games the year previous, Ward and new recruits arrived for 2001-02 at which had its first winning record in years despite some growing pains that led to strong second half. Joel had 13 goals and 27 points in 22 games and was named the Panthers Rookie of the Year under Coach Doug Currie who was the AUS Coach of the Year.

In 2002-03 the Panthers made the playoffs for second straight year but injuries to Ward and All-Canadian goalie Jason Flick resulted in an early exit in the first round of the postseason facing St. F.X.  Ward was the team MVP and made the AUS second all-star team and had 11 goals and 26 points in 19 games.

The Panthers played at the Charlottetown Civic Centre before returning to the campus with the arrival of the PEI Rocket of the QJMHL which became the prime tenant of the arena. The Panthers were back on campus for the first time since 1974-75 moving back in January 2004 and had a new head coach in Shamrock, PEI native Mike Kelly who had guided UNB to a national title in 1995-96. This Panthers team finished 13-13-1 and lost in three games to the Dalhousie Tigers in the first round. Ward 14 goals and 38 points playing in all 27 games and collected more silverware as team MVP, AUS Most Sportsmanlike Player, and again was a conference second team all-star again.

In his final season, Joel repeated as team MVP, AUS Most Sportsmanlike Player and was named as the conference MVP and leading scorer with 16 goals and 44 points. He was also a first team AUS all-star, made the CIS 1st All-Canadian team and was the most sportsmanlike player in Canada. He also was named UPEI Male Athlete of the Year for 2004-05. The Panthers finished 11-11-6 and claimed the last playoff spot. They lost in three games to Saint Mary’s in the first round. There is no doubt #22 (his UPEI number) was a fan favourite over four seasons but his mind was still on playing in the National Hockey League. The Panthers would not see a championship banner during his four seasons but he did help them back to the playoffs and became one of the all-time greats to skate at UPEI.  His #22 was raised to the rafters at the MacLauchlan Arena in Charlottetown years later.

“It was my final year playing college hockey in Canada. Four years of grinding it out, chasing an NHL dream that, with every winter in Charlottetown, seemed further and further away. There was no template — no guy who did four years, graduated and made it to the show. There were no scouts at my games, no agents calling me after practices. Sixteen goals in college hockey doesn’t quite pop off the page for a guy who is older than a good number of NHL players,” revealed the veteran forward after his final season with the San Jose Sharks two years previous in his official retirement statement.

I moved on from P.E.I. in 2005 (and graduated a year later with a sociology degree), found an opportunity down with the Florida Everblades in the ECHL. I signed a contract that would pay me like $700 a week or something, and it was just the best thing in the world. I’m playing hockey for a living. It was truly incredible.

He moved on to the Houston Aeros in the AHL in 2005-06 and played in 66 games getting goals and 22 points plus 4 goals and 6 points eight playoff games.

In 2006-07 he had 9 goals and 23 points in 64 and was recalled by the Minnesota Wild making his debut in the NHL at age 25 which made his dream come true. Ward wound up playing in 11 games and recorded one assist. His first game was December 11, 2006 against the Vancouver Canucks.

He was second on the team with 57 blocked shots and third in takeaways with 51. During the Stanley Cup playoffs he led the team with 7 goals, 6 assists and 13 points. He had a point in 10 of the Preds 12 playoff games.

He lead the Capitals with nine playoff points in 2015 and led Canada with nine points in the 2014 World Championship.

His second 20-goal season came in 2015-16 after signing as a free agent with the San Jose Sharks. He scored the game winner as the Sharks advanced to the Stanley Cup Final for the first time beating the St. Louis Blues in Game 6 of the Western Conference Final.

“If, back then, you would have offered me just one single game in the league … I would have taken it and run. And I know I would have given everything I had in those 60 minutes, even if I knew there weren’t any more after.
So when people ask me how I ended up playing 726, that’s what I tell ’em. I played every game — every single game — like it was the only one I’d ever have. That’s how I made it to this point."

As a person of colour, the hockey star stated, “He’s one of my heroes. I thought maybe wearing the number might give me Superman powers.”

Ward would have those super powers when he scored a playoff series winning goal in overtime against the defending Stanley Cup champion Boston Bruins in Game 7 of the Eastern Conference Quarterfinals.  That decisive goal prompted social media attacks with racist tweets by some so-called fans.  The Bruins organization denounced the attacks and made a statement calling the comments “classless” and ignorant.”

Ward says he was filled with a whirlwind of emotions following the goal but had his Jackie Robinson moment and “having the strength to overcome, to keep fighting and pushing.”  It was a big goal for sure and despite the ignorance of some, he did not relent.  He named his son Robinson in Jackie’s honour.

He also believes all NHL teams should retire No. 22, the number worn by Willie O’Ree of the Boston Bruins who was the first black player in the league when he made his debut on January 18, 1958.  Major League Baseball retired Robinson’s number in 1997. 22 was his number with UPEI.

Joel Ward played his last NHL game with the Sharks and finished with 133 goals, 171 points and 304 points. His perseverance and desire paid off.

He only wanted to play in one NHL game. 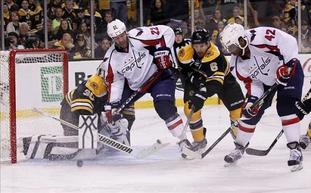 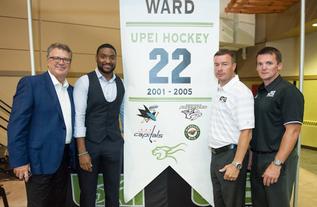 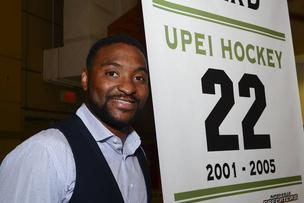 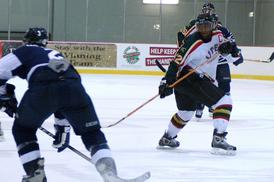 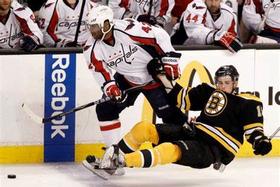 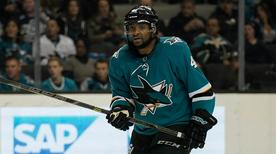 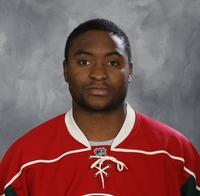 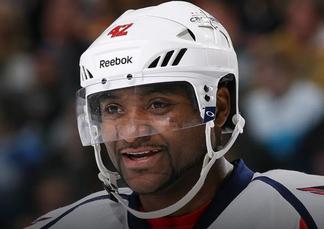 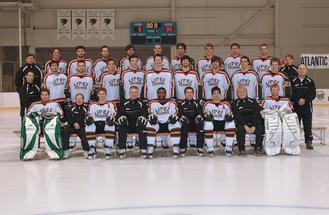