Pete Kelly played in 177 NHL games with four teams over seven seasons with 21 goals, 38 assists and 59 points in total. He had 3 goals, 1 assist for 4 points in 19 playoff games. Kelly scored the Stanley Cup winner against Toronto in 1936 for Detroit.

Pete Kelly scored the Stanley Cup game winning goal on April 11, 1936 against the Toronto Maple Leafs in Detroit's 3-2 victory in the clincher - but still was scolded for jumping on the ice without Coach Jack Adam's permission. 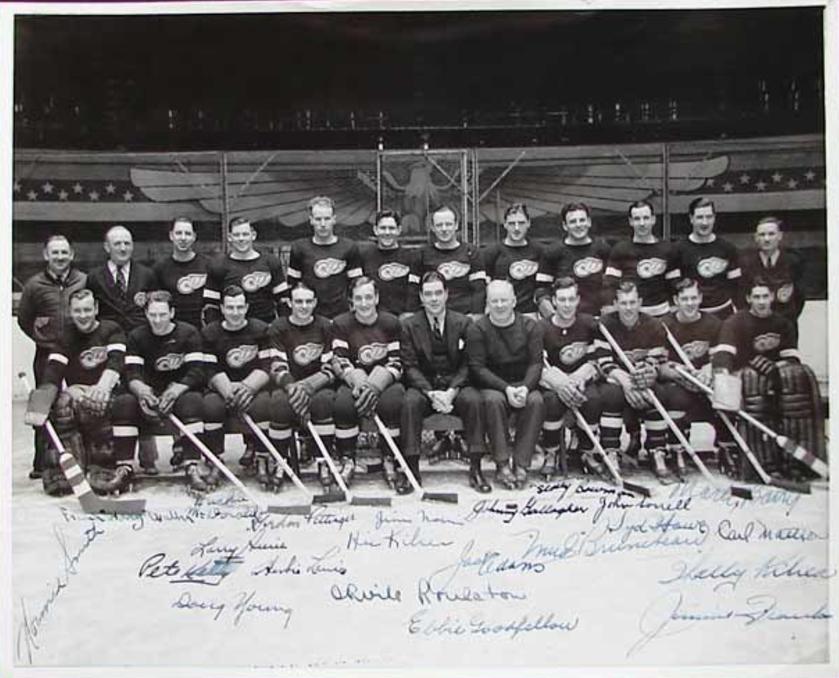 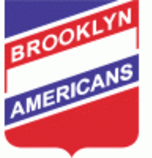 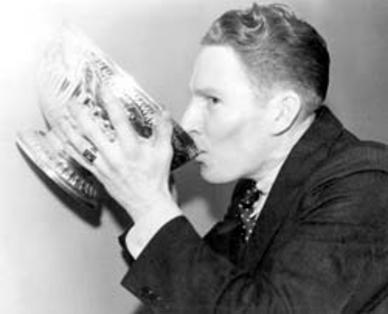 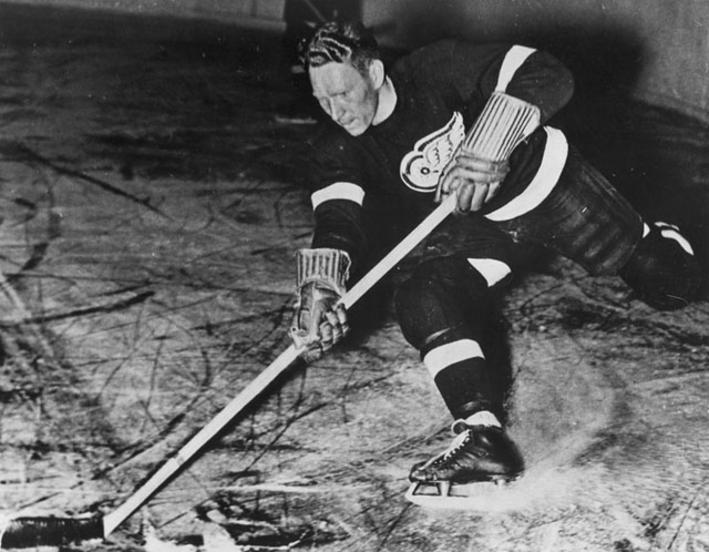 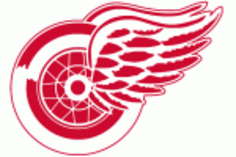 You might say Pete Kelly was in the right place at the right time in the mid 1930’s.  The highly touted right winger found himself in the middle of turbulent times in both the amateur and pro ranks and wound up playing on two Stanley Cup champions in Detroit in 1936 and again in 1937 as a result.

Peter J. “Pete” Kelly was born in Winnipeg, Manitoba on May 22, 1913.  He was the youngest of four brothers and grew up playing hockey in the west. He played junior hockey in Montreal starting at the age of 16 and joined the Charlottetown Abegweits when he was 20 in the Maritime Senior Hockey League in 1933-34. He had 14 goals, 11 assists and 25 points in 39 games that season along with 67 minutes in penalties. The Abbies were part of the Big Four in the Maritimes. One of Kelly’s team mates was Ivan “Hickey” Nicholson who would go on for a successful pro career. Another member on the team was Jack “Hurry” Kane who went on to become an influential coach in Island hockey. The following season, in January, 1935 the Canadian Amateur Hockey Association issued an order that declared several Abbies players would be ineligible for the Allan Cup playoffs. This came after the Moncton Hawks won the Canadian senior hockey title in 1933 and 1934 with a team stacked with imported players. This caused the CAHA great embarrassment as the governing body could not take any of the teams in the Maritimes to task despite eleven players claimed to be making $75 a week which went against the CAHA rule (apart from the residency rule the CAHA also did not allow players to receive financial remuneration for their hockey services).  Kelly and three other team mates on the Charlottetown roster were told they could not participate in the post season.  This came about with the Abbies leading the league and Kelly leading the team in points (he had 16 goals, 11 assists and 27 points in 20 games). Kelly decided to leave in light of a very uncertain situation and joined the NHL’s St. Louis Eagles in January, 1935 where he scored three times and added 10 assists for 13 points in 25 games. Kelly been recruited by the Abbies and signed in May, 1933 and played a season and a half before departing.

The 5-11, 170 pound right wing went on to play seven seasons in the NHL but his time with the St. Louis hockey club was also short lived.  The Eagles were originally the famed Ottawa Senators who struggled financially and folded after the 1931-32 season playing in the smallest city in the league and at the start of the Great Depression when money was scarce. Eventually the franchise moved to the more lucrative city of St. Louis but also faced despair in only one season. The owners asked the league to suspend operations and moved the team back to Ottawa. The league said no to the request in October, 1935 and bought out the franchise and player contracts for $40,000 and suspended the operation. A player dispersal draft was arranged although the Chicago Black Hawks refused to take part. Kelly, who had signed as a free agent in November, 1934 in St. Louis, was claimed by the New York Americans during the dispersal draft on October 15 and was traded the next day to the Detroit Red Wings for Carl Voss who also had gone in the draft.

This turned out to be a stroke of good luck for Kelly who had 6 goals and 8 assists for 14 points in 46 games for the Wings in his second season wearing #15 on the back of his jersey. Kelly played on the checking line. His only playoff goal turned out to be the game winner at Maple Leaf Gardens in Toronto as Detroit won the Stanley Cup for the first time in four games on April 11, 1936.  The Wings led the series, 2-1 and were tied 2-2 when Herbie Lewis fed a pass to Kelly, who just came off the bench and onto the ice and beat Leaf goalie George Hainsworth – a goal that gave Detroit the Stanley Cup. Kelly later got a scolding from Wings infamous Coach and General Manager Jack Adams who had been talking to another player on the bench when an over eager Kelly who jumped on the ice to replace a tired Larry Aurie at the end of a shift.  Jolly Jack was not happy at all with his 22 year old rookie.  The goal stood up as the winner but Adams scolded his player when he came back to the bench because he had not sent him out. “He still gave him hell when he got back to the bench,” said hockey historian Bob Duff in the Hockey News. Adams later loosened up as he sipped some champagne from the Cup in the dressing room.

"This was our first Stanley Cup," Kelly said. "And then we repeated the next year."
And so, Detroit became fixated on hockey and the Red Wings.
"I give all my respect to our old fans," Kelly said. "They took it like the Red Wings fans today. And when we'd win, boy oh boy, it was sweet."

1935-36 was a big year in sports for Detroit. The Tigers won the World Series, the Lions the NFL championship and the Red Wings won the NHL title.  Jack Adam is one of the few to have his engraved on the Stanley Cup as a player, coach and general manager.

The 1936 playoffs also produced the longest game in NHL history. Another Manitoba native, Mud Bruneteau ended the longest game ever by scoring a 16.30 of the sixth overtime period as the Red Wings blanked the Montreal Maroons, 1-0 in the opening game of the semi-finals in Montreal. The contest lasted 176.30 minutes. Bruneteau beat Maroons goalie Lorne Chabot on the Wings 67th shot of the night.  At the other end of the ice, Detroit goalie Norm Smith made 90 saves.  Coach Adams had hot tea served to the players between overtime periods to keep them alert. Team mate Pete Kelly watched as the puck shot by Bruneteau that went in and allowed everyone to go home to bed. The game ended at 2.25 in the morning.

The following season was a repeat for the Red Wings.  Kelly had 5 goals, 4 assists and 9 points in 47 games and added two goals in the playoffs. Detroit won the Stanley Cup, 3-2 over the New York Rangers in a five game series.  He played in just 9 games in 1937-38 and picked up an assist before being sold for cash to the Pittsburgh Hornets where he played on a line with Islanders Harry Currie and Windy Steele.  He was traded again in 1940-41 to the New York Americans and the next with the Brooklyn Americans in the NHL.  Kelly wound up playing in 177 NHL games scoring 21 times, adding 38 assists for 59 points and only 68 minutes in penalties.

He was the AHL scoring champ in 1941-42 with 33 goals, 44 assists and 77 points playing in 46 games for Springfield.  That year he made the first all-star team. The 77 points set a league record that season.

During World War II he was supervisor for the YMCA War Service serving in Canada and England.  He played for the Moncton RCAF Flyers and later the Charlottetown All-Stars and Charlottetown #2 as he returned to amateur hockey.  Kelly played two more years after the War with the New Glasgow Bombers in the Nova Scotia senior league before heading to the University of New Brunswick where his career would be extended as player and then coach and athletic director starting at the age of 34.

The Manitoba native married an Island girl, Peggy Hobbs in 1936.  He met her while playing for the Charlottetown Abbies. Kelly was considered a Maritimer because of his long affiliation with the East Coast and living and playing or coaching hockey in all three Maritime  provinces.  His stay in Fredericton at the University of New Brunwick would be a long tenure and a successful one that spanned four decades.  Kelly coached the UNB Red Devils hockey team from 1947-48 to 1967-68 winning three Maritime titles in 1960, 1966, and 1964 and bronze medal at the Nationals in 1964. As coach he was both inspirational and motivating but also demanding of his players to give their best. He was Athletic Director at UNB from1947 to 1973.  In 1985 the AUAA named the east division of the conference after him, the Kelly Division. The west division was also named after A.J. MacAdam of the St. Dunstan’s Saints, the MacAdam Division.

Pete Kelly was also a great amateur and professional golfer winning numerous titles. He was a member at the Belvedere Golf Club in Charlottetown and later in Fredericton. He was a three time Maritime Amateur Champion, a four time New Brunswick-PEI amateur champ and played on eight Willingdon Cup teams representing PEI and New Brunswick. He was inducted into the Fredericton Golf Club Wall of Fame in 1978.  He was also named a member of the New Brunswick Sports Hall of Fame in 1978, the Manitoba Sports Hall of Fame in 1989 and the Fredericton Sports Hall of Fame in 1992.  He is also recognized by the Alumni Association at UNB. Kelly was given a retirement dinner at the university in May, 1973 and was honoured again in November, 1999 in a pre-game ceremony before a UNB-St. Thomas contest. An exhibition series named the Kelly Cup is played each year at UNB at the Aitken University Centre and named in his memory.  The host Reds play another university in the two game series which falls during the Christmas break.

Pete Kelly passed away in Fredericton on March 22, 2004 just two months before his 91st birthday.  Interment took place in the People’s Cemetery in Charlottetown in the family plot.  70 years previous the talented Kelly had arrived in the Island capital to begin his long and illustrious hockey career that included two Stanley Cups and a lifetime of memories.