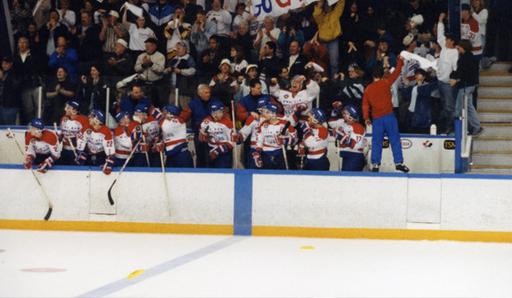 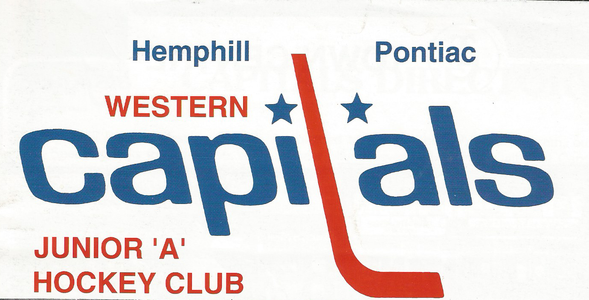 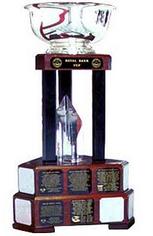 Celebration time! The Caps embrace goalie Harlin Hayes who made 89 saves in the last two games 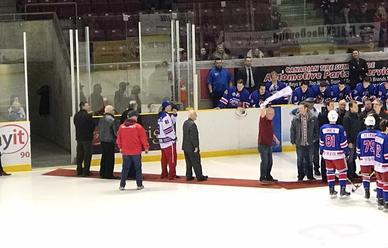 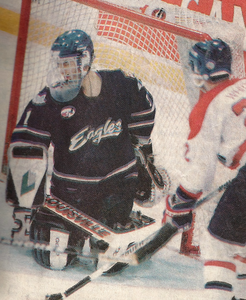 Sunday, February 12, 2017 was a special night for over 15 members of the 1996-97 Royal Bank Cup Champion Summerside Western Capitals.  They were treated to a recognition night and reunion at Credit Union Place that was put on by PEI Sports Hall of Fame and D Alex MacDonald Summerside Western Capitals prior to their game with the Yarmouth Mariners.

On hand for pre-game ceremonies were: 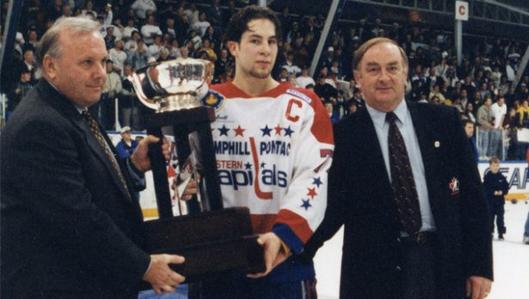 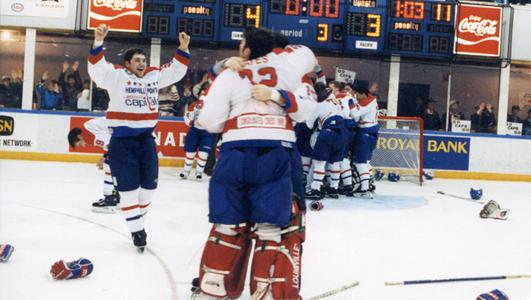 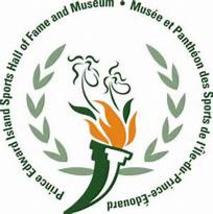 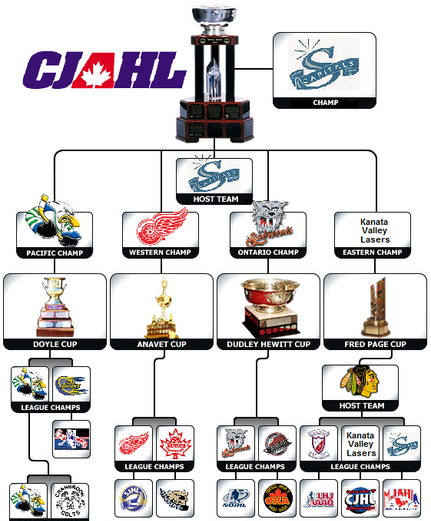 Gerard Gallant went from being a player to a coach in the 1995-96 season as he joined the Summerside Western Capitals following a career ending back injury playing for the minor league Detroit Vipers. Gallant was just in his early thirties as a new part of his hockey career was unfolding. Back surgery in 1991 ended his outstanding career with the Detroit Red Wings. A further back injury in November, 1995 while playing in the International League at age 32, signalled the end of the line for the rugged winger. Turk went home and accepted the coaching reigns of the local Junior “A” team. Gallant’s coaching career would take off right away as the Capitals hosted and won the Royal Bank Cup in the spring of 1997.

The Dartmouth Oland Exports defeated the Moncton Beavers to win the ’95-96 Martime Jr. “A” Hockey League championship. The Capitals finished fifth with a 28-24-2 record.

The 1996-97 MJAHL season would be an interesting one with the Caps hosting the Royal Bank Cup national junior tournament in May. Ten teams started the campaign that included the expansion Cape Breton Islanders and Restigouche River Rats who were based in Campbellton, New Brunswick. They would join Amherst, Antigonish, East Hants, Dartmouth, Moncton, Saint John, Charlottetown and Summerside with each team playing in a 54 game schedule.  Saint John folded in January citing financial problems. The Western Capitals, under Head Coach Gerard Gallant completed the regular season with a 35-14-6 mark for 76 points and 21 points of ahead of Moncton in the division race. The Caps defeated Restigouche in the first round of the playoffs and then went to a seventh game to eliminate the Charlottetown Abbies in a battle royal with their provincial rivals.  The Caps won 4-3 despite trailing 3-1 after the first four games. Jeremy Pierce keyed the victory in  a memorable series that gripped Island hockey fans in the spring of ’97 with plenty of drama. Goalie Jason Gallant backstopped the Capitals in the nets as the team came was starting to come together. Summerside met Dartmouth in the league final for the Callaghan Cup. That set went a full seven and the Caps won 4-3. Summerside advanced to the Fred Page Cup tournament for the Eastern Canadian Championship in Brockville, Ontario where they stumbled and went 0-3. To be fair to the Caps they had played in two gruelling, physical series that went the distance in the Maritime playoffs and were banged up heading into the Fred Page.  Kanata Valley Lasers won the tourney as they beat Longueuil College de Francais in the final.

The Summerside Western Capitals were out to make history as the first Atlantic Canadian team to win the Canadian Tier II championship. Summerside had finished as runner-up in 1989 a tournament the city hosted for the first time. Cole Harbour lost to Penticton, B.C. in 1986 bowing 7-4. Prince Albert emerged as champs in 1979, edging the Sherwood-Parkdale Metros, 5-3 in overtime. The Vernon Vipers of B.C. won the inaugural Royal Bank Cup, which took over from the Centennial Cup, as they blanked host Melfort, Saskatchewan, 2-0.

The second Royal Bank Cup would be held in Cahill Stadium, May 3-11, 1997.  Weyburn skated past Kanata, the Fred Page champs, 7-3 in the opener, Summerside skated past the Rayside-Balfour Sabrecats, the Northern Ontario champions, 5-1. The South Surrey Eagles of B.C. dumped Rayside-Balfour, 5-2. South Surrey included future NHL star Scott Gomez.  As the week continued, Kanata improved to 2-0 with a 7-5 victory facing the Capitals. Weyburn walloped Summerside, 8-2.   Kanata then handed Rayside-Balfour a 5-4 setback. South Surrey got by Weyburn, 5-4 in overtime.  South Surrey then handed the hosts a third straight loss, 3-2 in overtime. Summerside needed some help to make the playoff round. They got it when Weyburn blanked winless Rayside-Balfour, 7-0. Kanata took second place in the tournament behind Weyburn with a 7-6 edging of South Surrey to finish the round robin.

Weyburn took first place in the tournament standings with their opening night win over Kanata. The Lasers claimed second resulting from their 7-6 win over the Surrey Eagles. All three teams were 3-1. Summerside was fourth with a 1-3 mark and Rayside-Balfour finished 0-4.

Summerside faced another uphill climb in the playoff season but had comeback down 3-1 to the Abbies and won three straight in the Maritime playoffs and also went to a seventh game with Dartmouth before losing all three contests in the Fred Page. The Caps had their doubters entering the semi-finals with a combined 9-12 playoff record in their past 21 contests. The Caps battle their way back against the Abbies, came back down 3-2 to Dartmouth and despite the 0-3 mark in the Fred Page and three straight losses after an initial win in the Royal Bank, they made the semi-finals.

The players banded together through the motivation of Coach Gerard Gallant upended the tourney leading Weyburn Red Wings, 4-3 in double overtime. Mike White scored the game winner set up by Mark White.  South Surrey did away with Kanata in the other semi-final doubling the Lasers, 4-2.

That set the stage for the final game on Sunday, May 11th. It turned into a classic as the battered and bruised Hemphill Pontiac Western Capitals came to play and beat South Surrey, 4-3.  The weary, battle-worn Caps included James Chalmers who had tonsillitis and could barely breathe but found the net for the winner. Steve Dyer skated and provided two key goals in the playoff round despite his aches and pains. Stacy Smallman suffering from a hip injury managed to skate despite the pain.  Jeremy Pierce could not suit up for the final due to a rib injury  The Caps prevailed, 4-3 with goalie Harlin Hayes making 54  saves. He came up with 89 stops in total for the weekend in the pair of 4-3 victories.

Here’s how it went down as the Capitals became the first Atlantic team to win the Canadian Jr. “A” title.

Sunday, May 11, 1997 -   2,111 fans jammed into Cahill Stadium to watch the final game of the Royal Bank Cup. The Caps came into the game as underdogs despite the fact they had home ice. That status didn’t bother the head coach or the players who knew they had put up a strong battle despite losing 3-2 in overtime to South Surrey in the round robin.

The Eagles grabbed an early 2-0 lead as Dan Vandermeer scored at 1.09 and Jakub Ficenec who was set up by  Scott Gomez, made it 2-0 at 6.05. James Chalmers scored an important goal for the Caps at 10.41 in the opening period to cut the deficit in half, despite his sore throat. South Surrey went ahead 3-1 as Vandermeer got his second of the game at 4.27 into the second. The Caps got their big break when Clay Simmons of the Eagles was sent to the penalty on a 5 minute major for high sticking Summerside’s Dan West at the 15.46 mark. Referee Norman Beck made the call after consulting with linesman Rob Newson who who actually made the call himself (the other linesman was Geoff MacDonald). Summerside capitalized on the glorious opportunity by scoring twice with the extra man during the long power play. Mike White beat goalie Peter Wishloff at 16.59 as he was set up by Mark White and Stacey Smallman. Steve Dyer tied the game set up by Mark White at the 18.48.  It was tied up, 3-3 heading to the third period.

The Eagles out shot the Caps, 22-17 in the first 40 minutes. Harlin Hayes making 19 saves. He’d come up with 16 more in a busy third as South Surrey out shot Summerside, 16-10 in final stanza. The Caps would only need one goal to complete the comeback and win the Cup. It was provided by Chalmers who pounced on rebound after an initial shot from Jan Klimes at 12.14.  The Caps held the Eagles off the scoreboard for the last 7 plus minutes and won the game, 4-3. Chalmers grabbed a rebound and placed it in the top left corner past Whishoff. Scott Gomez didn’t help matters for the Eagles as he picked up a tripping penalty with 56 seconds to go.  The clock ran down and the Summerside Western Capitals were national champs.

Hayes was named player of the game for the Caps and heard the roar of the crowd “Har-lin, Har-lin, Har-lin" making 35 saves in the contest, nearly half of them in the final period.

“These are the greatest fans in the world,” he told Guardian reporter Kevin Barrett. “They are always hooting and hollering. It keeps us pumped up as well. It’s awesome.”

Dyer, who fired a rebound in on the Caps second power play in second said he never dreamt of winning the championship although in the back of his mind he thought it might happen. “It’s unreal, indescribable,” he said in a happy and loud Caps dressing room.

Coach Gerard Gallant was proud of his banged up troops. “We won the game the same way we did the other games in this tournament and the league championship” said Gallant. “It was a lot of guts and determination and never quit.”

Gallant had a good staff with him in assistant coaches Jeff Squires and Ivan Baglole and brother Blaine Gallant, the team trainer and biggest cheerleader.

Tournament Chair Bill Schurman says the Royal Bank Cup was a successs despite some fans opposing a $10 admission fee which led to lower crowds in the early going. Hundreds of fans lined up at the Cahill Stadium box office before tickets went on sale at 3 p.m.

The fans were loud and fully supportive of the local heroes. Mike White, the overtime hero from the semi-final, thanked the Caps supporters. “I can’t express how those fans get you into a game, “He stated. “You can come to the rink and you might not want to play but as soon as you hear these fans, you are giving your all.”

The Caps gave it their all plus some as they captured the Royal Bank Cup. It was a first for PEI. 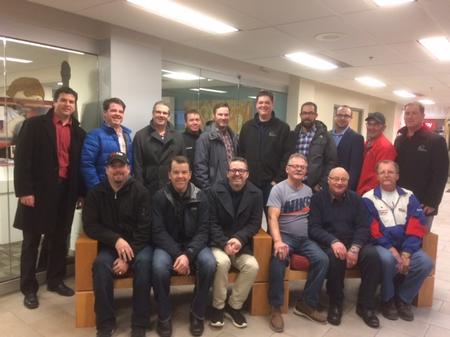 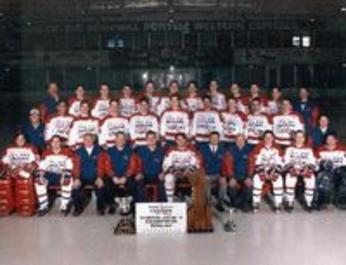