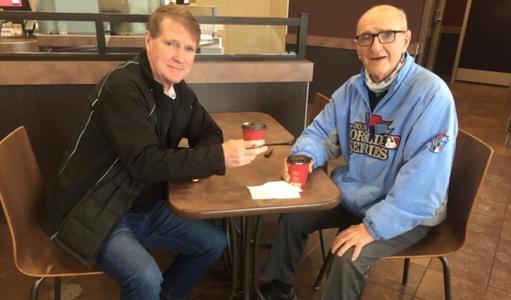 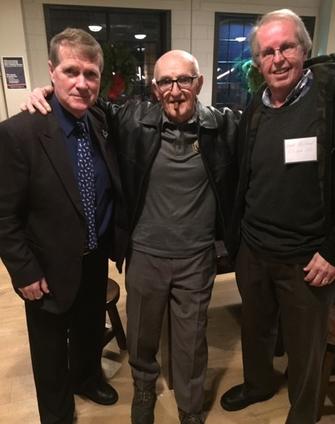 The 234-page soft cover book is available online at retromedia.ca. Forbie is also available at the Bookmark, Indigo and Beaconsfield Historic House in Charlottetown, Coles in Summerside and Tim Hortons restaurants across Prince Edward Island. The book retails for $34.95.

The Summerside Boys and Girls Club will benefit from all book sales of “Forbie.” A cheque for $4,000 was presented to Club executive director Adam Binkley on the night of the launch.  Forbie has always helped the Boys and Girls Club appearing in their annual golf tournament and celebrity dinner. The Club opened the Consolidated Credit Union Youth Engagement in 2016 near the club’s home.   $1-million renovation of its main site is underway. The Canadian Armed Forces are a partner in the project for the non-profit organization and the work should be completed in February.  A special room will open on the main floor called the “Forbie Kennedy Homework Heroes Educational Centre.”

A ribbon cutting ceremony to take place on July 15, 2019 during the Summerside Boys and Girls Club annual celebrity golf tournament.Type your paragraph here. 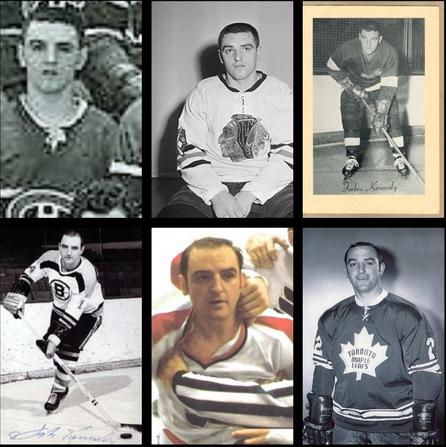 That doesn't appear to be the response you would expect from a seasoned NHL veteran who was about to have a book about himself unveiled in front of a sizable crowd but not as large as audiences he had played before in the big leagues or when he was behind the bench coaching on the Island.

Despite being the spotlight for years, going toe-to-toe with some of the best fighters in hockey and having the reputation as a tough little bandy rooster, Forbes Kennedy had to prepare himself for his big night at the PEI Brewing Company in front of family, friends, former team mates and opponents and many of his former players. The whole atmosphere had the feel of a  homecoming for a hockey hero (which of course it was in a sense).

Forbie treated it like any big game as either a player or coach. He wouldn’t eat the day of a game and his nerves would not settle until the puck was dropped. In this case the dinner had begun.

The guest of honour had to speak eventually about the new book “Forbie” which was brilliantly authored by Gary MacDougall, former managing editor of the The Guardian newspaper in Charlottetown. He did so in a question and answer period with Ron MacLean.

Forbes Kennedy for all of his years in hockey and his tough guy persona that precedes him has always been a kind, humble and proud man who really didn’t take to his own spotlight shining so brightly.

But on this night that included Hockey Night in Canada’s best story teller in MacLean, it was Forbie’s Night.

You will often hear Forbes Taylor Kennedy has a “heart of gold” many times anonymously buying a pair of skates for a kid down the street whose parents could not afford to buy them or paying for a child’s registration so they could partake in minor hockey.  So, it was only fitting that part of the proceeds from the book would go to the Summerside Boys and Girls Club which helps many youngsters find a better way of life through many activities including sports.

“Forbie” was officially launched on Wednesday, November 28, 2018 at the PEI Brewing Company, a former Coca-Cola bottling warehouse that has been transformed into a spacious banquet and meeting place.

The guest of honour was overwhelmed by having a book about him.

“There are so many good hockey players on the Island, there’s others they could write a book about.” He said “ But I’m glad that they did it.”

He played when the NHL was a six team league. Only 120 players made it each year. Forbie played 12 seasons.

He was associated with all six of the original teams. His playing days were with Chicago, Detroit, Boston, Toronto and the expansion Philadelphia Flyers.

And he stuck for the most part in the 120 player league once his rookie year began in 1956.

“You couldn’t have two or three bad games in a row or you were gone. You had to give everything you had every night. That’s the way it was.”

Forbie always gave it his all.

He began playing Junior in the Montreal Canadiens system after his minor days growing up in Charlottetown. He was traded to Chicago, then Detroit and moved on to Boston. Forbie was taken as an original Flyer in the expansion draft of 1967 and played his final few games with Toronto in 1969. The following season he wound up in the minors and his badly injured knees permitted him only 19 games in Buffalo in the AHL and 10 playoff games between the Bisons and Omaha in the CHL. He had undergone botched knee surgery and his playing days were ended.  The New York Rangers had purchased his rights and he became only the fifth player to have been property of all of the Original Six. The others were Vic Lynn, Bronco Horvath, Dave Creighton, and Larry Hillman. Lynn was the only one to actually play for all six.

Buffalo won the Calder Cup AHL championship that season under Coach Fred Shero. That was Kennedy’s only championship ring but because he didn’t play more than a few games he doesn’t wear it.

Forbie was also a standout baseball player on the Island and spent most summers on the ball field. In his first game as a starting catcher he caught a no-hitter which was fashioned by Donnie “Funnel” MacLean.

He also caught Vern Handrahan in the 50’s. Maybe the only time a future NHL player has been part of the battery in a ball game with a future MLB player.

He turned to coaching and Island fans will best remember him as the guy behind the bench in Summerside with the Crystals and Capitals and a long tenure as coach of the Charlottetown Eagles and Abbies. Both teams prospered under him. His best year was 1998-99 which included a Maritime Junior Championship and a trip to the Royal Bank Cup in Yorkton, Saskatchewan. The Abbies made it to the final game.

He coached his last four seasons with the Capitals in Summerside and retired after 2007-08 when he was 72.

Players like David Ling who were on his teams loved him. He demanded each guy play the proverbial 110% and expected no less. Ling’s playing career has mirrored much of Forbie’s inspiration and expectation- tough, hard effort each night and dedication. David Ling was still playing at age 43 in 2018-19.

There are others from the Forbie mould. They all thank their cigar chomping bench mentor for that.  Forbie for that matter gives praise to Brigadier Bill Reid and coaches Johnny Squarebriggs Sr. and Art Perry for teaching and inspiring him in the late 40’s and early 50’s.  He also had great admiration for Jack Adams who operated things in Detroit in the 50’s (his name is on the NHL coach of the year award).

On Forbie’s big night  special head table guests included Ron MacLean of Hockey Night in Canada and Rogers Hometown Hockey, Gary MacDougall, author, Jeremy Pierce, book and banquet committee manager, and title sponsor, Danny Murphy. Lee Gauthier, a former Island Jr. hockey player chaired the event.  MCee for the night was George Matthews, who played under Forbie in the early 70’s as a goalie in Summerside and went on to be the play-by-play voice of the Columbus Blue Jackets and now with the Charlottetown Islanders in the Quebec Major Jr. Hockey League.

Ron MacLean says he met Forbie through one of his sons. “Brad Richards introduced me to Gary. Within an hour I met son Mike and then daughters Donna and Carol-Ann and then I got to meet Forbie the following summer. We were at the Brad Richards golf tournament. His friend Trent Birt took me to Tim Horton’s for a coffee break and to meet him.”  And thus began the inspiration for the book.

Publisher Larry Resnitzky says the thought of doing a book on the life and times of this P.E.I. sports legend, a long-time community volunteer in hockey and baseball circles and one of a handful of NHL players to have signed with each one of the original six teams of the NHL, intrigued him from the outset.

“When Ron MacLean heard that Forbie would be the focus of the book, he offered to headline a banquet to help cover the costs of getting the book done and that finalized my decision to publish Forbie.”

The main part of the book is divided into three periods, with a Forward from Ron MacLean, Acknowledgements from the publisher and Notes from the Author and each of the Sponsors – all of whom have a love for all things “Forbie.”

Resnitzky says anyone who knows the combative on-ice player and the off-ice giant volunteer Forbe Kennedy would love this guy, his character, his storytelling charm, and his commitment to the game of hockey and the young people who play it.

Larry’s wife Nancy was editor for the book with Bill MacKendrick and Lori Mayne as assistant editors. The graphic design artist is Shannon Murray.

Research for the book included several interviews with Ron MacLean, Alex Delveccio, Eddie Johnston, Gerard Gallant (while on route to the 2017 - 2018 Stanley Cup Playoff Finals as coach of the Vegas Golden Knights) and Joe Watson — all enthusiastic in giving their support to Forbie. A number of players and hockey personalities presented greetings on the night of the launch including Watson, Gallant, Johnston, Brad Richards, Doug MacLean and others.

Author Gary MacDougall was quick to point the book was not of his own making.  “To be truthful it was not my idea. I was approached by Larry and Jeremy Pierce, who was working for the City of Charlottetown. Ron MacLean had also asked why there was no book on Forbie Kennedy,” he said. “So they approached me and I got involved with the project and it’s been a labour of love for sure.”

Forbie is a charter member of the PEI Sports Hall of Fame (1968) and went in the same year as former major league pitcher Vern Handrahan.

He continues to be an Island icon and stories about Forbie will live on forever. He was the first to make it in the NHL as far as longevity is concerned and stayed with the game as a coach after his playing days were over.  Brother Jamie played for him at Winston-Salem in the Southern Hockey League in the early 70’s and also with the Abbies as an assistant coach. Jamie was a star player in the minors in his own right and later a top notch PEI referee. Late bother Jake was also a tremendous amateur player and a referee.  Son Mike was his main assistant coach for years and often acted as a spokesman to the media after many games.

Forbie’s rock was his wife Marie who passed away in 1989. She no doubt nurtured his good side and played such an important role in raising the family.

Forbie was and still is the darling of Boston where he played from 1962 to 1966.

On a baseball trip to Fenway in 1986, then CFCY Sports Director Dave Holland met long time Boston Red Sox coach Johnny Pesky, who on finding out the reporter was  from Charlottetown stated, “Let’s talk about Forbie.”

On trips  to Charlottetown for speaking engagements the late Gordie Howe would always have one question when arriving. “How do I get in touch with Forbsie?”They were team mates and opponents and had a few tussles on the ice but both had great respect for the other.

Forbes Kennedy has made an impact where ever he went during his long career. And an impact on players and fans that followed him.

For a Good Cause 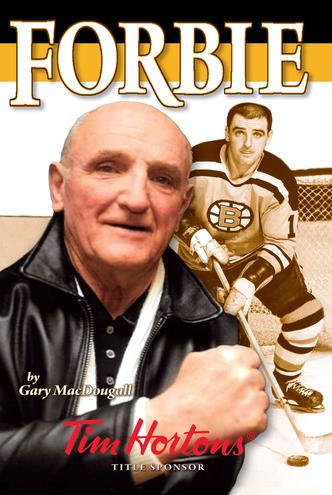 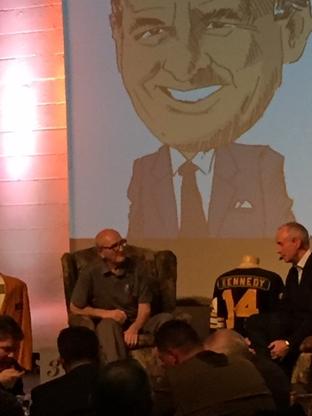 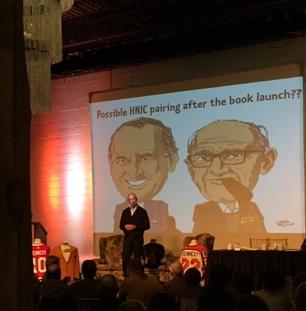 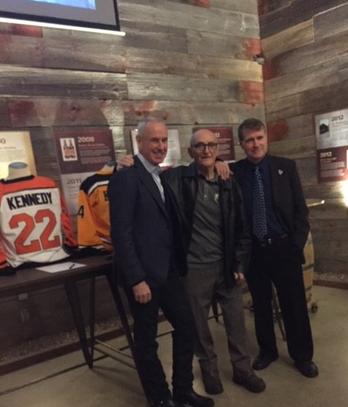 From at Hab to a Leaf 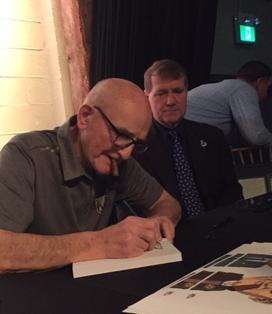 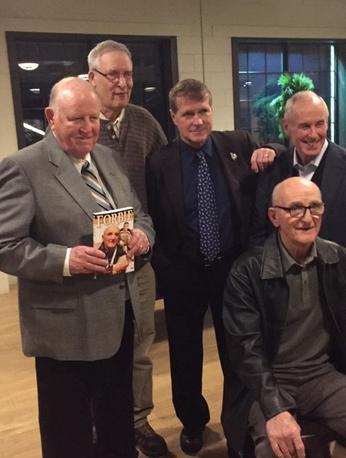