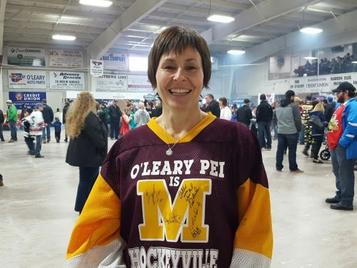 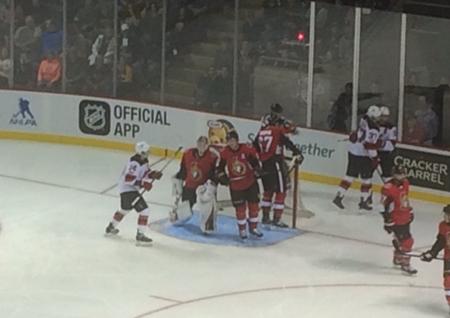 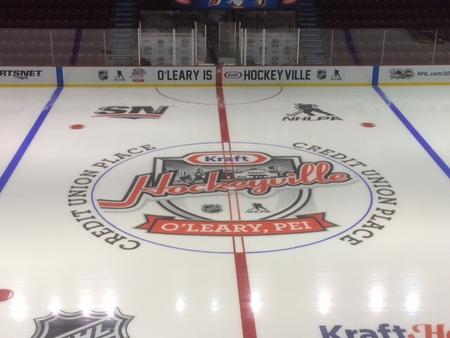 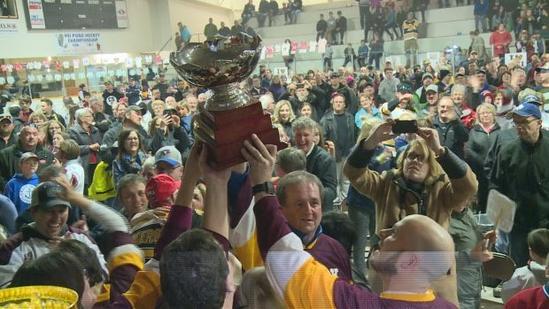 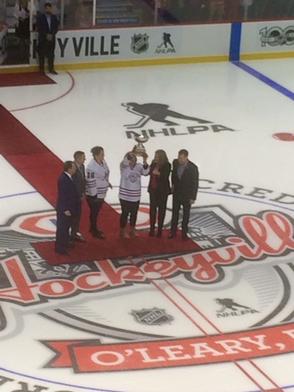 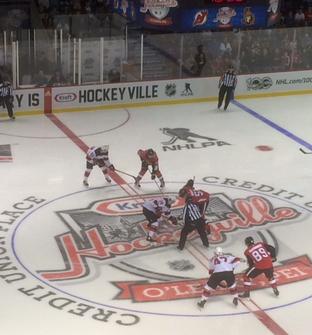 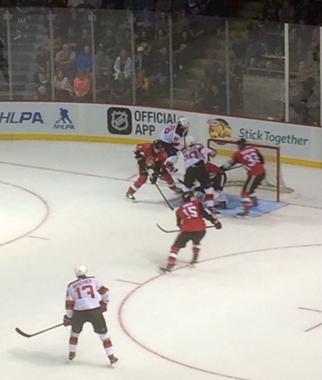 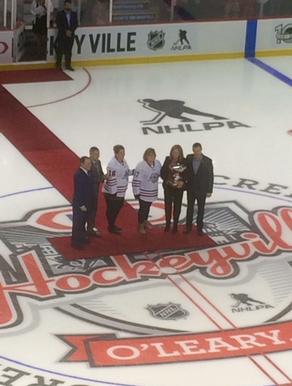 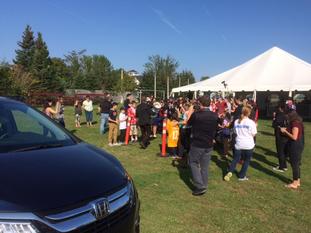 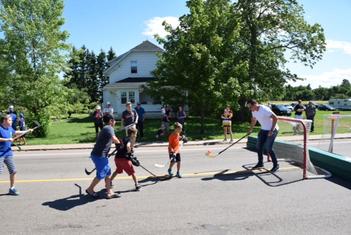 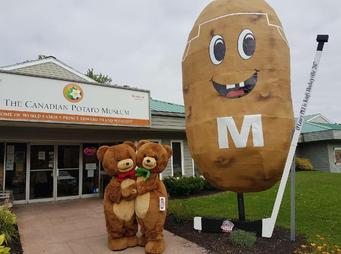 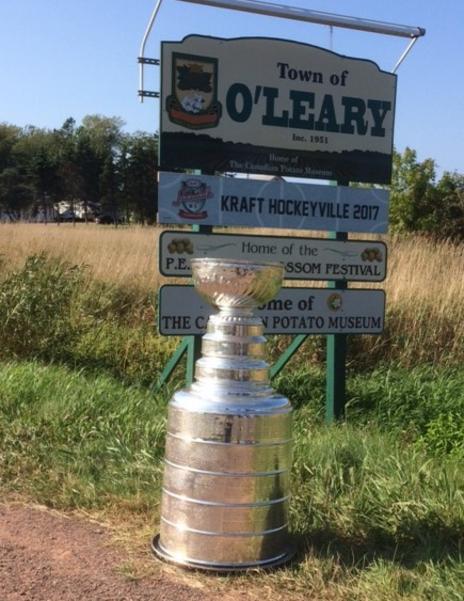 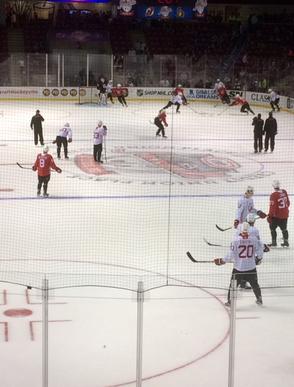 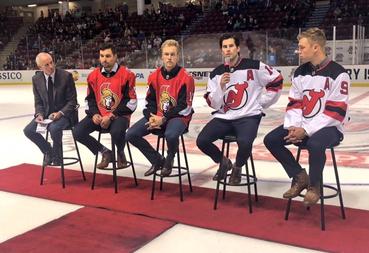 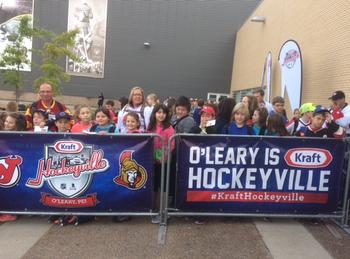 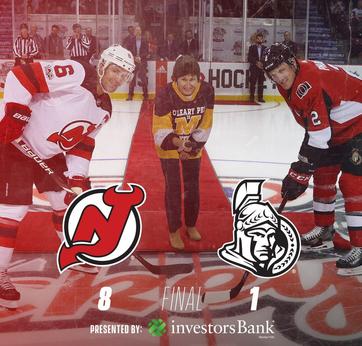 The Town of O’Leary, Prince Edward Island doesn’t quite reach 1,000 in population, in fact the town had but 815 residents in 2017 but it certainly is on the map.

Especially on the hockey map.

In 2017 the community, famous for its potatoes and Potato Museum, became Kraft Hockeyville.

O’Leary wasn’t exactly an unknown place. It had been the site of NHL Hall of Famer Eric Lindros’ first practice and scrimmage in 1992.  Lindros was the most highly touted NHL rookie since Mario Lemieux when he stepped on the ice at the O’Leary Community Recreation Centre in September, 1992. He skated with his new team mates on the Philadelphia Flyers that late summer day after an effort to get an NHL training camp paid off.  The Flyers skated in O’Leary and were entertained and played golf at the nearby Mill River Resort. The Flyers also played an intra-squad game at the new Civic Centre in Charlottetown during their week on the Island.

Twenty-five years later O’Leary brought the NHL back to the western part of Prince Edward Island. This time it would be the Ottawa Senators and the New Jersey Devils in a pre-season contest that would be played in the Eastlink Arena at Credit Union Place in Summerside.

“We actually finished as a top ten finalist in 2006 for Kraft Hockeyville,” said O’Leary hockey volunteer Billy MacKendrick who also was one of the committee members when the Flyers came in 1992. “We came up short in ’06 but we were determined to make it happen eleven years later.”

And that they did.

O’Leary is a strong community of volunteers with a passion for helping a good cause and like all Canadian towns hockey is part of the fabric of the place. If you are from O’Leary you are Maroon, the name of the most famous hockey team in the community going back to the heydays of junior and senior hockey greats in O’Leary. The maroon, gold and white uniforms with the big M in front are familiar in the western part of PEI.

O’Leary made it to the final round with a more than vigorous voting campaign that was sparked by social media and the local media and had votes coming in from all over Canada, the United States, Europe and other parts of the world.  It seems there are Islanders everywhere and they all support something that will benefit their kin on PEI, no matter what town.

O’Leary won the final vote over similar small town of Ituna, Saskatchewan.  The two were names finalists on March 18 and the winning announcement came on Hockey Night in Canada on CBC and Sportsnet on Saturday, April 1.  Kraft Hockeyville says over 2.4 million votes were cast in the final round.   O’Leary was guaranteed at least $25,000 for arena upgrades for the Community Sports Centre.  As a finalist O’Leary was guaranteed the big prize of $100,000 and regulation NHL glass around the boards plus the NHL exhibition game which was to be held on September 25.

Hundreds of residents from the surrounding community poured into the local arena and took part in an all-day party that led up to the winning announcement in front of fans young and old including many minor hockey players and their families. Their cheers were loud when O’Leary was proclaimed the victor.

“I can’t believe it, “shouted Jo-Anne Wallace, a key member on the Kraft Hockeyville committee. “It’s been just awesome. What a day! What a victory!.”

The Sport Centre, now over 25 years old, was in need of some major repairs and renovations, especially the canteen and washroom areas.  There was also a need to make the entrance to the arena more accessible for people with mobility issues.  So the funding would come in handy.

Della Sweet, who was part of the 2006 bid,  praised the committee and community for working together on the entire process including lobbying for votes and supporting the bid.

Sweet says it was surreal to see the final outcome.  “It was like watching a movie,” she said.  “I felt like I was watching everyone else – watching all of the excitement.  It overwhelmed me.”

She also was interviewed nationally on Sportsnet which was a first for her.

It was quite a happening during Canada’s 150 Celebration.

A decision was made to host the NHL exhibition game in the much larger Credit Union Place just about hour’s drive to Summerside.  A lottery was held to distribute the tickets for the game.

The weekend of September 23-24 was huge in O’Leary with the Hockeyville festival held on the grounds around the Sports Centre.   Island NHL great Doug MacLean was joined by other Sportsnet personalities that included Don Cherry and Ron MacLean.  Dion Phaneuf, who summers in Stanley Bridge, treated his Ottawa Senators team mates to a lobster dinner.

On Monday, September 25 the day of the pre-season game arrived.  School buses brought youngsters down from schools in the area around West Prince.  Ocean 100 and Hot 105.5 radio, along with CBC and the Summerside radio station Spud were on hand in the lobby of Credit Union Place. The local newspaper The Journal-Pioneer had a reporter on hand for the full day. Both the Senators and Devils practiced in the morning in front of hundreds of excited school kids and adults.  Ron and Don made their appearance with a Question and Answer period held at centre ice.

The staff at Credit Union Place and the Summerside Western Capitals Junior team provided support for the day and the game for both the Devils and Senators.

Some down time in the afternoon in Summerside before the game but the festivities continued up Highway 2 toward O’Leary with the Stanley Cup paraded to the town.  The Hockey Hall of Fame and Kraft personnel guarded Lord Stanley’s infamous trophy. There were some stops along the way including one at the Town of O’Leary welcome sign where a few pictures were taken with the Cup.  There was to be a public welcome for the Cup and a chance to get pictures taken with it in a huge tent outside the Sports Centre (it was supposed to begin at 3.00 in the afternoon but was a few minutes late in arriving as it made a stop at a few houses and businesses in the immediate area).

The fans streamed into Credit Union Place for the Hockeyville game which began at 7.00 p.m.  Prior to the contest stadium announcer Jeremy MacDonald introduced the Kraft Hockeyville volunteers who helped make it happen at centre ice. Della Sweet and Jo-Anne Wallace were among the guests. The sold out crowd cheered on.  New Jersey came out smoking and went on to romp to an 8-1 victory over Ottawa. Many in the crowd wore Senators gear (there were a few Devils fans on hand as well).  The score didn’t seem to matter.  It was just an exhibition game and the first played on PEI.  O’Leary was still celebrating as Kraft Hockeyville 2017. What an effort!

The memories of the great campaign will live on.