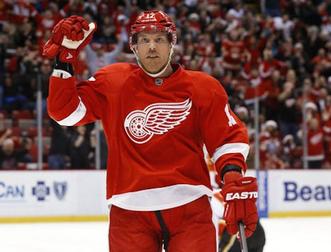 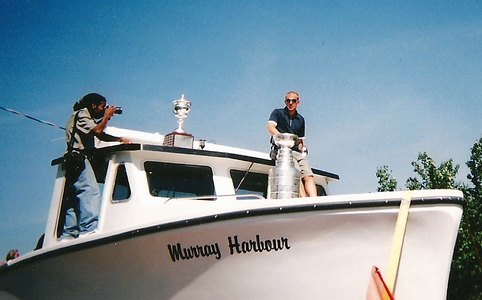 Brad Richards had a banner season in 2003-04 in Tampa Bay as the Lightning won their first Stanley Cup.  Richards played in 82 games and had 26 goals, 53 assists for 79 points and only 14 minutes in penalties which gained him the Lady Byng Trophy for ability and sportsmanship.  His playoff performance was dynamic.  12 goals, 14 assists and 26 points in 23 games and a Cup victory over the Calgary Flames that went seven games. Ruslan Fedotenko scored both Lightning goals (the first set up by Richards) in a 2-1 clincher over the Flames.  Richards won the Conn Smythe Trophy as playoff MVP where he set a record with seven game winning goals.  He was the toast of the whole province of PEI and brought the Stanley Cup home that summer to Murray Harbour  for a parade and reception that drew thousands (the village’s population  set a one day record).  His mom Delight helped in organizing the event. Brad also brought the Smythe and Byng trophies with him and allowed fans to photograph the silverware with him).

It took eleven more summers but there was another Stanley Cup Parade in Murray Harbour.  On August 4, 2015 Brad and his new family paraded the Cup down the main street in the little community and held another civic reception at the community centre.  Richards gained his second Stanley Cup ring as a veteran player with the Chicago Blackhawks who defeated his old team from Tampa Bay knocking the Lightning out in six games.  The Hawks won the final game, 2-0 as Richards assisted on goals by Duncan Keith and Patrick Kane.  That was on June 15, 2015 and a month later Richards signed his final contract with the Detroit Red Wings.

Richards was an unselfish player and a shrewd play maker. He was also a perfect passer and like most gifted players he saw the developments on the ice almost picture perfect. He was always among the best, made his team-mates better and true professional. 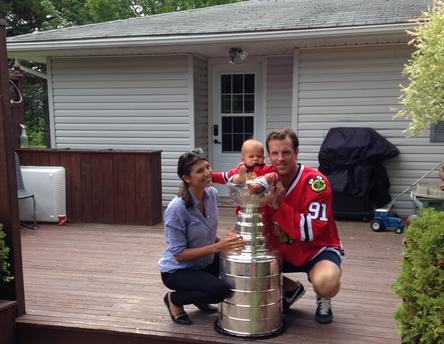 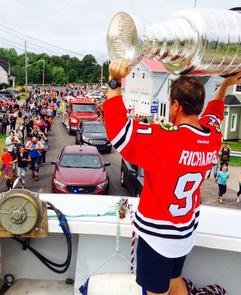 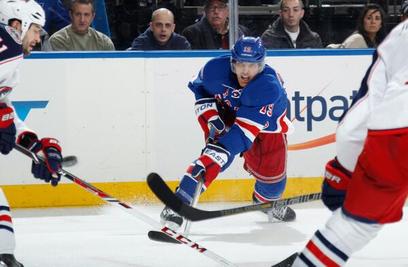 Richards has always been community minded and formed the Brad Richards Foundation.  For several years he staged the Brad Richards Celebrity Golf Tournament and Fund Raising Dinner at the Brudenell Golf Club in Brudenell, PEI which is located near Montague and Georgetown.  The event lasted six years and brought many NHL stars and personalities like Steve Stamkos and Ron MacLean to the Island (plus many more).  The tournament and dinner at the Northumberland Arena in Murray River helped raise funds for the Children’s Wish Foundation and the Autism Society of PEI.

Brad set a few milestones in his career.

He played with Team Canada in 2006 in the Winter Olympics in Turin, Italy making him an Olympian.

His five assists in a 7-4 win over Chicago in his Dallas debut set a Stars franchise record for most assists in a game.

In 2008 he had four assists tying a single game record of 4 points in one period for the Stars as they faced the San Jose Sharks.

Richards played in the 2010-11 NHL All-Star game in Raleigh, North Carolina which was hosted by the Carolina Hurricanes.  It was 58th NHL All-Star game and Richards assisted on a Steve Stamkos goal in the second period as Team Lidstrom edged Team Staal, 11-10. Richards, then with the Dallas Stars played on the winners. 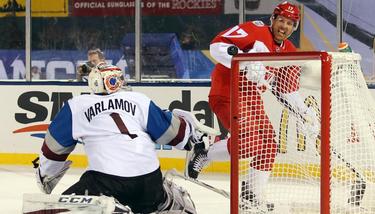 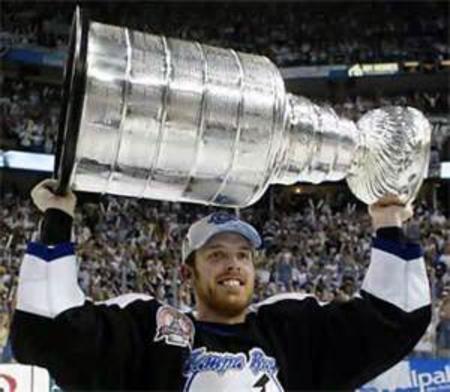 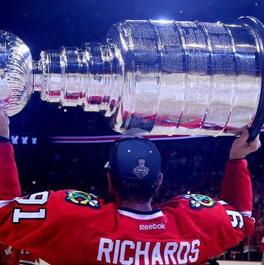 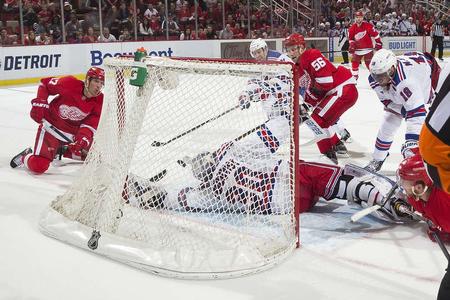 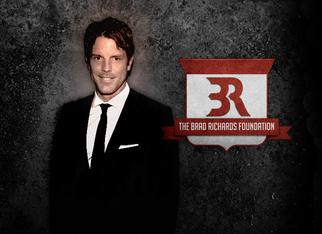 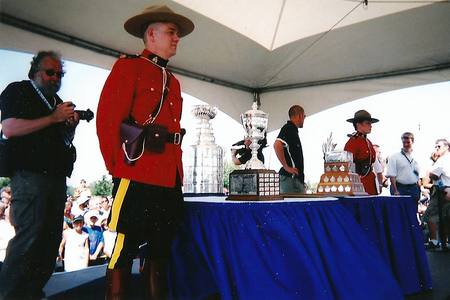 Brad Richards has the distinction of being the only Islander to win both a Memorial Cup and two Stanley Cup rings during his career. The Murray Harbour native is the all-time leader in goals, assists and points among PEI pro hockey players and at one point was among the highest paid players in the game.

Born on May 2, 1980 to Glenn and Delight  Richards and grew up in the tiny fishing village of Murray Harbour in the Island’s eastern end.  His father was a former Junior “A” goaltender in Montague and Charlottetown. Brad played his minor hockey at the Northumberland Arena in nearby Murray River.  He was drafted by the Rimouski Oceanic of the Quebec Major Jr. Hockey League, seventh overall in the first round in 1997. The six players taken ahead of him included Margate, PEI’s Morgan Warren who went second overall and picked by the Moncton Wildcats.  The third pick was Mike Ribeiro, who like Richards would go on for a productive NHL career. Ribeiro was selected by Montreal.  The 17-year old Richards played for the Notre Dame Hounds of Wilcox, Saskatchewan in the SJHL along with team-mate and close friend Vincent Lecavalier who was chosen by Rimouski the previous season in 1996. The two would team up for the next few years playing on the Memorial Cup champion Oceanic in 2000 and just four years later in Tampa, Florida with the Stanley Cup champion Lightning.

Richards made an immediate impact with Rimouski scoring 33 goals plus 82 assists for 115 points in 1997-98. He was selected in the third round of the NHL entry draft that summer by Tampa Bay. He was the 64th pick overall.  Richards along with Lecavalier and another Islander, Thatcher Bell went on to lead the Oceanic to a Quebec Major Jr. and Memorial Cup title in the spring of 2000 in Halifax. Richards was the Memorial Cup MVP that year. He was also the player of the year in the CHL with 71 goals, 115 assists and 186 points in 63 games. His playoff performance was just as impressive.  Richards had 13 goals, 24 assists and 37 points in just 12 games.

The 6 foot, 200 pound centre made his mark immediately in the NHL where he had 21 goals, 41 assists and 62 points in 82 games with the Lightning.  Over the next number of seasons he’d be on one of the most prolific scoring lines in the league with Lecavalier and Martin St. Louis on his wings.  That forward unit would guide Tampa Bay to a Stanley Cup in just four seasons.

Richards spent seven seasons on Florida’s Gulf Coast until a blockbuster trade that sent him to Dallas in 2008.  It would have been eight seasons except for the 2004 lockout where he played a few games in Russia (with Kazan AK-Bars).  He spent most of the next three years with the Stars until signing with the New York Rangers in 2011-12 and playing in the Big Apple for three seasons and getting to the Stanley Cup final in the last year. It should be noted that partially due to Brad Richards the City of Charlottetown managed to land the first week of the Dallas Stars training camp at the CARI Complex (now the Bell Aliant Centre) in September of 2011 on the UPEI campus.  Minus number 91 (Richards wore #19 in Tampa and #91 in Dallas) who was headed to the Rangers camp.

Richards joined the Chicago Blackhawks in 2014-15 where he won his second Stanley Cup ring.  His final season was in 2015-16 in Detroit with the Red Wings where he finished with 10 goals, 18 assists and 28 points in 68 games while wearing #17 in honour of Forbie Kennedy and Gerard Gallant who wore the same number with the Wings.  His 1,126 regular season games are the most played by any PEI player in the NHL. He’s also first in the other major scoring categories.  298 goals, 634 assists, 932 points. (Technically Rick Vaive had more goals with 441 but he was born in Ottawa although spent most of minor hockey years in Charlottetown).  Richards had ten 20 goal seasons, his best being 28 in 2010-11 with Dallas. His best point total was 91 and that happened twice, 2005-06 in Tampa and 2009-10 in Dallas. The soft spoken Richards rarely ruffled any feathers both on and off the ice.  He did stand with the NHLPA when collective bargaining agreements were being banged out and he and his agent Pat Morris both went after the best possible contract when negotiations with the clubs he played for arose. Richards retired after the 2015-16 season after marrying his wife Rechelle in Hawaii. The couple have a son, Luca and a new daughter. 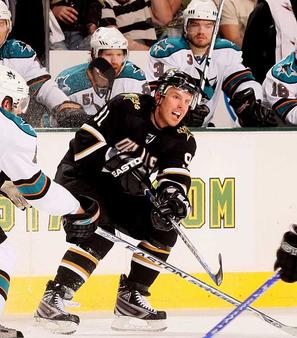 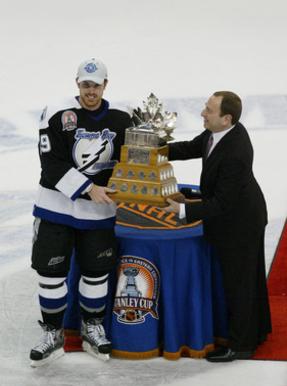