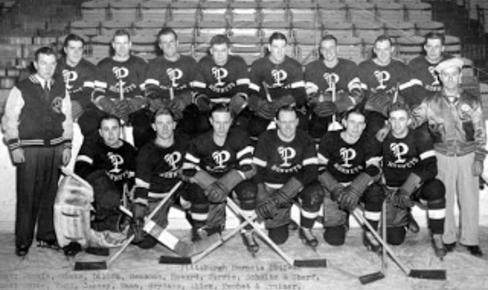 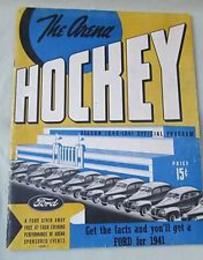 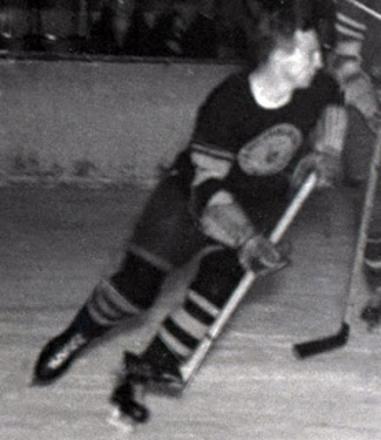 He wasn’t the biggest player to hit the ice, but he was crafty and talented.

Meet Harry Currie, a 5 ‘7” centre who weighed  176 pounds, a right handed shooter who would set an American Hockey League scoring streak record  with the Pittsburgh Hornets.  Currie was born in 1915 and played his junior hockey in Charlottetown. Two of those teams turned out to be Maritime Champions including the 1930-31 Levin Fur Company Silver Foxes. Fox farming or ranching was a big industry on Prince Edward Island at the time.  The coach was Fred Moore, who led the Foxes to the first Maritime Junior Championship with a 6-0 victory in a sudden death game over Moncton in the Moncton Stadium.

In 1933-34 Currie was a member of the Charlottetown Abegweit Juniors that became the first PEI team to go beyond winning just the Maritime Championship.  Charlottetown won the regional title defeating Halifax and then stunned the Montreal Cranes to win the Quebec-Maritime crown.  The Abbies next test would be the powerful St. Michal’s College Majors in a series that would determine the eastern finalists for the Memorial Cup. Harry Currie and team mates who included Windy Steele and George Whitlock, among others. In the early 30’s team only had ten players on their roster, which meant a lot of ice time for each individual. 1933-34 also saw a major rule change with the forward pass allowed for the first time in organized hockey. The new rule would be a benefit for St. Mike’s, a team that would see each member advance to a National Hockey League career. The Majors included the likes of Bobby Bauer, Art Jackson, and Nick Metz.  Using the forward pass, St. Mike’s who hosted a two-game, total point series at the Maple Leaf Gardens (the Abbies were the first Island team to play in the historic building). The outcome was not pretty.  The Majors outscored the Abbies, 19-5 and advanced to play in the Memorial Cup final, which they also won over Edmonton. Gordon Stewart, another member of the Abbies, says they were overwhelmed by the huge crowds of 12,000 and 14,000 at the Gardens.

Harry Currie graduated to the senior ranks in 1934-35 and played on the Charlottetown Abbies senior team that lost the Maritime title to the Halifax Wolverines.  Johnny Squarebriggs and Windy Steele were among his team mates.   The following winter, Currie began his career in the U.S. joining the Hershey Bears of the EHL in 1935-36 and 1936-37.  Currie entered the history books scoring the winning goal for the Bears as they opened the new Hershey Sports Center, scoring the winning goal late in the second period in a 3-2 victory over their rivals, the New York Rovers.  The Bears finished second in his rookie year and in first place the following season.  One of his line mates in Hershey was Gus Mancuso, who would have a short NHL stint with the Montreal Canadiens and New York Rangers.

Currie moved to the AHL in 1937-38 with the Pittsburgh Hornets and then was dealt to the Cleveland Barons.  He had 7 goals and 8 assists in 44 games in his debut in the American League.  The centre man played just 19 games the following season and was sent to Springfield where he played just four games before being dealt again, back to the Pittsburgh Hornets. Currie would stick with the club over the next five years.

The Hornets were a farm club of the Detroit Red Wings and one of Currie’s line mates would be Pete Kelly, who he played with in Charlottetown.  Kelly had played the previous two seasons with Red Wings.  The player-coach of the Hornets was Larry Aurie, another former player with Detroit.  The Providence Reds defeated the Hornets 3-0 to win the Calder Cup in 1939-40, in Currie’s first full year in Pittsburgh. In 1940-41, Currie was part of the “Spud Line” with Pete Kelly and Windy Steele.  Currie wore  number 7, 9 and 14 during his playing days in Pittsburgh. 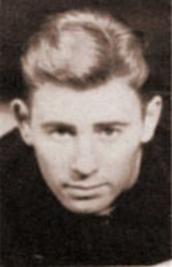 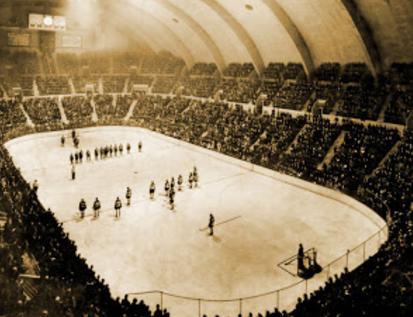