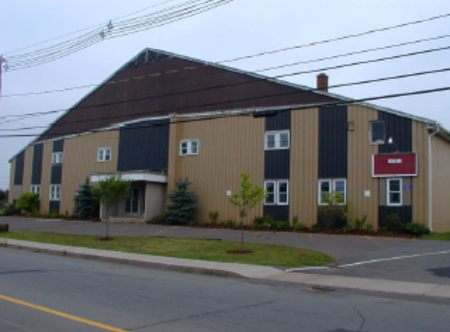 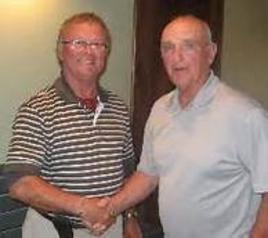 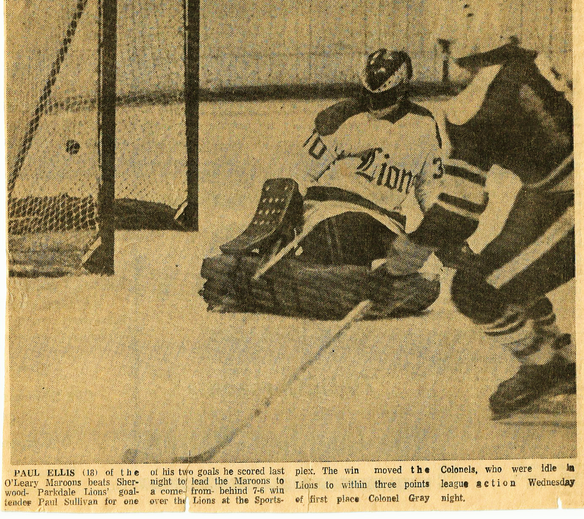 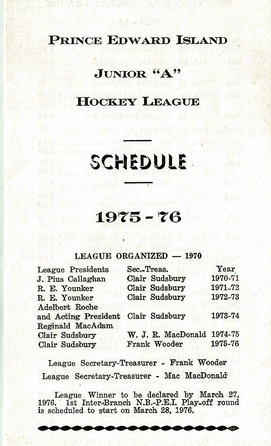 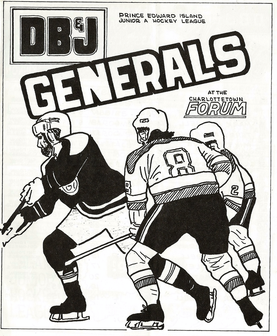 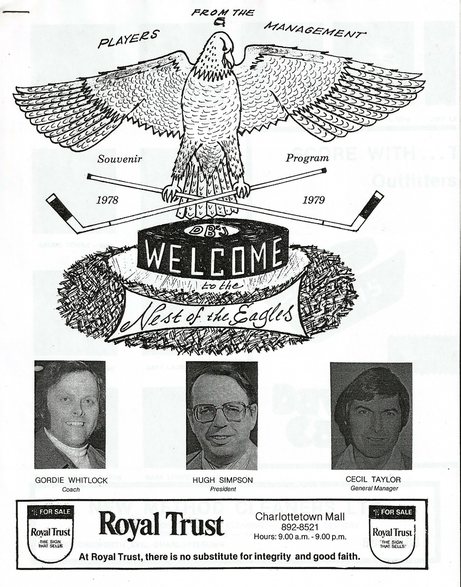 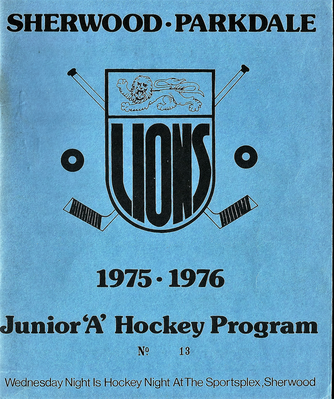 Robert Harris, Gene Kelly & Mickey Callaghan played on the most potent line in the IJHL in the mid-70's with the O'Leary Maroons

Travel was essential but not very comfortable in the 1970’s for players who toiled in the Island Junior Hockey League. The mode of transporting players was usually school buses, sometimes vans and in the case of the 70’s Abbies, Sandy Frizzell’s old bus (a passenger bus from the 60’s) which had no lights inside but some cleverly placed candles for night trips.  The bus was a rental and used by senior and junior teams for several years. General Manager Pat Gaudet of the Abbies assumed the role of bus driver as part of his duties on Sandy’s bus. Equipment was stored at the back or beside the seats. There was no washroom on board so players had to take part in the “pee patrol” by the side of the bus and in the ditch along the highway when they needed to use the facilities. Trips to Summerside or O’Leary would begin at the rink after school for the drive up west.  No smart phones or tablets back in those days and no movies were provided on a screen at the front of the bus like today, so players either did homework, talked with their team-mates or listened to music using headphones form their cassette players.  Post-game meals were rare. The odd flat tire or mechanical problem would make for a longer trip but it was a means to get to and from away games and travel time was usually lasted no more than an hour or so.

The Island Junior League lasted just over twenty years beginning in 1970-71 with the Summerside Crystals winning their first of two league championships under Coach Forbie Kennedy, who retired from the NHL just a season before coming back to the Island. The Crystals were led by Dave MacDonald who scored 17 goals in 17 games and had 42 points.  Bill Doherty of the Colonel Gray Colonels topped the league with 21 goals and 46 points. Summerside finished first in the standings and won the league playoffs over the Junior Panthers who were coached by Vince Mulligan.  The Panthers won the semi-finals, 3-0 over the Colonels.  The Crystals were eliminated by the Truro Bearcats in the Maritime playoffs in five games.  A year later the Crystals were back and took both first place and the league championship as they defeated the Colonel Gray Colonels, 4-1 in the finals.  The Glace Bay-Sydney Metro Bees won in five games in the Maritime playoffs. Greg “Giggy” MacDonald led Summerside in scoring with 19 goals, 37 assists for 56 points. Carl Trainor who played with Colonel Gray, won the league scoring title as he picked up 30 goals and 64 points.  The Island Jr. League was “B” league in its first two seasons but elevated to “A” status in 1973 which began the pursuit of the national Tier II championship that continues today.

The next six years belonged to Charlottetown under Coach Gordie Whitlock and General Manager Cecil Taylor. The Colonels (later Charlottetown Colonels, then Generals and Eagles) finished first three times and second three times over the half dozen years as they emerged as league champions each spring. A fierce rivalry built up between Charlottetown and Summerside and Sherwood-Parkdale in those years which would continue for the next four decades.

Although the Whitlock mentored Charlottetown Juniors did not gain the national spotlight the Sherwood-Parkdale Metros would late in the decade, they were a force to be reckoned with and won Atlantic/Maritime title four times during the six year run. In essence they were an Island dynasty with a tremendous fan following. No other junior team has had as much success since that time. Whitlock, a school teacher, was fair but asked each player to show discipline both on and off the ice and to play to the best of their ability each and every game. The Colonels had a curfew after games on the road and Whitlock made a point to each player on his team in the 1976 Maritime playoffs by benching his top scorer and the league’s leading goal scorer who came back to the hotel late and violated team policy.  Ray Dunn, a 61 goal man, sat out a game in Saint John in the Maritime playoffs for breaking team rules.  There was a plea put out by the players to keep Dunn in the line-up but the coach did not relent.  Without Dunn, Charlottetown lost the game on the Saint John 77’s home ice at the Lord Beaverbrook Arena.  Everyone kept the curfew after that and they did go on to win the series over Saint John.

Colonel Gray shook off the playoff loss and returned to the Island finals the following season in 1973-74.  The O’Leary Maroons finished first during the regular season led by the league’s top scorers consisting of a line the featured Robert Harris (28-50-78), Gene Kelly (30-29-59) and Mickey Callaghan (28-27-55).  Wilfred MacDonald of the Sherwood-Parkdale Lions tied for third (30-25-55). The Colonels Ray Dunn finished in fifth (25-27-52).  Colonel Gray defeated the Summerside Crystals in the finals, 4-1. The Charlottetown Juniors won the Maritimes, 3-2 facing the Moncton Hawks but lost to the Smiths Falls Bears of Ontario, 4-1 in the Eastern Regional playoffs. The Bears lost a dramatic 1-0 overtime game in the seventh and deciding game of the Centennial Cup in Ottawa to the Selkirk Steelers from Manitoba. The following season Danny Murphy joined the Bears in Smiths Falls for a season. He would later join his brother Kevin on the Charlottetown Eagles and would go on to be one of the Island’s most successful businessmen opening a chain of Tim Horton’s coffee shops and Wendy’s restaurant in PEI and the Maritimes. Kevin also got involved with the service industry and owns several restaurants in Charlottetown and the Holiday Inn Express hotel.

In the 1974-75 season O’Leary had its big line going once again as Robert Harris (35-66-101) and Mickey Callaghan (41-60-101) tied for the league scoring lead and line-mate Gene Kelly had 93 including a league leading 51 goals.  Greg MacDonald on the Summerside Crystals was fourth (31-53-84) and Paul Gormley of the Colonels was fifth (32-47-79). O’Leary also had the IJHL’s top defenseman in Larry Arsenault who also wone the Most Sportsmanlike Player Award. Gormley was the league’s MVP and joined Callaghan and Kelly on the All-Star team along with Arsenault and Mike Ready of the Colonels on defense. The All-Star goalie was Gerald Butler of the Montague Kings, although Kent Osborne was named top goalie with a 3.61 goals against average. Phil Handrahan named the Rookie of the Year with the Sherwood-Parkdale Lions. The Colonels defeated Summerside in the playoff finals in seven games and went on to sweep the Cap Pele Fishermen, the New Brunswick Jr. champs, in three games before bowing to the Gander Flyers, who swept them in the Atlantic finals, 3-0.  The scores were 6-5, 6-4 and 5-2 for Gander in a rough series.

1975-76 marked the fourth straight year the now Charlottetown Colonels won the Island Junior Hockey League finals after finishing in first place in the regular season. The Colonels swept Sherwood-Parkdale, 4-0 in the championship series.  Ray Dunn led the league with a record 61 goals and finished second to Mickey Callaghan of the Maroons in the scoring race. Callaghan with 57 goals, 72 assists and 129 points.  Dunn with his 61 goals, 58 assists and 119 points. Future NHL star Rick Vaive was seventh in the league with 42 goals, 37 assists and 79 points. The Colonels went on to defeat the Saint John 77’s in the Maritime playoffs and the Sydney Millionaires , 4-1 in a five game series in the regional finals.  They lost to the Rockland Nationals (from the Ottawa District) in the Eastern semi-final, who swept them four straight. The Nationals were coached by Bryan Murray, who went on to become coach and then general manager with the NHL’s Ottawa Senators.  The Nationals had two 40-seater planes charted for their fans to fly to Charlottetown for the series.   Rockland won the Centennial Cup facing the Spruce Grove Mets in Alberta.  Hit by high expenses, the team folded in 1977.

The Charlottetown Colonels became the DB&J Generals in 1976-77 and made it five straight Island championships. The Sherwood-Parkdale Metros finished first with a 33-5-2 mark in the 40 game schedule.  The Generals were just two points back at 32-6-2. The Montague Kings were a distant third (18-17-5), Summerside and the upstart Charlottetown Abbies were fourth (both 12-25-3). The Abbies gained fourth place because of a better record head-to-head with the Crystals.  West Prince Juniors finished last (5-34-1). Kevin Murphy won the scoring title (30-59-89) and by just a point over team-mate Rory Beck (35-53-88).  In fact Charlottetown had the Island Junior Leagues top six scorers rounded out by John Abbott (30-56-86), Shane Turner (40-43-83), Dunstan Carroll (35-47-82) and Ray Dunn (43-31-74). Laurie Downe of the Generals led all goalies with a 2.87 goals against average including two shutouts. Kenny Flanagan of the Abbies tied Rick Vaive’s rookie goal scoring record, set the previous season with 42. Charlottetown had 331 goals for which also set a record.  The Eagles defeated the Fredericton Red Wings in the Maritime finals but lost four straight to the Pembroke Lumber Kings in the Eastern semi-finals in the Centennial Cup playoffs. The Prince Albert Raiders swept the Lumber Kings, 4-0 to win the national championship.

Charlottetown went through another name change in 1977-78. The Generals became the DB&J (Douglas Brothers & Jones, a company that was involved in plumbing, heating, electrical, well drilling, appliances,  construction and even Mazda car sales) Eagles. Gordie Whitlock  was still at the helm with assistant coach Bob Doherty and GM Cecil Taylor.  The Eagles finished second again (24-8-8 in 40 games) while the Summerside Crystals were first (31-5-4).  The Eagles scored 60 goals less than they did in their record breaking season of 1976-77 but Rory Beck won the scoring championship (38-59-97) and finished ahead of Kenny Flanagan, now a member of the Crystals with the Abbies folded. Flanagan (49-40-89) led the league in goal scoring.  Kevin Murphy of the Abbies was third (48-29-77).  Sherwood (22-13-4) was third in the regular season. Montague came fourth (8-29-3) and Tignish fifth (2-36-2 and gave up 440 goals against, a new league record).  The Island Jr. League played interlocking games with teams from New Brunswick. Each team played eight games versus the mainland with PEI teams going 16-22-2 in 40 games. The Crystals were 7-1 and the Eagles 4-3-1. In the post season, Summerside , coached by Forbie Kennedy, swept the Montague Kings, 4-0 while the Eagles did away with the Sherwood-Parkdale Metros, 4-0 in the semi-finals.  Charlottetown then dropped the favoured Crystals, 4-2 in the league finals and won yet another Elmer Blanchard Memorial Trophy.  The Eagles eliminated the Federicton Red Wings, 4-1 in the Maritime semi-finals and defeated the Cole Harbour Colts in five games in the final series. The Guelph Platers ousted the Eagles, 4-2 in the Eastern Canadian Centennial Cup finals.  Guelph won the Centennial Cup in four straight games over the defending Canadian champion Prince Albert Raiders in the national finals.

1977-78 ended the Charlottetown Eagles six year run as Island champs.  The Eagles had landed.  They lost the Island Junior finals the following spring to their cross city rivals, the Metros.

It must be pointed out that the format for the Centennial Cup changed the following year from a Best of Seven final series to a tournament featuring the top teams from each region.  Charlottetown faced more series and more travel in its five year run after the Centennial Cup than teams would face after the tournament format came into being. That said, the tournament format proved equally as difficult with each team facing an almost must-win situation in each game.

As a footnote, the Atlantic teams competed for the Dudley Hewitt Cup each spring from 1974 to 1978 as they faced the Central Canada champions.  The Atlantic championship became the Callaghan Cup (named after PEI hockey builder, sports writer, and school teacher J. Pius Callaghan) which was competed for from 1979 to 1991.   Sherwood-Parkdale won the Callaghan Cup in 1979, 1980 and Summerside also won in 1989.  Charlottetown was Atlantic Jr. A champion in 1974, 1976, 1977, and 1978.  The Charlottetown Junior Islanders also won in 1971 and again in 1972. 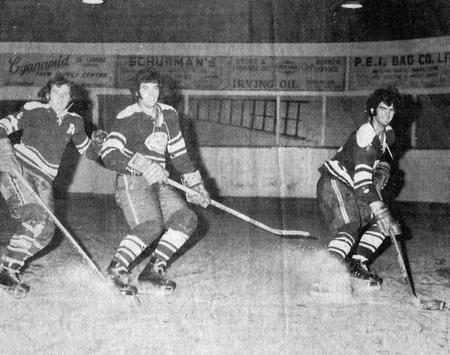 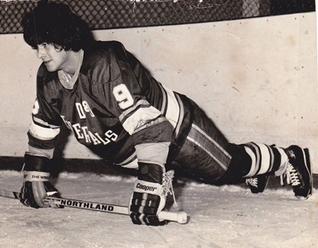